With the teachers' dispute predictably heating up, I thought it might be fun to take a look at the veteran labour relations practitioner at the head of the government's bargaining table -- someone I once knew well. 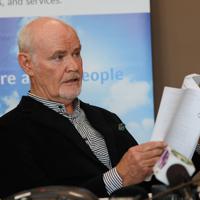 The last time I saw Peter Cameron was in 2002, when I ran into him at the Vogue Theatre, before a speech by Naomi Klein. But in the old days, when there were labour reporters, I may have talked to him as often as any trade union leader in B.C.

Back then, Cameron was in the forefront of the dramatic expansion of the Canadian Association of Industrial, Mechanical and Allied Workers (CAIMAW), a militant, independent Canadian union that made big inroads into the B.C. mining industry during the 1970s and 1980s. They did this by raiding bargaining units belonging to the United Steelworkers of America, taking advantage of the fact that many workers didn't like what they considered poor representation by the Steelworkers. (The workers weren't fans of the union's Pittsburgh headquarters, either).

Cameron was CAIMAW's chief mining negotiator, spearheading several long, difficult strikes and achieving real gains for union members. Tough and exceedingly smart, he cared deeply about improving the lot of workers, a commitment forged early on when, in defiance of his bourgeois background, Cameron joined the ultra-left Progressive Workers' Party and took a job at the Phillips Cable plant in Vancouver. The PWP, which inevitably fell apart, was headed by the legendary Jack Scott, once labelled by a national magazine as "the most radical man in Canada."

Cameron was not a worker in the normal sense. He was more of an intellectual who threw in his lot with the working class during the highly-charged politics of the '60s. But his undoubted intelligence and commitment attracted the admiration of Paul Weiler, the brilliant first chairman of the new B.C. Labour Relations Board, which became a labour relations beacon across North America during the mid-'70s for its groundbreaking decisions under the NDP's progressive new labour code.

Unable to afford lawyers, CAIMAW often used Cameron to argue its cases before the LRB. Weiler was impressed by the young union representative's grasp of labour law and his ability to hold his own against high-priced legal help on the other side. Cameron also thought highly of Weiler, who became a bit of a mentor. Much to the fury of the international unions and others within the so-called "house of labour," Weiler engineered Cameron's four-year appointment to the LRB as one of its union panelists.

However, none of that stopped Cameron from later provoking an angry scene at the LRB, after then board chairman Stephen Kelleher rejected CAIMAW's application for a representation vote against the Steelworkers at the large Cominco smelter in Trail. (Incidentally, the head of the Steelworkers' Trail local at the time was a young Ken Georgetti, who parlayed fending off CAIMAW into a rise in the ranks to president of the B.C. Federation of Labour and then to the Canadian Labour Congress, where he presided for 15 years until his recent, surprising defeat.)

The normally even-tempered Cameron was apoplectic over the decision. A number of CAIMAW types subsequently occupied Kelleher's office, which, given the quasi-judicial nature of the LRB, was not a cool thing to do. Cameron eventually apologized.

Not long afterwards, however, he had a bitter falling-out with the union that had given him a home for 15 years. He left CAIMAW (now part of Unifor) and shifted to the much milder Health Sciences Association, eventually becoming the HSA's executive director in 1990. In 1991, the Google gods inform me, he was invited by the Democrat Socialists of America to give a speech in Oakland about the virtues of Canada's health care system.

But the switch from CAIMAW militancy to the quasi-professional HSA seemed to spur a change in Cameron's comfort level, away from confrontation on behalf of workers to a more sedate labour climate. In 1992, he was appointed assistant deputy health minister by the NDP, winding up on the employer's side of the bargaining table for the first time. He liked it.

Perhaps appreciative of the bigger bucks (though he has never seemed to be in it for the money) and being allowed to operate in a rarefied atmosphere without being accountable to a pesky rank and file, Cameron never returned to the union side of negotiations, although he has on occasion acted as a neutral.

His high-water mark came quickly, when he helped broker a so-called "social contract" with B.C. health care workers not long after his deputy minister appointment. The package provided a shorter work week, more say in decision-making and job guarantees in community health care settings for union members, in return for accepting a 10 per cent cut in hospital jobs. It was a win-win deal at its best.

There's been nothing like that under the tight-fisted BC Liberals, but that has not appeared to bother Cameron. As a hired gun negotiator, he has bought into the mantra of government-imposed wage restrictions, never shy about reminding unions that any settlement, no matter how minuscule, must be within mandated guidelines handed down from the finance minister.

In 2012, before taking on the province's modestly-paid social services workers, Cameron helpfully advised them that his mandate did not allow for any increase in global costs.

During the current set of talks with the province's tenacious teachers' union, the former hard-nosed union negotiator has upped the ante. At one point, he made the ludicrous statement that meeting the teachers' demands would threaten B.C.'s credit rating. It was a cheap shot from a smart guy, who knows full well that the teachers' position at the table is a negotiating posture, and they would keel over in shock if the government suddenly agreed to it.

As an aside, Cameron's claim also flew in the face of some wise words from his former mentor, Paul Weiler. In a long-forgotten public sector dispute, Weiler brushed aside government arguments that it had no money to fund whatever wage increase might have been appropriate.

Weiler reasoned that money decisions by governments are political, not fiscal. Governments can always access sufficient money to fund what they choose to fund. If they need more, they can raise taxes or other fees, said Weiler. If they choose not to do so, that's a political decision, maybe even a good one. But it doesn't mean the government has no money or can't afford something.

At any rate, Cameron, backed by the government, is playing hardball against the province's teachers, who have, until now, been playing softball. His professed outrage that the BC Teachers' Federation has not reduced its wage demands is mostly showboating by a skilled bargainer playing to his government masters, the media and the public.

Cameron knows that any salary deal, if there is one, will have little to do with what the teachers are asking, but will depend on when teachers feel the government has offered a package they can accept. A decision by the BCTF to cut their demands by even 50 per cent, say, wouldn't bring the parties that much closer to a settlement, since they would still be outside the government's arbitrary wage limits. In fact, it's a charade at best to suggest that any real negotiations can take place over wages, given the government's guidelines in the sand.

Besides, the main issue is class size and composition, not salaries.

Far worse was last week's threat to cut teachers' wages by five per cent, should they maintain their barely-noticeable job action, and by 10 per cent, should they move to stage two involving rotating strikes, which the BCTF announced Tuesday is exactly what they plan to do. That's the sort of employer tactic that would have driven Cameron ballistic in the days when he was on the side of the workers.

Whatever the legality of the threat, it is quite a disproportionate response to teachers who have continued to fulfill their classroom teaching duties every day, compile report cards and involve themselves in after-school and extra-curricular student activities.

Cameron's overkill was almost certainly designed not to pressure teachers -- which is hard to do -- but to provoke them: a far easier task. So now we have a scenario the government may have wanted all along -- escalating job action by the province's teachers, which could pave the way for another contract imposed by legislation. At the same time, every day the teachers are out saves the government a bucket full of money.

Nice work if you can get it

Of course, the government has every right to flex its confrontational muscle and hire a capable guy to represent them in bargaining against a difficult union -- particularly someone who long ago abandoned his advocacy for workers. They just shouldn't pretend they're the nice, reasonable guys in this troublesome dispute.

Mind you, that kind of positioning is hardly new. It's the age-old dance for public opinion, with both sides doing the "we care about students" tango.

In the meantime, it's hard to imagine a better gig for Peter Cameron: a good per-diem; no messing around against mean mining companies; able to put the boots to his opponents on the other side of the table, while acting on behalf of an employer who holds almost all the cards; able to set wage limits the union cannot go beyond, with the power to legislate, if necessary; all the while serene in the belief he's the smartest negotiator in the room.

It's a tough job, but somebody has to do it.