[Editor's note: Green Party leader Elizabeth May made this speech in Parliament last week in response to Bill C-23, the Fair Elections Act, tabled by the federal Conservative government earlier this month. The legislation would up the amount federal parties can spend during elections, exempt as election expenses "the commercial value of services provided to a registered party for the purpose of soliciting -- by mail, telephone or other electronic means -- monetary contributions," and require voters to have ID other than a voter information card in order to cast a ballot, among many other changes. We reprint it for your consideration.]

Mr. Speaker, it is a great pleasure to be able to speak to Bill C-23 today. I want to pause and say that when we have these rushed processes with closure on debate and an abbreviated time to look at a critical bill, it is rare for me to have a speaking opportunity. Therefore, I want to thank the Liberal Party for giving me a speaking slot today. I do not know if I agree with them in every aspect of their objections to this bill, but I agree with many of them. 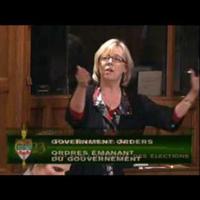 'The crisis in Canadian democracy is not that Canadians are voting more than once but that they are voting less than once': May on Fair Election Act

When I look at what we need in Canada to fix democracy, I remember a clever little ad put together by Fair Vote Canada. Don Ferguson of Royal Canadian Air Farce, one of my favourite icons of Canadian comedy, starred in it. He wore a white lab coat and started talking about the serious tragedy of electoral dysfunction in Canada, the failure to perform well when it came to elections.

I will not go down the [list of] double entendres that went through that Fair Vote Canada ad, but as members can imagine there were many of them. However, it did bring to mind the need for a prescription to fix an unhealthy system. The ad pointed to the issue of getting rid of first-past-the-post, which is fundamental to fair elections in Canada, and having election results which are then mirrored in the composition of our House of Commons.

We need reform. We need a Fair Elections Act. We need to deal with the unhealthy level of hyper-partisanship, the non-stop attack ads, and the fact that we have not gotten to the bottom of the robocall scandal of the last election. However, this bill is not it.

A real prescription for a healthy democracy is in our grasp and instead we get this bill that would weaken our electoral system, weaken democracy and further reduce voter turnout. We had an opportunity to sideline the cynical politics of non-stop attack ads that function as a "deliberate mechanism," which is the language used by political spin doctors, of voter suppression. The goal of non-stop negative advertising is to reduce voter turnout in the interests of another party.

A lot of things now pass for political prowess, for which anyone who loves democracy should hang their head in shame and be condemned from ever standing for election again. This is not about every party getting out and urging everyone to vote, as we have heard people from across the aisle say all day. Over and over again, we have examples of efforts to do exactly the opposite. I am afraid this bill is in that spirit of reducing voter turnout.

We could have, with this bill, pursued the reforms found in private member's Bill C-559, put forward by the Hon. member for Wellington-Halton Hills. That would have led to fairer elections. We could have leveled the playing field for financing so that members of Parliament who come to this place as independents have a fair chance to raise the funds they need to run for re-election. However, we did not.

The ways in which this bill would reduce the potential for a healthy democracy and worsen voter turnout need to be reviewed. Many of my colleagues in this place have given very eloquent, articulate and full reviews. In particular, I have to give credit and homage to my friend, the Hon. member for Toronto-Danforth, whose work on this bill was brilliant.

Let me point out what I would agree with. I may be a minority on this matter, but I do not really think it is a problem to create a commissioner for elections who operates out of the office of public prosecutions. I see that as an independent place. The problem is the government has not given that office any tools. It has not given that officer subpoena powers. What is worse is, for some reason, it has created a "black box" surrounding the work. It would amend the Access to Information Act to remove, from access to information, anything going on in the work of the commissioner for Canada's elections. They would also remove in the Elections Act the requirement to give any information about investigations.

What I also would agree with in this bill is the scheme to deal with the robocalls, to have a way of tracking who buys this kind of automated calling service. That is not bad. I would have voted for that.

However, the bill also includes a big new loophole for the spending of money. It now will not be considered an elections expense to spend money on activities that are considered fundraising for nomination candidates. That is an open door to abuse.

What is the worst part of this bill? This cuts to the core of democracy. This is a charter issue. I turn to a most recent statement by the Supreme Court of Canada on the right of Canadians to vote. It was a decision of October 2012. We are all familiar with it. It is in the name of the current member for Etobicoke Centre, so I will not say the name of the case. However, it was a strong decision written by Mr. Justice Rothstein and Mr. Justice Moldaver.

They had this to say:

The right of every citizen to vote, guaranteed by s. 3 of the Charter, lies at the heart of Canadian democracy.

In this instance, they did not find that those rights had been trampled upon, but that was because a lot of the provisions this bill would remove were in place. Therefore, I think this quote from the Supreme Court is timely and informs us, as my friend, the member for Victoria, recently pointed out, that this bill is probably unconstitutional. The following is what the Supreme Court had to say at the bottom of page 98 of the decision:

Our system strives to treat candidates and voters fairly, both in the conduct of elections and in the resolution of election failures. As we have discussed, the Act seeks to enfranchise all entitled persons,...

A voter can establish Canadian citizenship verbally, by oath.

That cannot happen anymore, not with this bill.

The court went on to say:

The goal of accessibility can only be achieved if we are prepared to accept some degree of uncertainty that all who voted were entitled to do so.

The Conservative members of the House and the minister have utterly failed to provide any evidentiary background for the notion that we have a crisis of voter fraud in this country. There is no evidence for the notion that Canadians are covering themselves up through creating false IDs and voting more than once. The crisis in Canadian democracy is not that Canadians are voting more than once, it is that they are voting less than once, and this bill would worsen Canadians' trust in the system and increase cynicism.

As for the treatment of the Chief Electoral Officer, talk about sharper teeth: they are all sharpened in the direction of going after Marc Mayrand. I find this shocking. He is a public servant, he is doing his job, and the job that was being done is now essentially going to be stifled.

When I worked on my last book, which was on the crisis in Canadian democracy ironically, I wanted to try to get to the bottom of why young people were not voting. Where could I find good research that informed that discussion? I found that good research because it was commissioned by Elections Canada. It started to inform political parties what we should do to ensure civic literacy and political understanding from the earliest possible moment.

I think it undermines political responsibility and civic understanding to refer to voters as customers. There is something fundamentally wrong with an Elections Act that talks about customer service when we are talking about voting. It is a right. It is not shopping, and every Canadian must be allowed to vote.

I cannot tell members how heartbreaking it is to hear from people, particularly young people, who have been turned away at the polls because they found that multiple forms of ID did not work. I remember hearing from a young woman in Dawson City when I was holding a town hall there on democracy. She said that she had tried twice. I asked her if she would keep trying and she said she did not know if there was any point, that they did not want her to vote.

I remember the tears in the eyes of an older man in Pictou County who had voted in his polling station during his 75 years until these new changes were brought in by the current administration, and he was denied the right to vote because he could not produce a photo ID. He did not have a driver's licence. His sister in law was working at the polling station, but under the rules she was not allowed to vouch for him because she had not gone there for that purpose. Under this new Act, we would see more and more Canadians turned away, disenfranchised by the false notion that we have a crisis in voter fraud. That is not our crisis.

We need to do everything possible to restore faith among the Canadian public in the health of our democratic system, and this bill takes us in the absolute wrong direction. Why would a governing party do this? Why is there such a rush to disenfranchise Canadians? Is there an election coming right away that we do not know about? Do we have to have all these new rules in place for First Nations, seniors, young people, the poor and the groups that advocate for those parts of our society that are more disenfranchised by having to produce government-issued photo IDs? Is that the point?

I am baffled and appalled and deeply shocked and troubled by this bill. The things in it that are good could have been so much better, but the things that are bad are unforgivable in a democracy.