You can say one thing for the powers that be in the banking industry. They've got a lot of nerve. 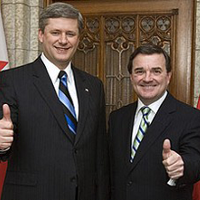 This past week our own Finance Minister Jim Flaherty, along with Mark Carney, the governor of the Bank of Canada, came out strongly in opposition to a modest proposal to regulate the U.S. banking system.

What a shameful spectacle. Less than four years ago the world was holding its breath for fear the crisis in the hyper-deregulated U.S. financial system would cause a second Great Depression. Now Canada and other foreign governments, cheered on by U.S. banking interests, are doing their best to block U.S. legislation that would curb the industry's worst excesses.

The initiative Flaherty and Carney attacked is a proposal by Paul Volcker, the former chair of the U.S. Federal Reserve. Simply put, the "Volcker rule" would prevent financial institutions -- U.S. or subsidiaries of foreign banks -- that are backstopped by U.S. taxpayers from behaving like hedge funds and trading for their own account.

Flaherty and Carney are trying to cast their opposition as standing for Canadian regulatory sovereignty. But since all five of Canada's largest banks drew on emergency loans from the U.S. Federal Reserve during the crisis, the U.S. certainly has a moral argument in favour of being able to regulate the behaviour of Canadian bank subsidiaries operating within its territory.

After the financial industry's speculative bets on the U.S. housing market went sour, U.S. and foreign banks got $1.2 trillion of the American public's money in emergency loans and $700 billion through the Troubled Asset Relief Program. The banks' weak defence is that they have paid all the money back -- an argument that can be challenged because the U.S. government is still holding the bag for bad deals the banks made with companies like AIG.

But why banks get to have first call on this extreme level of government resources when they get themselves into trouble speaks loudly about their influence over the political system. Analysts of the secret loans given to Wall Street during the crisis point out that $1.2 trillion they got is enough to cover all the 6.5 million delinquent and foreclosed mortgages in the U.S.

Secure in the notion that their companies were too critical to the global economy for the U.S. government to let them fail, CEOs of the big U.S. banks had continually ratcheted up the level of risk they tolerated in their trading divisions. It was a kind of "Heads I win, and tails, I still win" ultimatum to taxpayers that the Volcker rule would help put an end to.

So did Wall Street learn anything from its near-death experience in 2008? In the immediate aftermath of the financial meltdown, the heads of U.S. banks were called before congressional inquiries to explain what went wrong. Some of their statements suggested they were genuinely shaken by the scale of the catastrophe and understood the need for government regulation. John Mack, CEO of Morgan Stanley, admitted that government support had prevented "a collapse of the financial system." Mack stated that "the financial crisis has also made it clear that regulators simply didn't have the visibility, tools or authority to protect the stability of the financial system as a whole."

But that was then. Like a heart attack survivor who immediately goes back to eating fries and gravy, Wall Street's biggest firms have quickly returned to lobbying against regulatory reform. Even though during the financial crisis Morgan Stanley topped the list in the size of loans it drew from the Federal Reserve, now the bank is organizing international opposition to the Volcker rule.

Lobbyists from the U.S. banking industry are visiting foreign embassies like Canada's and issuing anti-Volcker rule position papers. According to one analyst, "The criticism of foreign governments on behalf of their banks is helping U.S. banks fight the rule."

Mark Carney, for example, is claiming that somehow the Volcker rule will do irreparable harm to the Canadian government's ability to sell its bonds and will "undermine the resilience of the Canadian financial system."

Simon Johnson, a former chief economist with the IMF, called Carney's criticism absurd. He wrote in the New York Times that he could understand why the big banks would oppose the Volcker rule because they want to continue to engage in high risk/high return activities with the implicit backing of the U.S. taxpayer. Johnson questions, though, why the Bank of Canada would be siding with Wall Street given that the Bank "would ordinarily be expected to take a broader perspective, at least aligned with the social interests of the Canadian population."

Johnson notes that Carney worked for Goldman Sachs for 13 years, but charitably says that he does not think this background explains Carney's position on the Volcker rule. I'm not so sure. Bankers make up the world's most powerful boys' club and Carney is clearly still a member in good standing. What better way to maintain that standing than by helping out your Wall Street buddies.

In his own clearly exasperated response to Carney's argument, Paul Volcker has written a Financial Times editorial explaining that nothing in his proposal would prevent American commercial banks from finding buyers for foreign government's debt -- they just would be prevented from speculating on this debt themselves.

Volker also points out that foreign governments seemed to be able to raise money in international markets before the U.S. market was deregulated in the 1990s to allow their banks to trade in this debt.

Volcker said we should "not be swayed by the smokescreen of lobbyists dedicated to protecting the interests of some highly compensated traders and their risk-prone banks."

There are two significant initiatives to try to avoid another financial catastrophe. In Europe, governments are proposing a financial transaction tax to curtail the turbo-charged speculation going on in securities markets. In the U.S., there is the Volcker rule, a key component of the Dodd-Frank financial reform bill. Canada is on record as opposing them both.

To use a Lord of the Rings analogy, Flaherty and Carney are playing the supportive roles of Orcs to the Dark Lords of international finance.