A straight-faced academic with a crew cut and sweater vest is making the packed room laugh using a projector and the branch of mathematics known as set theory. Up goes another Venn diagram. The left circle says "grandpa". The right, "erection". The grey area where they intersect is labeled "funny", and the crowd confirms that with guffaws and hurried tweets to their social circles. 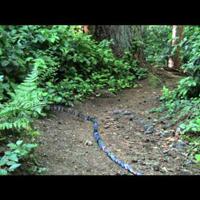 This is the custom here at the gruelling conference triathlon that is the South By Southwest (SXSW) festival in Austin, Texas, a 10-day arts and technology affair that this year drew more than 30,000 people, many of them 20- and 30-somethings in the technology, film and music sectors.

"Pull my finger" reads the left set of the next diagram. "Leprosy" offers some overlap, and again grinning faces watch their thumbs smear touch screens. I am but a wallflower at this social media party, for my devices are out of juice and the closest wall outlets are already dangerous tangles of smartphones. Next year I vow to pack a power bar, like the guy at the next outlet over who's getting swamped with kudos and high fives from new friends.

On stage, Peter McGraw, associate professor of marketing and psychology at the University of Colorado at Boulder, throws up yet another Venn diagram: "unpoppable pimple" reads the left set. The right: "cancer". Many fewer laughs this time, as expected. The latest diagram was designed after several drinks and was meant to prove that alcohol does make things funnier, albeit only to the joke teller.

Diagrams exhausted, the academic take on comedy continues. McGraw leans on historical references, formulas, peer-reviewed studies, curious findings from his "Humour Research Lab" and good old-fashioned jokes. Just as scientists before him sent a man to the moon, this one thinks he can break whatever code needs to be broken for us to understand what exactly makes people laugh. And to do that, McGraw has tiptoed away from a long-established study of judgment and emotion and cannonballed instead into the field of humour research.

A few weeks after the festival, McGraw calls me via Skype from Australia. He's on sabbatical in Melbourne, still spending every day trying to kill the world's three established theories on where humour comes from -- superiority, relief and incongruity -- or better yet, annex them all under a common banner he calls the benign violation theory (BV), an idea he explored at length in a 2010 article in the Journal of Psychological Science.

McGraw's central argument builds on the work of linguist Thomas Veatch, who felt humour originated from feeling normal and violated at the same time. McGraw, once the head coach of the men's lacrosse team at Princeton and now a tenured professor in his early 40s, adapted Veatch's ideas and began to share them through social media, speaking engagements, trips around the world and now, a book deal.

"Humour, unlike a lot of other positive emotional experiences, comes from a counterintuitive source. It actually has its roots in potentially negative experiences, in situations that are threatening, unsettling, wrong or, as we say, a violation," he says. "But of course, most things that are wrong, unsettling or threatening create negative emotion, so there needs to be another judgment there, another appraisal of the situation as being safe, acceptable or in some way OK. Our overarching term for that is 'benign.'"

Back in the early days of humour theory, Plato and Aristotle felt the feeling of superiority we feel over other's shortcomings fuelled the best jokes. Hobbes later said humour arose from sudden glory over others. McGraw interprets those as examples of his benign violation theory. Basically, someone is feeling bad, but it's not you, so it's funny. The Germans might have called it Schadenfreude, but McGraw distills it into a formula: comedy = tragedy + distance.

McGraw reads Freud's relief theory of humour the same way. What else is it if not a benign violation to make jokes as a release of taboo, sexual or aggressive tendencies pent up by repression? he says.

"We can't laugh at aggressive things typically, but when they slip out in ways that are accidental or not harmful, then we delight in those kinds of things."

Today's leading paradigm of humour is the incongruity theory, which include the likes of Kant and Kierkegaard. Incongruists believe humour is a response to some ambiguous or inappropriate stimulus. McGraw argues the theory is imperfect when taken alone.

"The problem is many of the things we don't find humorous have those very same episodes of incongruity," says McGraw.

"In other words, I could say all kinds of random shit to you right now, but you might not laugh?" I venture.

"Exactly," he replies. "I would experience shock, but it would be offense and I would very clearly not be laughing."

Are we feeling benignly violated yet?

The benign violation theory proposes a very simple alternative recipe for humour: start with something perfectly normal, then taint it with little violating details, the way Jerry Seinfeld injects bits of horror into ordinary situations. Or start with something that's obviously wrong and find a way to make it OK, the way Sarah Silverman does by turning possibly insulting rants into cutesy stories. Moving too far in either direction runs the risk of boring or offending, but aiming for that sweet spot in the middle has a number of practical applications, says McGraw.

For starters, he says it offers a chance to reform awful comedians. He often fights with comics who feel he's wrong to think he can "solve" for the root of humour, but he maintains even unfunny people can be trained to get funnier, the same as you can train a couch potato to best an active person at tennis, or help your neighbour's ambitious but annoying tuba habit by sending them to music theory lessons.

"Like a magician, the comedian wants to have some air of mystery. To reveal the trick may actually hurt the entertainment aspect of it all," he says with some sympathy. "Another thing is, to crack the humour code in some way may take this thing that does seem so difficult, so special, and make it less special in their eyes."

McGraw also has tips for comedy club owners: lower the lights, because anonymity is disinhibiting, lower the ceiling to help laughter bounce and echo, add red curtains or brick walls for drama, and top it all off with uncomfortable chairs packed tight (a little dose of violation).

The bigger ambition, of course, is to understand where laughter comes from in order to create more of it. How to explain, for example, those instances where the source of humour seems totally senseless, like those "too soon" jokes that follow tragic events?

They're merely a way to cope with the daily horrors of life, McGraw advises.

"If you were so affected by the stories of rape and destruction and tragedy that come with being a reporter, or the loss of life and pain associated with being an emergency room doctor, if you had to carry it with you every day, that will lead you to depression," he tells me. "That will lead you to not enjoy your work, work that's really valuable."

Some discretion on the blackest of workplace humour advised, of course.

McGraw's work is far from finished. While his Humour Research Lab continues to experiment and publish in academic journals, he recently took his studies into a more public realm, turning a digital writing collaboration with a Denver-based journalist into a global tour and scoring a 2014 book deal with Simon and Schuster.

As part of that project, he traveled to Palestine in search of humour in a place that's seen a lot of pain, to Denmark to explore last decade's Muhammad cartoon controversy and to the Amazon, 100 hospital clowns in tow, to see if laughter really was the best medicine.

He even performed at Montreal's Just For Laughs Festival. It was a second chance to illustrate his benign violation theory in practice, following, in a wry turn of events, his desperately boring stand-up debut months earlier.

"Let's just say I couldn't have done much worse," he says, laughing. "If science can map the human genome, why can't it crack the humour code?"