If you talk with Andrew MacLeod, you notice he has a patient and persistent air about him. These are helpful traits for someone who has worked full time at The Tyee covering politics and public policy from Victoria since 2007. During that span, he has written at least 1,500 Tyee stories as well as stories for other publications, plus two books. No small feat.

Beyond persistently putting pen to paper (or pixels to screen), Andrew and Suzanne, his partner of almost 30 years, have two teenage daughters, a canine companion and a garden that, save for the vegetable patch that produced beautiful garlic this year, is a little neglected with the business and busyness of life. Weekend hikes with Suzanne are a highlight, and while not as adventurous as their bus trip from Victoria to Nicaragua in their 20s, provide some grounding moments from the pace of work.

Nearly 30 years ago, MacLeod was a co-editor of the Martlet at the University of Victoria (along with The 100-Mile Diet author Alisa Smith), and about a year ago he agreed to be on the paper’s board, which he describes as a strange full-circle feeling.

MacLeod will ground his Three Things interview in three pieces of work he’s written spanning 2004 to 2019 and discuss the themes that run through them. Three Things is a short and informal livestreamed interview show, where we pick the lovely brains of folks in The Tyee family to see what’s on their minds. 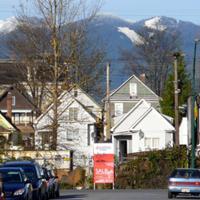 On Canada’s Life and Death Map, What’s Your Address?

MacLeod’s conversation will touch on welfare reform, the social determinants of health and employment insurance. He will discuss how government policy plays out in individuals’ lives, the conditions of our social services as we headed into the pandemic and the results, as well as how seeing long-ignored gaps addressed should affect our expectations going forward.

Aside from seeing friends and family, some of the things MacLeod misses during the pandemic are live music, the Victoria Highland Games (he plays the Scottish small pipes) and the European cycling season. He is appreciative of the extra time with his daughters, who would be farther afield otherwise, but acknowledges that the timing of the pandemic in young people’s lives presents a much larger disruption. He hopes that in the future, they’ll be able to look back and appreciate some of the current moments. By the time that happens though, we expect to see another 1,500 Tyee stories from him.

Join us on Wednesday, July 15 at 1 p.m. PST, when I will have the delight of chatting with MacLeod. Register here for the webinar or follow us on Facebook and YouTube where the livestream will be broadcast.