The Tyee’s Christopher Cheung has been thinking a lot about cans recently.

It’s not that the beloved urban affairs reporter is a big pop or beer drinker.

In the first edition of Three Things, a new Tyee live interview series, Cheung says he “can’t help but see a can today and think about binners,” people who collect cans and bottles and return them to depots. With fewer people congregating in public spaces, and only one recycling depot open, these are hard times for the binner community.

So what do binners have to do with three things related to Cheung? They are members of three groups that he wants to hear more from in pandemic coverage — low-income people, frontline workers and immigrants.

Cheung shared his thoughts with Tyee outreach manager Emma Cooper over Zoom while people in the Tyee community watched and listened, and the session was recorded so you can catch it any time you wish.

Tyee publisher Jeanette Ageson said the Three Things series is a way readers can get to know the people who make The Tyee happen.

“Ever since we all started working from home, we’ve been doing daily video calls on Zoom at noon,” she said. “It’s become a new part of our routine to start our calls with a show-and-tell, something from our homes that we share with our co-workers. It’s become something that we look forward to, so we thought we’d widen the circle a bit and share the experience with our readers and supporters.”

Low-income people have been at the top of Cheung’s mind. He recently spent time with Stanley Woodvine, a homeless writer and blogger who often bins.

Woodvine told him “people are living now like it’s the weekend every day,” Cheung recalled. Looking for cans in garbage bins revealed more take-out and alcohol containers — and discarded fruits and vegetables.

But “people” doesn’t mean everyone.

“We have a lot of different crises going on in Vancouver,” said Cheung. The pandemic is creating divides between “who gets to stock up, and who doesn’t, who has a car and who doesn’t, and people who get to work at home, or work at all.”

In his experience, frontline workers not in health care are still largely missing from the conversation, as are immigrants and refugees in Vancouver. 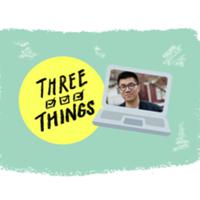 Cheung shared the experiences of three building cleaners — all immigrants — doing thankless and low-paid essential work in a Tyee story.

In another piece, he wrote about how the pandemic was changing life for Chinatown seniors.

People keep talking about the pandemic revealing gaps in the system, Cheung said. But the people he’s interviewed have said there’s not much new — the system has never worked for them. It’s one of the reasons he feels “very angry when I hear the argument that COVID is an equalizing experience.”

Building trust with people and telling their stories has certainly been challenging in a time of social distancing, Cheung shared during the viewer question period.

But it is still central to his work as a journalist.

“There’s a lot that can be learned from talking at length with someone about what they’re going through,” he said.

And watch our newsletters — you can sign up here — for a Zoom link for next week’s edition with The Tyee’s culture editor Dorothy Woodend.