The Tyee's list of abuses of power by the Stephen Harper government is now available as a free, downloadable PDF, readable on many digital tablets. 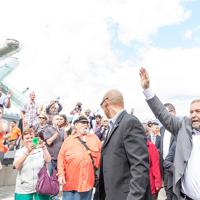 "Stephen Harper, Serial Abuser of Power," drafted by Tyee founding editor David Beers and contributors, showcases various assaults on democracy by the prime minister and his Conservative government over the past nine years.

Tyee readers submitted their own ideas, which were researched and verified to create the final, 70-item list of scams, smears, slimes and stings. The result is an omnibus of abuses, we think you'll agree.

This list is free of opinion about Conservative positions on the issues. It's not intended to advance any ideology or political party. Rather, it's a detailed portrait of the ruling party's record of breaking laws and breaching ethics that every party must be expected to honour.

For example, did you know the Harper government was the first in Canadian history to be found in contempt of Parliament? Or that the Conservative party has violated elections laws or ethics at least 17 times? Or that Harper's team defied a court order demanding it share info how tax money is spent, denying it to Canada's independent budget watchdog 170 times? Or that the Conservatives outraged the Canadians Taxpayers Association and others by spending some $750 million in public money on partisan ads to promote their own party?

Spying on critics, smearing opponents, sabotaging committees… It's all here, documented and sourced for the fact-checking skeptic.

With mere weeks until election day, The Tyee is offering the PDF as a reminder of the Conservative government's record of abusing its democratic responsibilities over the last nine years. We think it's an effective treatment against media amnesia.

It was designed by Luke Vorstermans of Main Street Magazines, who contacted The Tyee after reading the list and offered to turn it into the PDF format. "Sometimes ordinary citizens get motivated to put their muscle to shaping the future. This 'ebook' is just my way of participating in that process," he said.

The abuse of power list is one of The Tyee's most widely read and highly shared articles of all time. More than a quarter million Canadians have read it so far.

In a Globe and Mail column, Lawrence Martin wrote of the Tyee compendium: "Any smart opposition leader would be trying to get this list to every household in the country."

Columnist Gerald Caplan, also with the Globe and Mail, agreed that the list merited pick-up from opposition leaders: "Last week the Tyee online newspaper powerfully documented 70 Harper government assaults on democracy and the law. That's right -- 70 different cases. Opposition leaders mysteriously chose not to utter a peep about this crucial matter during that first leaders' debate. But civil society is on fire about it."

If you're on fire about it, too, we highly recommend downloading and sharing this version of the Harper abuse of power list.