The Battle of Alberta is about to begin, as is the Battle of Florida. Can you offer a preview?

That depends. The Battle of Alberta, pitting Edmonton against Calgary, will be hard-fought and closely scrutinized by professional referees who will ensure the rules are respected and fairness results. But that's just if you mean hockey. Otherwise the Battle of Alberta will be like a prison fight with homemade knuckle dusters and shivs made of sharpened toothbrushes. A hockey game is a pillow fight by comparison.

Representing Calgary in this true Battle of Alberta is Premier Jason Kenney who faces a UCP leadership review on Wednesday. Votes are in the mail but already a video review is in the works.

Elections Alberta has received a complaint of bulk ballot-buying, with over 4,600 UCP memberships being purchased using only eight credit cards. However this is not unusual, if you are a seahorse. Seahorses can give birth to as many as 2,000 offspring at a time and whether they are picking up a quick snack at Gilly's Krill Grill or buying UCP memberships, it's Mom and Dad who foot the bill. (Some will point out that you don't see many seahorses in Alberta, to which a seahorse might answer, “Yes, and at these aquarium prices you won't see many more.”) Anyway, enough quibbling about who is bulk-buying from whom. The real issue is creeping socialism.

To belabour the hockey metaphor — and that's what we do here — Wednesday's vote isn't really the equivalent of the Flames–Oilers face-off. That's still to come with Rachel Notley suiting up for Edmonton in the next provincial election. Wednesday is more about whether to fire the coach. Unlike the Flames, Kenney won't be able to claim a narrow victory with a thrilling overtime goal either. If the result is not lopsided, he could find himself facing a player's strike. Some of his team could even end up playing for Buffalo — that is, the newly formed Buffalo Party of Alberta. The, umm, chips are down.

Hockey-wise it's been an interesting season. The Calgary Flames just won a tough series against the Dallas Stars, which had to be difficult for Premier Kenney. Surely his loyalties must have been torn — Kenney has got to be a secret Texan. He probably downloaded the Gov. Greg Abbott filter on Instagram. It's traditional for political leaders to make a friendly bet on the outcome of such contests, with the loser agreeing to wear the winner's team jersey or something.

Kenney probably wanted to swap jobs instead. How the Alberta premier must sigh as he contemplates running a state where the governor can first pose like a defiant Spartan on the Mexican border, and then fight the greedy migrant babies stealing milk from the mouths of helpless American children. Paradise.

Then there's the Battle of Florida, which on the ice means the Florida Panthers against the Tampa Bay Lightning, and off the ice means Gov. Ron DeSantis against Mickey Mouse — or for that matter Gov. DeSantis vs. 21st century concepts of human dignity. 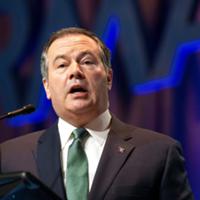 Ron DeSantis is like a cat who has figured out how to work door knobs and realizes that everything is now possible. In the penumbra of the Trump era, DeSantis has come to understand that there are no depths too low for Republican voters. Today he fights Disney for refusing to countenance homophobia; tomorrow perhaps for failing to segregate drinking fountains. Who knows? For Florida Republicans it appears there is no bottom (except the one you have to kiss at Mar-a-Lago).

In such times playoff hockey comes as a blessed relief. It's wonderful to relax into that familiar world where the home team's goals are announced like the discovery of insulin and the opposition's like the disclaimers at the end of prescription drug commercials, a world where transgressions have consequences and the numbers on the scoreboard actually mean something. Not to mention a world where you can find ice in Florida — proof, as Gov. DeSantis might say, that climate change is just another liberal myth. Close the drapes and enjoy the game.