Albert Einstein once said “The definition of insanity is doing the same thing over and over again and expecting different results.” Do you think that's true?

No, Dr. Steve does not think that's true. Any of it. For one thing, there is no evidence Einstein ever said it. For another, if that were the definition of insanity anybody who ever got married a second time would be called a certified loon. Betting on the Toronto Maple Leafs would result in forcible confinement and shock therapy. Anyone who watched more than one episode of The Big Bang Theory would be judged non compos mentis and placed under the conservatorship of Britney Spears' dad. Actually not bad ideas, but we digress.

Dr. Steve does believe this, though: If Einstein were alive in the year 2021 he would define insanity as politics. The two are becoming indistinguishable.

Insanity appears to be the official policy of the Republican party. Today's Republicans are mainlining bat guano. They're watching a movie rated “L” for loopy. They are the caretaker and they have always been the caretaker. They have lost the grip on their butter churns. They are nuts. And their insanity is entirely voluntary.

This is not to say that each individual Republican is mentally deranged. Far from it. Some certainly are, as the ongoing QAnon craziness proves. But most have simply chosen a political course that has inexorably led them, step by step, into lunacy.

Take Rob Schmitt. A former Fox & Friends couch-warmer, he's now a host on righter-than-thou Newsmax, one of several networks that exist primarily to amplify the ravings of the 45th (and according QAnon sources, 47th) President of the United States. Schmitt recently offered these musings on vaccines: “I feel like a vaccination in a weird way is just generally kind of going against nature. Like, I mean, if there is some disease out there — maybe there’s just an ebb and flow to life where something’s supposed to wipe out a certain amount of people, and that’s just kind of the way evolution goes. Vaccines kind of stand in the way of that.”

It hardly needs pointing out that, as articulated here, Schmitt's philosophy is not only anti-vaccine — it's anti-penicillin. It's anti-medicine. Cancer? Tuberculosis? Lions tearing you limb from limb on the Serengeti? Just go with it, says Rob. Nature is beautiful.

A Republican mouthpiece on national TV essentially claiming that eradicating smallpox was a crime against nature — it's insanity. And yet it follows the Trump line like a string of runway lights. Trump wanted to downplay COVID because it made him look bad; he continues to deny its significance because it is a blood-red stain on his wretched legacy. Therefore Republican sycophants must speak out against vaccines, medical authorities and medical progress itself. In GOP-run Tennessee, all vaccine outreach to children and teenagers, not just COVID vaccines but any others, has been halted. Attendees at the recent Conservative Political Action Conference event lustily cheered the news that many Americans are refusing vaccination. Florida's Opportunist-in-Chief Ron DeSantis is now actively vilifying Dr. Anthony Fauci. Fealty to Trump means declaring war on medical science. Wait till MAGA folks find out Viagra and Preparation H are socialism. Rob Schmitt says your hemorrhoids are just the Circle of Life.

Of course Canada has its own brands of politic craziness. Exhibit A is whatever the hell the Green party is up to. At least no one else is really affected by it — it's not a reason for public concern so much as a reason to make popcorn.

There's also a report that Canucks general manager Jim Benning is open to trading Brock Boeser. Not politics, but it is a special kind of insane. Just in case it happens we should probably get a head start nailing plywood over the windows in downtown Vancouver.

And there's always Alberta. Wannabes, really — Jason Kenney only dreams of being Texas Gov. Greg Abbott. Google “Greg Abbott” and the results are a barmy buffet. Gov. Abbott wants to build a wall on the Mexican border, restrict voting rights, and arrest Democrats; he's defunded the state legislature, signed a bill banning abortion after six weeks, and in a courageous move to deal with the number one existential crisis facing America, signed a bill requiring sports teams to play the national anthem before games. 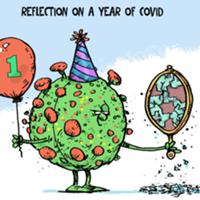 Please Advise! What Have We Learned in Our Year of the Plague?

Kenney cannot keep up with that Texas-size firehose of ideological sewage. But bless him, he can try. Kenney has launched his own version of Abbott's national anthem shtick by announcing a referendum on equalization payments — an issue over which the province, and potential referendum voters, have absolutely no say. Another referendum will involve picking senators. Another referendum will give voters a chance to decide on Prime Minister Justin Trudeau's facial hair. Another referendum will decide whether a Creamsicle should be allowed to melt off the stick on a hot day. (Some of the preceding Alberta referendums are real.) Meanwhile Kenney's “Mission accomplished” declaration concerning COVID regulations appears to be having worrisome effects. To say the Alberta situation is headed south is doubly accurate in this case.

But then, that's just politics — not so much insane as deeply, poisonously cynical. Unfortunately as U.S. Republicans have shown, following a political and ideological agenda to its illogical conclusion can ultimately lead somewhere else — to a cozy upstairs room with Norman Bates' mother.

P.S. to Jim Benning: Do not trade Brock Boeser or Dr. Steve will lose it.