Steve Burgess is an accredited spin doctor with a PhD in Centrifugal Rhetoric from the University of SASE, situated on the lovely campus of PO Box 7650, Cayman Islands. In this space he dispenses PR advice to the rich and famous, the troubled and well-heeled, the wealthy and gullible.

John Horgan and the NDP have won a solid and convincing majority in B.C. What's your takeaway from the 2020 pandemic election?

You will have to pardon Dr. Steve — he is still a little upset. Only last week he had been shopping for a private yacht — sales-tax free under a prospective BC Liberal government, you know — but as of Saturday night that luxurious boat has sailed. Also dashed: Dr. Steve's grand scheme for a prestigious and highly profitable quasi-religious cult to be run from international waters. Thanks, Horgan.

The election results were pretty much bang-on what the polls predicted, and yet for veteran observers of the B.C. political scene they are still a little hard to process. Yes, the NDP have formed governments before. But this is different. Suddenly they are the New York Yankees. The NDP have always been scrappy political underdogs, under-funded, over-performing Tampa Bay Rays at best, even when they manage to eke out a win or, as was the case four years ago, essentially a tie. We are just not used to seeing them as some sort of inevitable juggernaut. This season they replaced veteran stars (Godspeed, Carole James) with new talent and still rolled over the hapless opposition. Top teams need big stars. And it would seem the NDP have themselves a slugger. “Babe” Horgan has got that power swing. Hits for average, too.

If the overall result was pretty much as expected there were certainly shockers hidden in the details.

The fact that NDP candidates are leading in both Chilliwack ridings is a bit like hearing Frodo and Sam have been elected president and vice-president of Mordor. Former Vancouver mayor Sam Sullivan was defeated in Vancouver-False Creek, as was Mary Polak in Langley.

But Dr. Steve was particularly taken aback at the defeat of Richmond-Queensborough Liberal MLA Jas Johal. Johal had to be considered among the frontrunners to replace BC Liberal Leader Andrew Wilkinson. There were times over the past few years when a regular TV news viewer would be forgiven for thinking Johal was already in charge, given that he has been the go-to spokesperson for reporters seeking critiques of government initiatives. One could argue that his high profile worked against him, making him a particular target — being Andrew Wilkinson's wing man is not likely to make one Mr. Popularity. But it seems more likely to Dr. Steve that Johal just got stranded in the general ebb tide. Still, it can't help his leadership prospects. You might just as well kick off your campaign with a water balloon drop.

Elections are not morality plays — just as frequently they turn out to be grim fairy tales. But this vote certainly offered some tidy parables suitable for the proper education of the young. There was the sight of North Vancouver-Seymour MLA Jane Thornthwaite, she of the infamous Zoom smearing of Bowinn Ma, zoom zoom zooming away over the horizon like a thwarted Rumpelstiltskin. Langley East rainbow crosswalk opponent Margaret Kunst, currently trailing, may soon join her in defeat, although mail-in votes must be tallied before we can draw any moral lesson there.

Same is true for Laurie Throness in Chilliwack-Kent. The candidate tossed from the Liberal caucus for his free-contraception-equals-eugenics comment is down by a couple hundred votes, but his ultimate defeat is far from certain. There may yet be a glimmer of hope for Throness's giant “hands of stone” project. Giant fingers crossed.

What comes next? A Liberal leadership race for sure. Some are no doubt waiting for a moderate candidate like Michael Lee to claim the Liberal throne. But will the Liberals really opt for their own Horgan to battle the current one, like Godzilla vs Mecha-Godzilla? 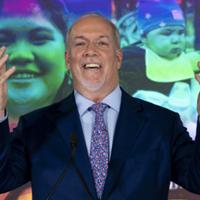 The BC Conservatives will be hoping so. They racked up enough votes in some Liberal ridings to doom the incumbents. If the Liberals decide that they are tired of being the natural home of Throness, Kunst et al., the Conservatives could well be right there with big, shiny dog whistles to claim that Liberal turf. Which is why your humble prognosticator suggests you keep breathing while waiting for a kinder, gentler BC Liberal Party. There are still plenty of red meat conservatives in this province, and those are the people who tend to participate in party leadership votes.

And how about Premier “Babe” Horgan? How will he spend his new political capital? Steady as she goes on the COVID-19 front of course. But trained political surgeon Dr. Steve suggests the premier may soon decide to amputate a gangrenous limb known as Site C. Get it out of the way early in the mandate — admit defeat and start the process of shutting things down.

Now here's a scenario: Let's say Laurie Throness survives the mail-in tabulation process and sits as an independent. Unwilling to abandon his cherished giant monument project, Throness comes up with a savvy variation — using the earth and rock removed for the cancelled Site C to construct a massive mound sculpted in the likeness of Premier Horgan. Throw in a Wacky Bennett sculpture for political balance. Majority passage will be a slam dunk. Now we just need Throness to pull through. Let us pray, my friends.