Alberta Premier Jason Kenney’s most recent political career is defined by battling perceived inequities with Ottawa. The province’s municipalities seem to feel the same way about their lopsided relationship with the legislature.

"The real fiscal imbalance in this country is not between provinces and regions, it’s between cities and everyone else. Taxpayers in the cities pay the freight… If you want to talk about fair deals, I’m happy to have that conversation."

A study from 2014 showed the Alberta government took in $2.7 billion more from the City of Calgary than it returned in provincial funding — an imbalance that ballooned from $883 million in 1991.

While rural Albertan municipalities are being told by the premier to eat $173 million in unpaid property taxes from oil and gas companies, the province’s largest cities have their own fiscal indignities to deal with.

Kenney’s government slashed funding to the City of Calgary by $73 million in its last budget, and imposed a $13-million cut in funding for Calgary police — the equivalent of 130 full-time positions, the chief of police said.

"From a government that prides itself on law and order, the fact that the biggest whack by far that they took to the city’s budget was to the police, is pretty surprising to me," fumed Nenshi. Calgary city council was forced to cut $60 million in program spending, with the remaining $13 million coming out of capital reserves.

Running an effective government is hard when senior partners exercise arbitrary authority over budgets and policy.

Calgary has been trying to expand public transit capacity and has an agreement with the province to go ahead with the Green Line LRT project, which the city says would create 20,000 jobs and move up to 170,000 people a day. Instead of providing stable predictable funding, the Kenney government last fall passed Bill 20 that allows the province to cancel committed infrastructure funding to local governments without cause and only 90 days’ notice.

Provincial funding cuts also forced the Calgary Board of Education to axe a popular transit pass program that helped low-income families cover the cost of getting children to school.

Alberta’s largest city already has a 10-year funding gap for infrastructure spending of $5.7 billion. Rather than expanding services for a growing population, Calgary councillors report that they can only maintain legally required municipal assets and essential services. Other urgent priorities languish on the drawing board, with potentially disastrous results.

In spring 2013, Calgary experienced massive flooding, which at the time was the most expensive natural disaster in Canadian history. (It was later surpassed by the Fort McMurray wildfires, also climate related.)

The entire downtown was closed, 75,000 residents were displaced and damage topped $5 billion. Plans to expand existing emergency mitigation measures like flood barriers and storm water systems are now on hold — replaced instead by hope and wishful thinking.

Funding for affordable housing in Calgary has also been chopped by the Kenney government. The publicly funded Calgary Housing Company had an 8.3-per-cent cut in provincial contributions in 2019. It doesn’t have enough money to cover maintenance on its existing buildings, let alone add housing.

About 81,000 families require affordable housing in Calgary, a number expected to rise to 100,000 in the coming decade. The city requested $46 million from the province last year to match federal and municipal funding that would pay for projects to help meet this demand. In a letter last month to Alberta Finance Minister Travis Toews, Mayor Nenshi warned, "provincial investment is needed to leverage federal funding… Without your government’s investment, federal funds will be left on the table." But is affordable housing really that important?

Last month the Calgary Zoo cancelled its weekly penguin walk because staff determined it was too cold for the Antarctic birds to venture outside safely. Many of the almost 3,000 homeless residents of Calgary were not as lucky.

Beyond obvious issues of safety and human dignity, slashing support for the province’s most vulnerable is also a poignant example of pound foolish public policy. Providing affordable housing is one-tenth as expensive to taxpayers as the economic costs of homelessness on the health care system and emergency shelters.

Local institutions are also getting hammered by provincial budget cuts. The University of Calgary was forced to lay off 250 staff.

In the midst of this budgetary bloodbath, Kenney — the supposed warrior for local political sovereignty — floated the ironic idea that cash-strapped municipalities should be required to "obtain the approval of the provincial government before they can enter into agreements with the Government of Canada."

Expect more meddling in municipal affairs from the UCP government and its federal allies in the coming year. Alberta Municipal Affairs Minister Kaycee Madu said in a speech last month that the province is considering amendments to the Local Authorities Elections Act.

Many local leaders fear this will lift third-party spending restrictions intended to protect these contests from outside partisan interference. Madu denied this was their intent, however there are obvious reasons to be skeptical. 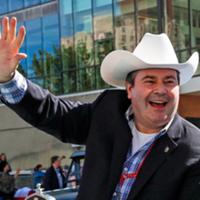 Kerry Diotte, the Conservative MP for Edmonton-Griesbach laid out the actual agenda during a panel discussion at the Manning Institute last November. "We should get in front of this," Diotte warned the friendly crowd of UCP supporters. "City councils and school boards are a breeding ground for socialists who will later cause us a lot of trouble as members of Parliament and the legislature."

The Alberta budget is due Thursday, and there will likely more municipal bloodletting and ham-handed interventions in local affairs. Last year the UCP tore up the long-fought-for City Charter agreements that gave Calgary and Edmonton long-term funding and authority to plan for the future. The two are home to over half the provincial population and GDP.

As the fossil fuel industry lurches towards the grave, one would hope the province would expand support to urban centres that will help nurture a more diversified Alberta economy.

Or does Kenney only care about defending local control when it results in more power for himself?