Tourism is big business in B.C. — too big. According to the government’s Strategic Framework for Tourism in B.C. 2019-2021, we had 6.1 million international overnight arrivals in 2018, and in 2017 tourism brought in $18 billion for restaurants, retail stores, accommodations and transportation, tourist attractions and events. Victoria’s tax share was $1.2 billion.

“For every $100 million in tourism revenue,” the framework states, “it is estimated that there is a further $69 million in economic spin-off which supports local communities.” The framework intends to “drive demand to ensure B.C. remains a top travel destination,” including “province-wide connectivity and Wi-Fi access.”

Yet one word keeps recurring throughout the framework like a nervous tic: “sustainable.” We want to grow the “visitor economy,” but “sustainably.” That growth and sustainability might be contradictory goals is not discussed. The framework wants to “foster year-round tourism growth and provide world-class tourism experiences while preserving and protecting our natural environment.” That environment, after all, is what has attracted millions to “Super, Natural British Columbia”®.

B.C. tourism, like tourism everywhere, wants to have its cake and eat it too. It wants to grow without becoming overgrown and defeating its own purpose.

But that may simply not be possible. The more successful a destination, the more it’s likely to suffer “overtourism,” a blight now affecting cities like Barcelona and Venice.

Precisely because tourism is now such a key economic factor, overtourism worries the hell out of governments everywhere; that’s why they keep repeating the mantra of “sustainability.” Overtourism not only damages the visitor experience, but also threatens the environment, global health and the climate.

That enormous growth was made possible by global prosperity: by 2015, over three billion people were in the global middle class. The triumph of Deng Xiaoping’s economic policies, for example, showed that to get rich is indeed glorious — 10.5 million Chinese travelled abroad in 2000, and 145 million did so in 2017. By 2030, the authors predict, the number will be 400 million.

In 2017, the Trudeau government published Canada’s Tourism Vision and set a goal to cash in the Chinese market: “The number of tourists from China will double, by 2021.” That goal probably went glimmering after the arrest of Meng Wanzhou in December 2018, but no doubt other markets beckon.

To support this increase in travel, almost one person in 10 in the global workforce works in tourism. Worldwide, tourism generates US$7.6 trillion. Even a relatively remote destination, Finland, is spending a billion euros to upgrade Helsinki’s airport to deal with an expected increase in passenger volume from 20 million to 30 million by 2022.

The environmental damage caused by overtourism is widely understood. Cruise ships around Europe’s coasts emitted 10 times more sulphur compounds in 2017 than all 260 million European cars did. Overtourism notes “British Columbia made entrance to provincial parks free. Not only has this meant that approximately 90 per cent of the cost of running the park is now subsidized by the government, it has resulted in issues of overcrowding due to lack of monitoring and management.”

The spread of disease through world travel is ignored by most people, but not by health-care workers. In 2015 Disneyland in southern California was the source of a measles outbreak due to tourists from the Philippines. Medical tourists go abroad to destinations like India and Mexico for cheap operations, and come home with stubbornly antibiotic-resistant infections that North American hospitals are unprepared for — including those in B.C.

As for climate, overtourism is only aggravating an already bad situation. A New York Times report in September noted a UN study that airplane emissions, after hitting 900 million metric tons in 2018, will triple by 2050. And that may be an underestimate — the report adds that new research suggests airplane emissions “may be increasing more than 1.5 times as fast as the UN estimate.”

Invoking “sustainability” in the face of such numbers is like offering “thoughts and prayers” to the victims of a mass shooting or climate disaster. Governments around the world are hungry for tourism revenues, whatever the stress to local residents or damage to the environment or harm to the climate. Suppose the Spanish and Italian governments really wanted to ease the burden on Barcelona and Venice; how many jobs would they be willing to sacrifice, from aircraft mechanics to hotel clerks and tour guides? 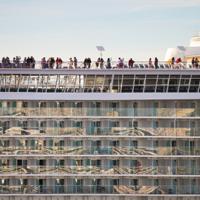 And would B.C. really want to discourage cruise ship traffic when in a single weekend such ships might bring 30,000 visitors into Vancouver? In September, YVR dealt with 2.3 million arriving and departing passengers; no provincial government in its right mind would want fewer.

Overtourism is just one of many ways we’ve sabotaged ourselves with our own economic success. Our emissions have fuelled our prosperity, giving us the freedom to visit Venice — and, through climate change, to trigger its flooding and eventual destruction.

In the same way, ticking off items on our world-travel bucket lists has helped cause climate disasters whose survivors have just one item on their bucket lists: to reach safety in Europe or North America. Whether they drown in the Mediterranean or lose their kids to Trump’s America, they have been far less responsible for the present disaster than we have.