Fortunately, I was between sips of coffee when I read Andrew Scheer’s claim to everyman status.

“I know what it’s like when families feel anxious that they won’t make it to the end of the month,” the Conservative leader told Michael Smyth of the Province. “Someone who’s never had to worry about that can’t possibly relate to it on a personal level.”

Scheer is paid $264,400 a year. He lives rent-free in a taxpayer-funded 34-room mansion with a chef, chauffeur and household manager.

He might remember his parents feeling anxious about making it to the end of the month when he was a child. They were solidly middle class — his mother a nurse, his father a unionized librarian and proofreader at the Ottawa Citizen. But they had three children, so money was likely tight at times.

But as a career politician, Scheer surely hasn’t worried about paying the bills for a long time. He had limited work experience when he was elected as an MP in 2004. He's done political staff jobs, part-time work as a server and briefly sold insurance in a friend’s agency.*

Less than two years later, Scheer was appointed assistant deputy chairman of committees of the whole and a deputy Speaker. The title has a vaguely Dwight Schrute quality, but the job brought a 10-per-cent pay increase over the base pay for an MP.

And after the Harper government was re-elected in 2011, Scheer was elected Speaker. That took his pay to $236,600 and gave him an apartment on Parliament Hill and taxpayer-paid housing in The Farm, a 5,000-square-foot residence on four acres.

Since he was elected as an MP at 25 in 2005, Scheer has collected about $3 million in salary. For the last eight years, he’s lived in housing paid for by taxpayers.

He isn’t doing anything wrong. Parliament approved the pay plan.

But it’s ridiculous for him to claim that “I know what it’s like when families feel anxious that they won’t make it to the end of the month.”

Scheer’s schtick is aimed at portraying Prime Minister Justin Trudeau as an out-of-touch child of privilege because he had a famous father and an inheritance.

But from Scheer, the approach seems goofy. He has a BA and no significant work experience except for being a politician. Yet he’s paid $264,400, an income greater than 99 per cent of Canadians.

It’s a stretch to take him seriously when he talks about knowing what it’s like not to be able to pay the bills.

Politicians’ pay and perks is a whole separate topic. They tend to argue that long hours, travel and job insecurity justify high wages and great benefits. And that the pay rate is needed to attract good candidates, especially ones already earning big money. 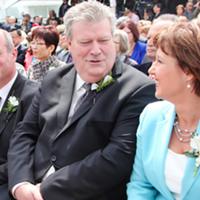 But at a certain point, the double standard rankles. Successive Canadian governments, for example, have done little to address the erosion of workplace pension plans. But MPs have a generous plan — if Scheer quit today, he’d collect an indexed pension of about $115,000 a year when he turns 55.

Even the fine print in the MPs’ pay plan is irksome. Governments have taken no action to address the decline of private sector unionization over almost four decades. (One reason fewer people have pension plans.) The result has been increased inequality and a decline in the quality of work.

But MPs’ pay is increased each year based on the average increases negotiated by large private sector unions.

You can debate the right level of pay for politicians and whether paying more would attract better candidates and result in better representation and policy decisions. (Though first you would have to define “better candidates.”)

But it is clear that federal politicians are living in a different world than the people they represent.

And Scheer’s claim to be a working-class hero is political fantasy.

*Story updated at 3:15 p.m. on Oct. 10 to correct the year Conservative Leader Andrew Scheer was elected as a member of Parliament and to clarify that he had not obtained his degree at the time.