Back in 2011, the Dai-Ichi reactor at Fukushima was a state-of-the-art facility, designed for any conceivable disaster — even in a disaster-prone country like Japan. Earthquakes? Planned for. Tsunamis? A 10-metre sea wall stood between the site and the shore.

Then the inconceivable happened: a magnitude 9.0 offshore earthquake. No one had planned for that. The tsunami arrived, 10 metres high, and the sea wall stopped it. But tsunamis come in series. When the second wave came in, much bigger, it overtopped the wall. No one had planned for that either. It knocked out the reactor’s power, and a few hours later Dai-Ichi was in full meltdown.

After the Conservative Party convention and the noisy defection of Maxime Bernier, thoughts of Fukushima come easily to mind.

The Canadian right feels itself threatened by an onslaught of migrants and refugees, “legal” and otherwise. Andrew Scheer’s Conservatives voted to end “birthright” citizenship, whereby any baby born in Canada is automatically Canadian whatever the citizenship or status of its parents. Meanwhile Bernier warned of the excesses of multiculturalism and ethnic diversity, preferring to “emphasize what unites us and the values that can guarantee social cohesion.” Unsurprisingly, White Identity supporters proclaimed “Maxime Bernier Is Our Strength, Growing Diversity Is Our Weakness.”

This anxiety has been triggered by very little: some 25,000 “irregular” mi-grants crossing from the U.S. By comparison, look at the million and a half Venezuelans now pouring into other South American countries, or the 919,00 Rohingya who now live in southern Bangladesh, or the 1.7 million Syrian refugees in Jordan and Lebanon. To those host countries, we must look like pathetic wimps.

The Conservatives, like Japanese nuclear engineers, really don’t understand what they could be dealing with in a genuine migration tsunami. Scheer and Bernier alike offer solutions as simple-minded as Trump’s border wall.

We have fussed for years about the present trickle of brown and black migrants, without thinking for a moment about what induced them to leave their homes, cultures and languages to seek shelter among northern xenophobes.

The reasons are easy to find. Their countries are cheap sources of North American consumer goods and foodstuffs, and provide cheap labour for extraction industries like mining. Even then, work is hard to find. In poor countries the police, military and gangs become predators, politics is conducted with firearms, and journalists have short life expectancies.

Climate change is only making matters worse. The Syrian catastrophe began after a prolonged drought put farmers under pressure. In Central America, drought in the “Dry Corridor” through Guatemala, El Salvador and Honduras threatens the food security of two million people. The World Health Organization regards climate change as a threat to global health, and predicts an excess of 250,000 deaths a year between 2030 and 2050 due to climatic problems.

The question, then, isn’t “Why are these annoying people coming here?” It’s “Why are the rest of these poor people staying home?”

If some recent climate projections are accurate, “staying home” will be like ignoring a wildfire mandatory evacuation. You may save your little house and a couple of hectares, but you’re more likely to be destroyed.

So the Conservatives’ and Bernier’s proverbial pearl-clutching over the multicultural menace is not only misplaced, it ignores the far greater threat that the Liberals and New Democrats and Greens are also ignoring: the impending deaths of hundreds of millions of human beings, either in their home countries or attempting to escape to safe havens like Canada — while we watch them die on streaming video, at least until it’s our turn to pack up and run.

Not the ‘new normal’

All our parties have an interest in “normalizing” the impending catastrophe. That’s why B.C. Premier John Horgan recently called our wildfire summer “the new normal,” when it’s more likely just a step up toward a megadrought and a decertified British Columbia.

Imagine Franklin Roosevelt going to Congress on the day after Pearl Harbor and advising Americans that Japanese air raids would be the “new normal” for the foreseeable future. Imagine George W. Bush standing in the ruins of the World Trade Center and telling the world that hijacked airliners and terrorism were the “new normal.” Just get used to it, folks.

Of course, Pearl Harbor and 9/11 were sudden, dramatic events, and we love drama. Climate change is drama for someone else, not for us. Yet. 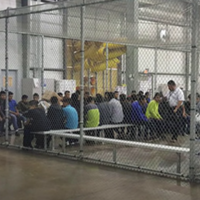 When the future is as grim as the scientists tell us, and most people would ra-ther not think about it (or think it’s a Chinese hoax), politicians have little incentive to grab voters by the collar and tell them this wildfire summer is not a drill, but just the opening shot in a war that none of us will live to see end.

Better for the Conservatives and Bernier to be like babies “making strange” at unfamiliar faces, squawking about “illegal” brown and black people and the need for “social cohesion.” Better for the Liberals and NDP and Greens to tut-tut about right-wing xenophobia than to develop serious plans to address the causes of mass migration.

Japanese nuclear engineers were a pretty successful group before 2011, and all but one of their nuclear facilities survived the earthquake and tsunami quite well. But success can breed complacency, and complacency can breed groupthink. Groupthink found it convenient not to consider a magnitude 9.0 earthquake or 15-metre tsunamis, at least for a site as attractive as Fukushima. As a result, Japan will be dealing with a radioactive mess for the rest of this century — if not indefinitely, as sea levels rise and threaten to flood Dai-Ichi for good.

Similarly, when the refugee tsunami hits us, and even xenophobic policy is a mere sand castle in its way, concepts like “birthright citizenship” and “social cohesion” and “democracy” will vanish as well.