On Sunday the Texas-based company, which emerged from the ashes of scandal-ridden Enron, abruptly announced it was suspending all “non-essential” work on the export pipeline.

Steve Kean, CEO of Kinder Morgan Inc., blamed the B.C. government for the suspension — even though the National Energy Board has not approved construction for any portion of the project but the Westridge marine terminal in Burnaby.

Even Kinder Morgan has repeatedly acknowledged the reality of setbacks in presentations to investors, citing “a potential unmitigated project delay to December 2020” as recently as last month.

Still, Kean blamed B.C. “What we have is a government that is openly in opposition and has reaffirmed that opposition very recently,” he said.

But aren’t democracies supposed to challenge projects that impose unprecedented economic and environment risks on their citizens?

Wouldn’t a tanker spill of diluted bitumen in the Salish Sea, where one-third of western Canada’s population lives, be an economic and environmental catastrophe, devastating tourism, property values and marine life?

Wouldn’t the doubling of tolls on the expanded pipeline, as approved by the National Energy Board, raise gas prices for British Columbian motorists by $100 million a year? The pipeline now supplies southern B.C. with most of its petroleum.

Won’t Alberta, by exporting diluted bitumen to Asian refineries, repeat the original Canadian sin of failing to add value to resources at home, giving up thousands of jobs and billions in revenue?

How can exporting one of the world’s most carbon intensive fuels help fight climate change?

And can’t corporations with viable projects accommodate citizens, courts, First Nations and economists who think such costs and liabilities should be properly accounted for?

But Kinder Morgan prefers bluster and blackmail instead of the reality that the project was never a sound venture because it was about privatizing gains and socializing costs.

Economist Robyn Allan has repeatedly argued that Kinder Morgan is no ordinary company and the Trans Mountain expansion project has been uneconomic since day one.

She told The Tyee that “Kinder Morgan is looking for an exit strategy, but it likely includes a need to demonize Ottawa in order to set the stage for a suit under NAFTA.”

The drama begins with the biased workings of the National Energy Board, which refused to look at downstream and upstream climate impacts of the project and even failed to scrutinize its commercial viability during public hearings.

The best evidence from experts shows that Kinder Morgan, the Canadian government and Notley have misrepresented the pipeline’s illusory benefits.

A pipeline to the coast will not raise bitumen prices, because all global markets discount junk crude due to its poor quality.

Kinder Morgan, a dirty and unsexy mover of gas and oil, began as Enron Liquids Pipeline in 1997. Enron alumni continue to populate the senior ranks of Kinder Morgan.

They include Richard Kinder, a Texas billionaire and Kinder Morgan’s chair. He worked at Enron for 16 years. Jordan Mintz, the chief tax officer, served as the vice-president of Enron’s tax division from 1996-2000.

Kean, the man now baiting Canadian governments, worked as Enron’s senior vice-president of government affairs. And so on.

These Enron alumni probably think Canadian politicians are the ultimate pushovers and dimwits.

During the 2014 NEB Trans Mountain hearings the U.S. parent firm vowed to provide 100 per cent of the debt and equity for the pipeline.

The job of raising money for the project then fell to Kinder Morgan Canada. But $1.6 billion it raised in 2017 went to pay off debts of its parent company.

Richard Kinder explained the move in a conference call with investors: “So we were able to strengthen KMI’S balance sheet using the IPO proceeds to pay down debt... ”

Kinder Morgan Canada has arranged $5.5 billion in construction facility loans from Canadian banks — but only if Kinder Morgan raises $2 billion in equity for the project.

“And now we learn from Premier Notley and Kinder Morgan CEO Steven Kean that conversations with Alberta for financial support have taken place,” says Allan.

Rachel Notley, Canada’s leading petro politician, apparently can’t wait to pour taxpayers’ money into a project that the market views as high risk and that British Columbians regard as a threat to their best interests.

“Alberta is prepared to do whatever it takes to get this pipeline built — including taking a public position in the pipeline," Notley said Sunday.

So corporate blackmail works like a charm in Canada. 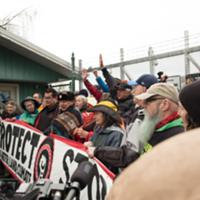 Allan says Kinder Morgan is looking for a way out.

“The project is not commercially viable and, even before it’s built, Kinder Morgan is looking for a bailout,” she said. “If Kinder Morgan’s long-term contracts for moving 700,000 barrels of bitumen and oil on a controversial pipeline were solid, would Kinder Morgan now be blaming the government of B.C. for its problems?”

In a normal world governments concerned about fiscal prudence and the public interest would let Kinder Morgan abandon a non-viable project. (Some analysts have already said cancelling the project would be a “significant blow,” but not “the end of the world for Kinder Morgan.”)

In a moral world Canadian governments would admit that pipelines and tankers export refinery jobs and greenhouse gas emissions on a disastrous scale.

In a just world Alberta would have to admit it has allowed industry to overproduce bitumen due to low royalties and bad governance. The province has no strategic plan for bitumen other than screaming for pipelines.

But Canada, like its southern neighbour, is having trouble behaving normally, morally or justly these days.

But Trudeau and Notley think it’s OK to embrace a debt-ridden U.S. company so it can export, via tankers, unrefined bitumen to Chinese refineries where the upgraded resource can enrich the authoritarian Communist party.

Canadians should be more than ashamed.

They should be alarmed.