David Vardy is one of those rare individuals who believes that when a government makes a catastrophic mistake, all citizens are responsible.

The 78-year-old former civil servant also argues “that in a democracy the true patriot is the one who dissents openly and is not silenced by fear and acceptance.”

And Vardy, the former chair of Newfoundland and Labrador’s Public Utilities Board, has been doing a lot of dissenting since 2010.

That’s when Danny Williams, in his last two weeks as Newfoundland premier, approved the massive Muskrat Falls hydroelectric project as a pathway to “clean” and “green” energy.

The complex project, now the subject of a public inquiry into its wonky economics and approval process, promised to generate electricity in Labrador and then send the power under the sea via a 1,150-kilometre transmission line to St. John’s. Another transmission line will deliver power to Nova Scotia.

At the time Williams portrayed the project as a source of cheap power, a “win-win” and a “no-brainer.”

In 2012 the federal government of Stephen Harper provided a $5-billion loan guarantee for the dam after the Newfoundland government of Kathy Dunderdale endorsed the Conservatives in the 2011 federal election. (Prime Minister Justin Trudeau’s government upped the loan to $7.9 billion.)

But Vardy, an economist with a long resume of public service, including serving as deputy minister of fisheries and clerk of the executive council in Newfoundland, warned that the venture could cripple the province. He opposes it for two simple reasons.

For starters, the Williams’ government didn’t allow the utilities board to carry out its duties and conduct a full independent assessment of the dam’s costs and benefits. Cheaper alternatives were also ignored.

“The Public Utilities Board was defanged and this project was taken away from them. We didn’t do our due diligence or integrated resource planning,” said Vardy in a wide-ranging interview.

The second reason solely had to do with the dam’s risky economics.

When the government dismissed critics and refused to revisit its decision, Vardy started to write, blog and speak out in every forum he could.

He even testified before the recent Site C Inquiry and highlighted many disturbing similarities between the two controversial projects.

Federal environmental reviews, for example, questioned the need and business case for both projects, but politicians ignored their findings.

In both provinces, Crown corporations with ties to the ruling political party were supported by charismatic premiers that strongly advocated for dams with demand forecasts that bore no relation to reality.

In addition both projects have dramatically impacted First Nations and other local residents. The two projects have also gone over budget and over schedule.

As Vardy notes, just about everything that could go wrong at Muskrat Falls did, including contractor woes and significant geotechnical issues like slumping clays at the North Spur, a one-kilometre-long land mass underlain by sands and clays that juts into the Churchill River.

And through it all, the price tag kept rising. Over an eight-year period Muskrat Falls experienced seven different cost revisions.

It was sold as a $6.2 billion project in 2010, but costs had ballooned to almost $13-billion by 2017. U.S. export markets for the electricity evaporated and now the province is stuck with a white elephant that it cannot afford. (Since 2007 the cost estimates for Site C have increased from $6 billion to $10.7 billion, with most of the major construction still to come.)

He suspects that higher rates will cut electrical demand, which means that demand for power from Muskrat Falls will collapse and hydro revenue won’t be enough to service its debt.

“The project could well end up as a stranded asset,” predicts Vardy, an asset that has become obsolete or non-operational.

“Our per capita debt in Newfoundland is higher than Puerto Rico,” adds Vardy. “Without further federal intervention I don’t see any way out of this for the province.”

Vardy now hopes that the public inquiry led by Justice Richard LeBlanc will answer some pressing questions, including the possibility of designing a new rate structure which would ensure Muskrat Falls power is used locally rather than exported at rates well below the cost of production.

For Vardy, the most important questions concern the failure of democratic institutions to offer sober second thought on projects driven by ambitious politicians.

“How do we build stronger democratic institutions and avoid the pitfalls of messianic leaders who take us down the wrong path and bypass all the due diligence that needs to take place and simply govern by the dictate of their own particular hubris and arrogance?” he recently asked The Independent, a Newfoundland and Labrador online news journal.

“I think what happened here is that democracy has been usurped.”

Part of the problem has to do with the dysfunctional nature of megaprojects themselves.

“Very few are successful and most go over budget and rarely achieve their objectives,” says Vardy citing research from Oxford University.

But they remain sexy for politicians who don’t want to pursue better or more cost-effective solutions such as demand management or what most people would recognize as simple conservation, says Vardy.

Given the flexibility and mobility of solar, wind and geothermal, governments “don’t have to go out and build big dams anymore or import turbines from China. It doesn’t do any good for the economy of Canada.”

Perhaps the largest aspect of the democratic deficit is the failure of the public service to bring proper oversight to Site C, Muskrat Falls and the Keeyask dam in Manitoba. All are over budget and have questionable markets for the electricity. 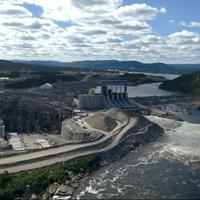 Another Dam Christmas Carol: The Ghost of Muskrat Madness

Deputy ministers and other public servants are supposed to serve the public interest, but Vardy suspects that they have become faithful servants to political parties.

As a result, the vanity megaprojects of premiers rarely receive the scrutiny and oversight they deserve.

When a public servant capitulates to such political self-interest and refuses to provide real alternatives to megaprojects, “then he or she is doing a disservice to the public,” said Vardy.

This explains why the Newfoundland Liberals didn’t challenge the economics of Muskrat Falls after ousting the Conservatives from government in 2015, he said. And why the Manitoba Progressive Conservatives continued to champion the controversial Keeyask dam after taking over from the NDP in 2016.

Vardy said it also explains why the BC NDP continued with Site C despite warnings by the regulator that better and cheaper alternatives existed.

“A new government came in and didn’t have their own team, and they become pawns of senior bureaucrats,” he said.

“My gut tells me this is what happened in B.C. with the Site C dam.”