Last month Suncor announced it was eliminating 400 bitumen-mining jobs by purchasing self-driving ore trucks. This is only the latest indignity (or “efficiency” as industry calls it) for a sector that produces more carbon and less and less employment and public revenue.

Both Prime Minister Justin Trudeau and Alberta Premier Rachel Notley are staking their political careers on the Trans Mountain pipeline and massively increased bitumen production. Why?

Bitumen royalties now make up a puny 3.5 per cent of the total Alberta budget. Last year, the oil patch shed 14 per cent of its workforce. Over the last decade 5,100 fewer people were employed by Alberta’s oil and gas sector — a trend that oil companies have assured shareholders will continue. Meanwhile Canada was just ranked 51st out of 60 countries in the 2018 Climate Change Performance Index — weighed down in large part by a certain oily elephant north of Edmonton.

If we are selling out core Canadian values like aspiring to be a global leader on climate policy, let’s at least negotiate a decent price. But as usual Canada seems to get very little for exploitation by others of our vast resource endowment.

On the campaign trail before her upset victory, Notley pledged to improve Alberta’s wretched record on capturing resource rents. The NDP platform stated “the PCs failed to earn Albertans’ full and fair value for their oil and gas by maintaining one of the world’s lowest oil royalty rate structures.”

How has that panned out? In the budget year 2013/14, Alberta collected $5.2 billion in bitumen royalties on production of 778 million barrels with a market worth of about $73 billion — a revenue capture of around seven per cent.

Two years later, Alberta collected a mere $1.5 billion on 942 million barrels of bitumen production, worth only $38 billion due to collapsed oil prices. This resource rent works out to less than four per cent return to Alberta taxpayers. Compare that to the days of former premier Peter Lougheed when Alberta captured 28 per cent of resource revenue, or even 15 per cent even in the days of Ralph Klein. Norway taxes oil company profits at close to 80 per cent.

In spite of pledging to diversify the dangerously oil-dependent Alberta economy, the Notley government has doubled down on a bitumen pipedream — running large provincial deficits and doubling the debt in the belief that future bitumen royalties will return to over $5 billion in 2019-2020. Is this realistic under such an obviously ineffective royalty system?

Beyond the Potemkin village of provincial politics and irrational expectations of many Albertans, the world is rapidly changing. The Trans Mountain pipeline is ostensibly to access Asian markets hungry for Canada’s bitumen, primarily refined into transportation fuel.

Yet China recently announced it will soon outlaw the sale and manufacture of gas and diesel vehicles. Britain and France have made similar pledges to be implemented by 2040.

China has made manufacture and adoption of electric vehicles a strategic priority with the express goal of reducing oil imports. With massive government support, China’s battery manufacturers are on track to bring online more than three times the production capacity of the rest of the world combined. According to Swiss-based investment expert Anthony Milewski, quoted in Bloomberg, “China, unabashedly, wants to be the Detroit of electric vehicles. There is no question in my mind that they are going to lead the world in capacity and, eventually, in the technology.”

Besides cauterizing the supposed market for Alberta bitumen, what does this have to do with Trans Mountain? Some analysts predict global adoption of electric vehicles could reduce oil demand by two million barrels a day by 2023, causing a global crash in the price of oil similar to 2014, except this would be permanent and accelerating.

Energy expert Tony Seba believes disruptive technologies such as ever-cheaper batteries and electric vehicles will cause global oil demand to peak at 100 million barrels per day as early as 2020 and decline to 70 million by 2030, collapsing global oil prices to around $25/barrel. He specifically dismisses the business case for Canada’s bitumen exports at the 48-minute mark in this keynote presentation, saying, “any pipelines out of Canada are basically gone.”

Rather than drinking more oil revenue Kool-Aid, Alberta should be more concerned with being saddled with massive cleanup costs when the market evaporates for the lowest-value petroleum on the planet. The Alberta government estimates that outstanding environmental liabilities now top $31 billion, yet security bonds cover only 0.5 per cent of that amount. Industry’s demonstrated desire to wash their hands of thousands of orphaned conventional oil and gas wells portends big problems if the bitumen market goes bust.

After squandering a resource bounty for decades and having virtually nothing to show for it other than public debt of $45 billion, the government of Alberta seems incredulous that British Columbians are less than enthused about dangerous diluted bitumen shipments off our coast. A spill of this toxic unstable emulsion, particularly in the confined airshed of Canada’s busiest port, would be catastrophic. 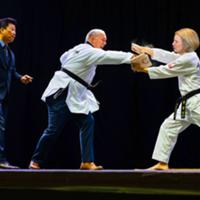 It didn’t have to be this way. Alberta extracted $500 billion more petroleum than Norway, yet this small Nordic country has so far managed to sock away more than $1 trillion USD from the resource. If Alberta’s finances weren’t in such a shambles, perhaps there wouldn’t be a panic to punch a pipeline with such a dubious business case to the B.C. coast.

Premier John Horgan is correct to put the interests of British Columbians first, as Rachel Notley purports to do with her own province.