When Premier John Horgan announced the end of tolls on Port Mann and Golden Ears bridges Friday, he was, of course, delivering on a major campaign promise.

Which is true, and fair enough as far as it goes. But it does not go far enough.

The problem is based in the policies of the previous government, which held that tolls were acceptable as long as there was a free alternative. But they had also secured votes in the Interior by cancelling the tolls on the Coquihalla, justifying the decision by saying the alternative was much slower than the toll road. There is also the Vancouver precedent of the Lions’ Gate Bridge, which was built by developers and had a toll until it was taken over by the province in 1963.

The other problem was the Public Private Partnership model used by the BC Liberals, which I have lamented here more than once. It deliberately kept the revenue risk in the public sector. Taxpayers were on the hook if traffic did not reach expectations — which was exactly the case with both the Port Mann and the Golden Ears.

In the case of the Port Mann, it also pushed the congestion on to the aging, overdue for replacement Patullo Bridge — which the province had downloaded to the Greater Vancouver Transportation Authority, along with the Knight Street and Canoe Pass bridges. Those two bridges were also long overdue for strengthening — the former due to the seismic risk, the latter to accommodate a potato distributor who thought Westham Island was a good place for a distribution centre.

In the case of the Golden Ears, money that TransLink was collecting that ought to have gone to improving transit service was diverted to the pockets of the private sector partners in the P3 to make up for lower than forecast toll revenues.

The reason that the revenue forecasts were so far out of whack is simple. When market research surveys were done people were asked if they were willing to pay tolls — having first been told that they would save time by using the new bridges. Of course respondents would say yes to a question framed that way: any other response would sound stupid.

But the reality is that people seem to be more than willing to put up with delays to avoid tolls, so they can keep the money for other needs. Which is also not stupid.

So yes, tolls are unpopular, but the way the BC Liberals used them was exceptionally unfair. Money going to investors in the Golden Ears should have been used to retain the bus pass for low income transit users and to increase both HandyDART and bus service in lower density parts of the region.

The problem we now face is that picture at the top of this article. The “truth podium” meme will now be trotted out as soon as Horgan — or someone from TransLink — dares mention road user pricing, which is not really the same thing as a bridge toll with a toll-free alternative.

Congestion pricing imposes a fee for using roads when so many people want to drive that no one gets very far, very fast. The alternatives are walking, cycling and transit — which are either free or low cost, and also much more efficient users of road space than the typical single-occupant vehicle.

And the policy is aimed at pricing that existing road space, which is so valuable at peak periods, to achieve greater efficiency, not lining the pockets of capitalist profiteers. The fact that the funds then get used to build exclusive, separated bus and bike lanes, better sidewalks and public spaces, as well as increasing transit service, is a happy but very necessary outcome.

Road pricing cuts down the attraction of driving but increases overall mobility by far more than the lost car trips. Less air pollution, noise, loss of lives and injuries are all bonuses!

One of the things that this story also illustrates nicely is that there is no Green-NDP coalition. The two partners have a very different approach.

“It’s unfortunate that the government has decided to proceed with this reckless policy,” Weaver said in a press release. “There is no question that the affordability crisis facing so many British Columbians is a significant concern. However, this policy is high cost and low impact.”

He contended the province would get a higher return on investment by investing in things like education, student housing and child care.

“Moreover, making such a massive addition to our debt risks raising interest on all debt, which ultimately prevents government from being able to invest more in important social programs,” Weaver said. 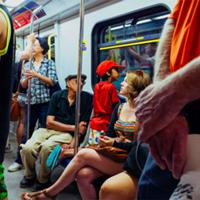 But Weaver added that tolls can help encourage drivers to find other modes of transportation, which helps to reduce congestion and pollution.

Port Coquitlam Mayor Greg Moore echoed those concerns in a tweet Friday morning, asking if eliminating tolls could “shift transit users back to their cars and thus increase commute times.”

Media reports said “road pricing is still on the table.”

But I am not so sure. Maybe now that the “need” for a referendum on new transit revenue measures has been removed, perhaps the knee-jerk response of the electorate to anti-transit catch phrases, sound bites and dog whistles will not matter as much as it did last time.

But I think the appeal of “Toll Free BC” will have much more lasting resonance with many voters than most arguments for increased transit spending.