Clark’s government — and that of her predecessor Gordon Campbell — shamefully and negligently refused to take the necessary steps to prevent out of control interface fires that have devastated or threatened B.C. communities.

They ignored key recommendations of the Firestorm 2003 review by ex-Manitoba premier Gary Filmon, refusing to take necessary steps to remove dangerous forest fuels that cause infernos.

And while environmental groups loudly proclaim the fires are caused by climate change — a conclusion that conveniently promotes their demands to eliminate fossil fuels — it doesn’t lay the blame where it actually belongs.

That would be with the BC Liberals. Over 10 years between 2006 and 2015 they spent only $8 million a year to remove fuels from just 80,000 of a total 685,000 hectares of high-risk forest land that urgently needs action. And another one million hectares also require treatment to prevent fires.

At the same time, it cost the B.C. government an average $182 million every year to fight forest fires — more than $1.8 billion in total.

And this summer so far the province has spent $100 million to pay some of the unexpected expenses of thousands of evacuated residents and $204 million to fight the fires.

And the consequences of BC Liberal neglect are tragic. Choking smoke blanketing B.C. and beyond for weeks; Williams Lake’s 11,000 citizens evacuated; homes and businesses destroyed; livestock killed; tourism devastated; and more.

Fortunately, New Democrat Premier John Horgan last week promised to implement the Filmon review that Clark and Campbell mostly ignored. It will “be the foundation for what we do after we get people back to their homes after the fires are out and we start to take stock of what the consequences have been from this season’s fires,” Horgan said.

But the BC Liberals didn’t just ignore Filmon’s review; they also didn’t act quickly on a 2015 report from the independent BC Forest Practices Board that pointed out the pathetic progress the province had made in dealing with the build up of dangerous forest fuels.

“Information available from government indicates that about 11 per cent of high-risk forests have been treated, or roughly one per cent per year since 2004. However, due to the quality and accuracy of available records, the percentage treated is likely significantly lower. Meanwhile, fuel treatments require maintenance over time as vegetation grows back, and it is likely that older, previously treated areas require retreatment,” the report said.

“Given the enormity of the problem and the small area treated each year, progress has been slow.

“While the cost of fuel management may seem expensive, research has shown that, in general, hazard mitigation investments cost less than wildfires when all direct, indirect and additional costs of wildfire are tallied.

“Money spent on mitigation through an effective interface fuel management program should reduce social, economic and environmental impacts to communities. Some of these impacts include smoke-caused health issues, disruption to the tourism industry, property loss, and damage to watersheds, among many others.”

The Forest Practices Board’s 2015 report was a follow up on its similar 2009 investigation.

So why did the BC Liberals ignore all the evidence that clearly proves prevention is cheaper than firefighting?

Most likely because Clark and Campbell were more interested in balancing budgets each year and unwilling to spend on prevention efforts that would bring future savings. It was easier to hope firefighting costs — which vary widely from just $53.5 million in 2011 to a massive $382 million in 2009 — would be low.

No one can argue with spending whatever amount is needed to put out terrible fires once they occur — but prevention doesn’t create daily news when it’s cut.

“Almost as soon as the Campbell government was elected, it began planning deep cuts to fire prevention and firefighting budgets.

And as I wrote in 2004 in The Georgia Straight, it proposed to make the cuts even though the province’s director of forest protection warned in 2001 that a planned 35 per cent reduction to his budget would result in disastrous fires hitting communities and costs of hundreds of millions of dollars. The director predicted a 33 per cent increase in preventable human-caused fires and a 313 per cent jump in area burned if the cuts went ahead.

The government eventually went ahead with cuts to its funding for fire prevention, but replaced the money with a levy on forest companies. The budget remained frozen.

“But despite the devastating fires of 2003 in Kelowna, Barriere, and elsewhere that cost British Columbia $375 million in firefighting expenses, and despite advice in the confidential memo that fire prevention would dramatically reduce those costs, the B.C. government has refused to increase the fire-preparedness budget and has still cut $30 million from the direct firefighting budget,” I wrote then.

And neither Campbell nor Clark ever made the serious investment in prevention needed to stop situations like today’s wildfires.

That was clear when then-NDP forest critic Harry Bains questioned then-forests minister Steve Thomson on March 3, 2016, in the B.C. Legislature.

H. Bains: So 80,000 out of 685,000, and we are talking about since 2004. You’re looking at 12 years to treat eight per cent — rough and dirty — of what was considered to be high risk by the Filmon report. When you compare that to Alberta, with their big fire at Slave Lake, they committed $1 billion over 10 years. They committed that. We are going year by year, and 12 years later, we’re still sitting at eight per cent. If you go at this rate, you’re looking at 100 years to fix this. I mean, that’s the reality. 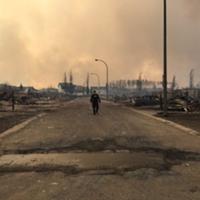 And so once again, just a year later, the province is in flames and the necessary work needed to avoid disasters is still not done.

Is climate change a factor? Of course.

But climate change has been a concern since before the 2003 Kelowna firestorm, and wasn’t a factor in B.C.’s worst fire season in 1958, when 8,560 square kilometres of forest were destroyed. This year is B.C.’s second worst with 6,510 square kilometres burned so far — but records only go back to 1950.

Regardless, it’s clear that the one thing the BC Liberals had control over was the budget for fire prevention — and they fiddled while our forests burned.