As a frequent bike user of the Arbutus Corridor since it was asphalted in 2016, I hope its designers stay focused on its current use as a walking and cycling track and avoid the calls to convert it to a park or “greenway.”

The City of Vancouver is seeking public input on the future of the corridor, which it bought in 2016.

The corridor is a sophisticated historic piece of graded transportation infrastructure built in 1901 to carry freight and passengers from Vancouver’s commercial centre to the northern arm of the Fraser River. Canadian Pacific Railway had owned the land since 1886 and leased the line to British Columbia Electric Railway for streetcar service until the late 1950s.

The city is committed to maintaining the nine-kilometre corridor for future transit, a vision included in its 2040 city transportation plan.

The Arbutus Corridor has been likened to the High Line in New York City, a reminder of our past train transportation history.

But it should not be confused with the High Line or put on the same pedestal as it gets a “design overhaul.”

It’s not just that the urban setting and scale of this part of Vancouver, which is predominantly single-family housing, is different. The Arbutus Corridor isn’t elevated and isn’t in Manhattan, where every inch of space in the vertical and horizontal plane is used multiple times to make the city function. The High Line is a sophisticated and heavily frequented park and an engineered living roof; the Arbutus Corridor is not and shouldn’t be.

The corridor also should not become a greenway, a word overused in the design world.

What it is, and should be, in a nutshell, is a walking and biking trail that remembers the rails of the past and the corridor’s role in moving freight and people. The design for its future should focus on that.

It should stay paved (preferably drainable asphalt) so it can be used by wheelchairs as well. It could then act as a bike Autobahn or “bike superhighway” as currently created in Berlin. Vancouver does not have one long, safe cycling stretch protected from vehicles by wide vegetation strips and not continuously interrupted by road crossings.

The corridor is wide enough to accommodate local plants and allow a low-maintenance design that works with natural processes, for example including areas to collect stormwater in shallow swales.

It should be a low-key design based on its role as a pathway connecting the city with the suburb. The design should focus on safety at the road crossings and appropriate safety details and their appearance. There could be an Arbutus Corridor bench and litter bin design for example, to provide a consistent design language. The safe separation of bike and foot traffic needs to be refined, perhaps with different asphalt colours, clear signage and physical barriers at danger points.

The current low-key elegance in the corridor design lies in the respect for the existing engineered grading and integration of the corridor into the surrounding topography. The path winds so elegantly at a very light curve and gradient/slope from the commercial area of Vancouver up the hill to Kerrisdale that one can barely notice it as cyclist, while enjoying the continuously changing views towards the bay at every time of day and season — an amazing experience! The corridor is one of the only bike experiences with a comfortable elevation change, a relic of the railway engineering, which does not feel like a workout.

This bike road is for commuters and weekend joyriders, not the serious dry season, high speed, aerodynamic bike-pants bikers. The corridor is a space for everyone, on wheels or foot.

Why I am writing this? I am concerned that the Arbutus Corridor is being romanticized into an overdesigned “green” vegetated corridor, a so-called cover-it-all project where road engineers, landscape architects and urban designers are going to miss the mark because they are transfixed by the value of the land and the desire to build a design icon.

I want to avoid this and think pragmatically about the corridor design, developing a kind of iconic strategy based on doing less. I am also writing this as the designs are being drawn on paper and not yet carved in stone.

The corridor is public land and should be made available for the public in a useful and appropriate way. It’s unique and has a historic “public” transportation railway past. It could be that the city will integrate a tramline in the corridor, as suggested in the 2040 transportation plan, and a low-key flexible design will allow this.

Stefano Boeri Architects is currently designing linear parkways on Milan’s unused train tracks, which surround the inner city. The project, called A Green River for Milan, is focusing solely on creating parks and gardens for communal use. 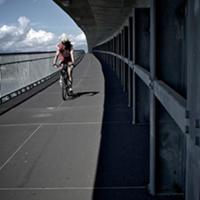 Vancouver Cycling Is Improving, but What about Its Neighbours?

But Vancouver is not New York City or Milan, and the Arbutus Corridor is not downtown. The corridor leads to and from the city, and an overexcited or overenthusiastic design should be avoided. The urban scale along it is mainly single-family housing, and even with densification strategies that is unlikely to change in the foreseeable future.

Other activities like resting and viewing could be subtly integrated along the pathway without obstructing its major goal of people movement. Installations like well-established community gardens should also be encouraged. But they should not obstruct the flow of cyclists and walkers or reduce the unique free flow experience of the corridor. Access to the gardens needs to be from side streets along the corridor, not the pathway. Plants should be local and plantings designed in such a way that they enhance the corridor, for example creating through different plan heights a rhythm of planning representing a tree alee feeling if you like, like the rhythm of the existing telegraph poles already aligning the pathway.

Finally, a word on the environmental impact. Sure the corridor is paved, but drainage can be managed easily along its edges. Much more important in this case is what I call “social sustainability;” it’s a multiple use space for the public and continues to be a transportation corridor, a people mover, and this should be the priority when designing it.

Vancouver is surrounded by nature, but it does not have enough continuous linear space in the city to walk and cycle. That is what makes the Arbutus Corridor so unique to this city and the world.

It is therefore extremely important that the designers experience this corridor by riding and walking it through all the seasons before finalized planning commences.

The Arbutus Corridor offers the chance for road engineers, landscape architects and industrial designers to create a unique people space that relates to the surrounding context and what Vancouver stands for as an open and freely accessible city.

The Arbutus Corridor would be a good addition to the Seawall as another international pathway icon in Vancouver.