Although the prime minister claimed that his decision was “based on rigorous debate on science and on evidence,” the approval remains, say economic and petroleum experts, an irrational political decision that sacrifices the best economic and environment interests of the country.

Let’s begin with the insult to democracy.

From the beginning, countless citizens identified the National Energy Board review process that approved the controversial $6.8-billion pipeline earlier this year as a travesty, unjust or a sham.

Robyn Allan, a former senior economist for the B.C. Central Credit Union, charged in a recent letter to the Trudeau government that a biased regulator “designed the scope of its review so narrowly, restricted participation so profoundly, and removed essential features of quasi-judicial inquiry — such as cross examination — so completely,” that it pre-determined an outcome that favoured Kinder Morgan.

Mayors such Burnaby’s Derek Corrigan disparaged the impartiality of the process, and Marc Eliesen, former CEO of BC Hydro, withdrew as a participant because he “came to the discouraging conclusion that the Board was on a predetermined course of action to recommend approval of the Project.”

The NEB, for example, excluded full impacts on climate change such as offshore emissions and upstream emissions; failed to examine the full impact of diluted bitumen spills on B.C.’s coast; failed to assess the full economic need for the project; restricted the narrow review to “applied capacity” (540,000 barrels a day as opposed to “designed capacity” of 780,000 barrels); and failed to access the full costs and benefits of the project in a volatile global oil market. And on it went.

During the election campaign in August 2015, Trudeau promised to “overhaul” the NEB and redo the flawed approval process for Kinder Morgan. But he lied.

His cabinet has now approved an unneeded pipeline that was rubber-stamped by a captured regulator using a flawed process based on limited or inaccurate information.

The Trudeau government didn’t even have the courtesy to answer six critical questions on missing information about the project posed by his own ministerial review.

In so doing, Trudeau has out-trumped Stephen Harper.

“It is a huge betrayal to not keep your promises and then make a decision based on bad information designed solely to approve a pipeline project,” said Allan. “Democracy is the first casualty here.”

But economics is also a formidable casualty.

Trudeau and his cabinet claim that Canada needs different markets for its oil, and that Asian markets are clamoring for our heavy sour crude. But they are not.

Canada’s heavy crude contains more sulphur, acid and heavy metals than most other crudes imported by China. Chinese refineries have not been modified to accept what amounts to one of the world’s dirtiest refinery feedstocks.

Unlike China, U.S. Gulf Coast refineries have retooled to handle Canada’s heavy oil, and they still represent the largest concentration of refineries in the world able to process bitumen.

“Contrary to industry claims, overseas markets in Europe and Asia, which could be accessed through new pipelines to the Atlantic and Pacific coasts, typically pay less for bitumen and heavy oil than the U.S. Gulf Coast, home to the world’s largest heavy oil refinery hub,” recently noted Jeff Rubin, former chief economist for CIBC in a paper for the Centre for International Governance Innovation.

But that’s not all. The Trudeau government has also failed to acknowledge that the world is suffering from an oil glut partly created by overproduction from Canada’s bitumen mines and fracked oil from North Dakota and Texas.

How can Kinder Morgan dump 540,000 barrels of diluted bitumen in Pacific markets and not have any impact on global oil prices, when OPEC is trying to negotiate a production cut of around 1.2 million barrels to rescue oil prices from the doldrums, ask economists like Jeff Rubin and Allan.

And what happens to already grim oil prices when you add the capacity of Line 3 and Keystone XL (President-elect Donald Trump vows to approve it) to pour another one million barrels of raw bitumen into the marketplace?

Next comes the mythical economic windfall of getting bitumen to tidewater ports. According to the government and Alberta officials, the price of bitumen will somehow shine like gold once it hits an ocean terminal.

But David Hughes, one of the country’s top energy analysts, says that’s nonsense and so, too, does the Parliamentary Budget Officer.

Bitumen sells for less (anywhere between $10 and $15) than conventional oil because it is an inferior heavy product that requires more processing and refining, as well as extensive dilution with imported condensate for transport. Bitumen’s appalling quality ensures its low price will never disappear.

“The price differential is a fact of life given the location of the resource and its inferior quality, and will occur if the oil is sold to U.S., European or Asian refineries,” explained Hughes.

“There is absolutely no reason for the Alberta and Canadian governments to assume a price premium for [Western Canadian Select] will result from ‘tidewater’ access. If anything, ‘tidewater’ access will command a further discount from what can be obtained using existing pipelines and markets.” But more pipelines, argued Trudeau, will allow Canada “to make progress, to leave a cleaner more prosperous country to our kids than the one we inherited from our parents.”

How can indebted Alberta ever do that when pipelines drain the province of its wealth and opportunity, due to its appalling low bitumen royalties?

Cenovus, for example, paid only $3 million in royalties on sales worth $1.2 billion in the first six months of 2016. That's a quarter of a per cent.

And what about climate change, the great carbon-fuelled disruption that threatens to unsettle all life on the planet?

But Alberta’s cap means, in reality, that the rest of the economy will have to shoulder an unfair portion of the pain and contraction in order to meet the already low standards set by the Paris Agreement.

Under that faltering agreement, Trudeau has committed the country to reducing emissions by 30 per cent to reach a target of 524 megatonnes (MT) of carbon dioxide per year in 2030.

But under Alberta’s cap, which actually allows carbon emissions from the megaprojects to grow by 40 per cent, the tar sands will expand to represent nearly 20 per cent of the nation’s GHGs by 2030.

While the tar sands get to pollute more of the atmosphere, all other sectors of the economy will need to severely contract, says Hughes.

“In order to have a realistic chance of success, a rational plan to meet Canada’s climate commitments should include commensurate emissions reductions in the oil and gas sector” and not permit increases as guaranteed by Alberta’s climate plan and the recent approval of the liquefied natural gas export facility in B.C., he added.

Announcing the decision, Trudeau repeatedly claimed that pipelines for diluted bitumen are much safer than rail cars and that “we need to increase pipeline capacity in order to prevent oil from traveling by rail across our country.” But neither statement is true.

Two documented pipeline spills of diluted bitumen in North America — one in Michigan and one in Arkansas — resulted in catastrophic economic and environmental costs because the product does not behave like conventional oil.

Furthermore, the U.S. National Academies of Science, Engineering and Medicine has documented that diluted bitumen is almost impossible to clean up in aquatic environments and that regulators and clean-agencies “do not take the unique properties of diluted bitumen into account, nor do they encourage effective planning for spills of diluted bitumen.”

In contrast, bitumen travelling by rail does not have to be diluted, and does not really spill. Nor can it catch fire. The only oil that can catch fire is fracked light oil from North Dakota or condensate used to dilute bitumen.

As both Hughes and Allan noted in interviews with The Tyee, shipping undiluted bitumen by rail represents a safety improvement over pipelines in the event of an accident, because raw bitumen simply does not flow the same way diluted bitumen does. Yet industry prefers pipelines because they cost less in the short term and remain as poorly regulated as rail.

Perhaps the last issue that needs addressing is that of pipeline capacity or need. Government and industry say Canada just needs more of them.

In a forthcoming analysis, Hughes reviewed the capacity of current pipelines and rail to move bitumen and found that “there is sufficient pipeline and rail capacity to export NEB’s forecast increases in Western Canadian oil production.” He saw no production restraints based on pipeline capacity until 2021.

One federal government memo even calculated that no more pipelines would be needed till 2025 — at which point climate change and volatile oil prices could make the whole matter moot. 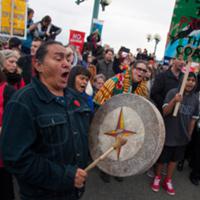 But one big reason the oil industry is pushing for greater pipeline capacity has to do with the rotten condition of so many aging and existing pipelines.

More added capacity in the system, then, serves as insurance against Kalamazoo-like disasters (which cost the industry $1 billion in cleanup and created costly pipeline bottlenecks) or regulatory orders imposed on negligent companies to limit pressure on their unsafe pipelines.

Additional capacity allows the industry to make mistakes and escape the economic consequences by shipping on another line.

In the end, the Kinder Morgan decision boils down to the worst of the worst: a bad day for the economy and the environment and the public interest, concluded Allan.

“It’s a political decision to appease the interest of a small sector of the population.”

And that’s the appalling truth.