The BC Liberals’ latest Climate Leadership Plan marks the end of the government’s commitment to any serious effort to reduce greenhouse gas emissions.

The 52-page document has a classically Orwellian name.

There is no “leadership” — Premier Christy Clark rejects that role for B.C., saying the province has to wait and see what happens in other jurisdictions.

And there is no “plan,” just lots of photos, paragraphs and words that set out shiny, vague hopes for the distant future.

Climate change mattered to the government for a few years. In 2007, then-premier Gordon Campbell got religious on global warming after treating the issue as irrelevant for six years. He had read some enlightening books, he said in explaining his conversion, and was shocked by China’s sprawling, polluted cities on a 2006 trade visit. (Campbell had also noticed that California governor Arnold Schwarzenegger rode the issue to a big election victory. Schwarzegger’s chief environmental advisor Terry Tamminen was quietly brought in to help the Liberals develop their plan.)

Campbell, who had opposed ratification of the Kyoto accord on climate change a few years earlier, said the battle against climate change was as important to the planet’s future as the last two world wars.

An action plan — starting with a carbon tax — was created to achieve the goals.

The government met the 2012 commitment, helped by the 2008 global recession.

By the province’s count, emissions fell from 64.3 megatonnes to 60.5 megatonnes (including one megatonne in forestry offsets) — 5.9 per cent, close enough to claim success. (Though hardly a grand achievement — Canadian emissions declined 5.3 per cent in the same period without a carbon tax or climate plan.)

But the government has no chance of coming close to meeting this year’s target, which called for carbon emissions of 52.7 megatonnes. Statistics Canada reported B.C.’s 2014 emissions at 62.9 megatonnes — up from 2012.

Which in turn means the government has no chance of meeting its 2020 commitment to cut emissions to 43.1 megatonnes. That’s a big failure, as the reduction is required under the Liberals’ own legislation.

A government serious about leading in the effort to slow global warming would produce a credible new plan to meet the objectives.

But Clark, at a slickly staged, expensive and empty announcement in a warehouse, took a different approach. She abandoned the targets and bailed on the climate issue.

The new Climate Leadership Plan pretends the 2016 and 2020 commitments don’t exist. It focuses on 2050, but offers no plan to meet that target.

The original plan set out a four-step path to achieving the 2050 goal. Between 2007 and 2012, greenhouse gas emissions were be reduced by 0.8 megatonnes per year. Between 2012 and 2016, the emissions were to be reduced by 1.9 megatonnes per year, and between 2016 and 2020, 2.4 megatonnes a year. Hitting those targets, and achieving a one-megatonne per year reduction over the following three decades, would result in achieving the 2050 goal.

But the government’s failures have made that impossible. Emissions for 2016, when they are tallied in two years, will be about 60 megatonnes. Achieving the legislated target for 2020 would require cuts of more than four megatonnes a year for the next four years. Which can’t be done.

Clark could have reworked the plan and set new objectives. She suggested that was the goal in April 2015 when she announced a “Climate Leadership Team” with a mandate that included setting out “new programs and policies required to achieve British Columbia’s greenhouse gas reduction targets.”

The team’s report had specific recommendations, including increases in the carbon tax to be offset by a reduction on the sales tax from seven to six per cent. It warned that with current government policies, emissions are on track to reach almost 70 megatonnes by 2050, more than five times the level allowed under the goverment’s climate plan.

After pondering the report for almost 10 months, the government responded with its Climate Leadership Plan that gives up on any serious efforts to fulfill its commitments.

The panel’s recommendations were ignored, and the original 2007 objectives abandoned. The government’s report sets out vague intentions to reduce emissions by 25 megatonnes by 2050.

The panel projects 2050 emissions, based on current government policies, at about 70 megatonnes. The new reductions proposed by Clark’s government would leave emissions at 45 megatonnes — 350 per cent above the government’s legislated commitment.

And even the few measures announced in the plan are dubious.

About half of the government’s “reductions” are to come from the forest sector, mostly from planting and managing trees, which store carbon dioxide. But, as Natural Resources Canada notes, this form of carbon capture is inherently unpredicable. A bad fire season or return of a pest like the mountain pine beetle, both more likely as the climate warms, can release all that stored carbon. 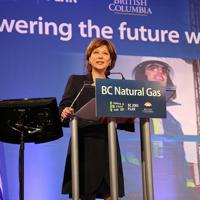 The $3-billion-plus Massey Tunnel replacement, the plan says, will help by reducing idling — even though it will also encourage commutes in private vehicles.

Clark has been distancing herself from the the climate issue since she became premier. The carbon tax was introduced at $10 per tonne of emissions in 2008 and increased by $5 a year until it reached its current $30 level in 2012. Clark ruled out further increases, saying B.C. wouldn’t do more until other jurdisdictions introduced similar measures.

Which might be prudent, especially as the federal Liberal government appears committed to a carbon tax or similar mechanism to encourage transition to low-emission options.

But it’s not leadership. It’s waiting to see what happens and then following the pack.

Abandoning the climate change commitment is a defensible choice for a government, especially one that aims to fight next May’s election on jobs and the economy.

But it’s dishonest — and insulting to voters — to try to hide that decision behind a phoney plan and empty promises.