On Wednesday Canada lost a mighty herald of the nation’s better angels. Mel Hurtig was a huge fan of Canada, a nationalist in the best sense. That is what made him such an incisive critic of leaders who sold short Canada’s potential – the potential to be a land of opportunity for all, and a beacon of tolerance and fair-mindedness to the rest of the world.

Hurtig could make such a dream seem practical because, in various ways, he lived it. Born of Jewish immigrants, he became a highly successful bookseller, publisher and author, and even sought to lead the country as head of a short-lived experiment aptly named The National Party.

At the high-rolling expense of millions of dollars, coordinating 2,500 creative contributors, he published The Canadian Encyclopedia in 1985. This was before the internet and so weaving a three-volume, information-rich narrative of Canada might be seen as the ultimate gesture of defiance against the U.S. cultural juggernaut. The Canadian Encyclopedia, lives on, by the way, on the internet.

Mel Hurtig helped found the Council of Canadians, a non-profit group dedicated to fighting for social and environmental justice. As national chairperson Maude Barlow said yesterday on the COC website: “Mel Hurtig loved this country more than anyone I ever met.”

The Betrayal of Canada (in which he lambastes the NAFTA trade treaty with the U.S.; 1991).

At Twilight in the Country: Memoirs of a Canadian Nationalist (Autobiographical; 1996).

Rushing to Armageddon (on the perils posed by the U.S. missile defence system and Canada’s participation; 2004).

The Truth about Canada (on how Canada measures up in social and economic indicators against other OECD nations; 2008). 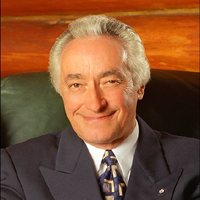 ‘It would have been incredibly hypocritical’

As a nationalist who’d invested his faith and energies in building up Canada’s ability to tell its own stories, Hurtig was heartbroken to watch a string of Canadian publishing houses subsumed into global corporations headquartered in other nations.

So disturbed, in fact, that when the top level Canadian publisher for his last book was bought up by a U.S firm, he turned his back on the five-figure advance he’d been promised and self-published. The book, a scathing take-down of Stephen Harper and his record, Hurtig titled The Arrogant Autocrat. In 2015 it became a bestseller, topping 25,000 copies. As Hurtig told The Tyee at the time: “I, for years, led the battle against the takeover of the Canadian publishing industry by foreign interests. It would have been incredibly hypocritical for me to have my book published by an American conglomerate.”

The Tyee was privileged to excerpt The Arrogant Autocrat, one of many nice ways Mel Hurtig showed his support for this publication. He became an original member of the Tyee “Builders” – people who contribute to help The Tyee grow -- gifting a number of signed books to help the site fundraise.

So Canada was extremely fortunate to have Mel Hurtig, for 84 years, a citizen in its midst. And I happened to be particularly fortunate to have Mel in my neighbourhood. He moved from Edmonton to Vancouver 11 years ago to be near his beloved daughters, and eventually settled along Main Street, not far from my home. He brought his dog with him for dinner once or twice, and we’d see each other out and about, including, on occasion, at the local barber shop, where the dapper Mel, with his resplendent head of silver hair and winning ways, was a celebrity. I was just another balding patron, but the barbers gave me a bit more notice the minute they learned that I knew Mel.

Mel was charmingly kind to my children, and burstingly proud of his own. He was a populist who liked to put on a coat and invite friends who didn’t know each other to his golf club for dinner in hopes of orchestrating a lively discussion.

He was a Pierre Trudeau Liberal who waged hell on Chretien and Martin Liberals who didn’t, in his opinion, show enough heart for vulnerable Canadians while making Canadians too vulnerable to foreign interests.

One newspaper journalist, writing a goodbye to Hurtig yesterday, said she found “quaint” his economic nationalism, his persistently expressed fears that ill-conceived trade deals were selling out Canadian sovereignty. My feeling is that Mel Hurtig’s views are proving to be the opposite of quaint – rather they are increasingly vindicated as being prophetic.

Did I say Mel Hurtig was a huge fan of Canada? He was, as well, a huge fan of the Canadians, Vancouver’s single-A minor league baseball team. Their band-box stadium is another place I had the pleasure of running into Mel. He seemed always to have the best seats, ensconced with invited friends in the front few rows right near home plate – as close to the action as he could get, and well-placed to hold accountable the umpire’s decisions.

Mel was one of the most sociable guys I’ve ever met. And in that ballpark full of Canadians cheering for a team called the Canadians, he was perfectly in his element.