The war of words in northwest B.C. over Pacific NorthWest LNG's proposed megaproject at the mouth of the Skeena River has escalated dramatically, with a Lax Kw'alaams hereditary chief claiming he has been defamed by members of his community -- and by a local Prince Rupert newspaper. 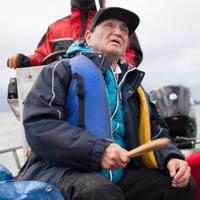 At Northern Salmon Summit, a Declaration: Cancel LNG or Else

The defamation claim, by a leading opponent of plans to pipe fracked gas to Lelu Island for processing and export to Asia, highlights a deepening schism between a besieged band council that in March came out in favour of the project, and hereditary leaders and other community members who have vowed to stop the project in its tracks. The Lax Kw'alaams had in 2015 voted against the project, despite an offer of a $1.2-billion benefits package, and this March's sudden decision to support the project -- just eight days after the band reiterated its opposition -- is seen by many in the community as an unauthorized flip-flop by the band council.

The $36-billion project -- an 800-kilometre pipeline from northeast B.C. to tidewater, a massive gas hub on Lelu Island, and a shipping terminus atop some of the most sensitive salmon habitat in the country -- is a key plank in Premier Christy Clark's energy investment and job creation agenda for the 2017 election. The province has been pressing Ottawa, and the local community, to greenlight the project. The premier has lauded First Nations who support her LNG plans, while decrying opponents as being anti-development.

Donnie Wesley, Simoyget (hereditary chief) Yahaan, a leading figure of what the premier earlier this year called the "forces of no" because of his opposition to the potential destruction of Lelu Island, claims he has been defamed by fellow Lax Kw'alaams members, who released a statement last month saying Wesley had no authority to call himself a chief, had no rights to the name Yahaan, had disrespected the ayaawx (or traditional Tsimshian law), and that he has been illegally occupying Lelu Island. (Wesley and his supporters have maintained an occupation camp on Lelu Island since August last year.)

Earlier this month, Wesley's legal counsel, Vancouver-lawyer Christopher Dafoe, served papers on all 11 signatories to that statement, who described themselves as "Ts'msyen hereditary chiefs, matrons, elders and hereditary leaders of the Nine Tribes of Lax Kw'alaams." On May 17, a Prince Rupert newspaper, the Northern View, printed what it called the group's "unanimous demand" that "illegal protestors on Lelu Island stop their occupation immediately." Some of the allegations were repeated in another story the paper printed on June 8. Other media have picked up on the statement, with The Globe and Mail writing as recently as Monday that "the Nine Tribes of Lax Kw'alaams declared its official support last month for Pacific NorthWest LNG." (emphasis added)

All of this feeds uncritically into Clark's contention that Lax Kw'alaams people support the project. The reality is that they, as in many other communities in the Skeena -- native and non-native people alike -- are deeply divided. (Full disclosure: I have done contract work for SkeenaWild Conservation Trust, which opposes siting an LNG facility on Lelu Island, but is not opposed to development in the Skeena per se; see this article.)

As to whether the "Nine Tribes" is in any position to express its "official support" for anything is a material question. Dafoe, Wesley's counsel, claims there is no such entity as the Nine Tribes of Lax Kw'alaams. There are said to be nine actual Lax Kw'alaams tribes, and at times they have been represented under the banner of the Nine Allied Tribes of Lax Kw'alaams, but this latest group may have no official standing. Wesley, through his counsel, has demanded that the signatories to the "Nine Tribes" statement retract their allegations against him, and apologize.

Wesley demanded that the Northern View also admit that it erred in publishing the group's claims. On Tuesday, after 10 days of defending its "editorial judgment" to run the original statement without getting Wesley's side of the story, the paper relented and published an extensive "clarification." In it, publisher Todd Hamilton said, "The Northern View has not been able to independently verify either the claims of the signatories to the letter from the Nine Tribes of Lax Kw'alaams, or of Mr. Wesley. However, we regret not obtaining Mr. Wesley's comments before publishing the story." He admitted that his newspaper "published a story based solely on the material contained in the letter and the press release" sent to it by the self-identified "Nine Tribes."

In an exchange of letters and emails between Dafoe and Hamilton that began on June 10, Hamilton said he had documented the paper's attempts to reach Wesley before the original story on May 17, but "unfortunately, your client, Donald Wesley, has not made public a telephone number, an email address or any other contact information that that I can discover or that can be discovered by our reporters (past or present)."

The day before the first story was published, Hamilton wrote, "I myself personally attempted to reach Donald Wesley through Facebook in the following terms: 'Todd Hamilton from the Northern View here. I was hoping to do an interview with you to respond to the hereditary chiefs release' [sic] ... I do not believe Donald Wesley has ever responded to that request."

I reached Wesley at his home in Port Simpson this week after resorting to a rather tried and true journalistic tool -- I called 411, directory assistance, and they gave me his listed number. Wesley told me he never saw Hamilton's Facebook message. In a subsequent letter to Hamilton, Wesley's counsel pointed out that he, too, had found Wesley's number in the directory. Hamilton then repeated his claim that Wesley was not contactable, but Tuesday finally expressed regret that Wesley's views had not been obtained in advance. The correspondence between Wesley's counsel and Hamilton, publisher of the Northern View, was shared with this writer by Donnie Wesley. So too were family photographs clearly showing Wesley being installed as a chief.

In one letter to Wesley's counsel, Hamilton perhaps unwittingly gave credence to the notion that it is vital that media be diligent in their reporting of an issue which, in Hamilton's words, commands "national attention." He wrote, "Rightly or wrongly, in the present circumstances, with national attention to the liquefied natural gas terminal proposal respecting Lelu Island, it was our judgment to publish as we have" -- a decision Hamilton now publicly regrets.

And yet, having printed its clarification, the Northern View's website still had live links to the original story and the "chiefs" letter as of this writing Wednesday, albeit with links to the clarification. When this writer contacted Hamilton Tuesday to ask questions about his paper's journalistic standards and the clarification he had posted mere hours earlier, and having clearly identified myself, Hamilton immediately asked, "Is this conversation being recorded, Ian?" I answered no, but that I was taking notes. "At this point I have no comment," Hamilton said. "None whatsoever, thank you." He hung up, but called back moments later, identified himself, and said, "You are being recorded, okay? And this conversation is off the record." After a confusing exchange in which I declined to engage in an off-the-record conversation, Hamilton terminated the call.

All eyes on Trudeau gov't 'due diligence'

There remains the question of whether the signatories to the original letter and press release will retract their statements and/or apologize to Donnie Wesley. I managed to reach four of the 11 signatories by telephone -- Arnold Brooks, Randy Dudoward, Jack White and Alex Campbell. Brooks told me he was "too old" to understand my question as to whether he would apologize to Wesley. Dudoward said he would make no comment at this time. White said, "I can't speak at this time, I have to get some legal advice." Campbell said, "We do have our own legal speaker and I don't want to overrule anybody here." Meantime, Discourse Media (with which I am also affiliated) yesterday published an extensive investigation into the claims and counter-claims in Lax Kw'alaams about just how much support PNW LNG, and by extension Christy Clark's LNG agenda, has in the community.

Clark has demonstrated a single-minded disregard for any viewpoints that don't square with her own, even as her LNG pipe dream lies in ruins. She claims a level of support that is not supported by the facts, but in Clark's B.C., the facts never get in the way of a bad project.

But it is the federal government that now holds the pen on whether or not to let Petronas, the state-owed Malaysian oil company that is the key investor in PNW LNG, build its project on Lelu Island. If the Discourse Media investigation isn't proof negative of the corrosive, divisive, opaque and utterly bankrupt nature of how resource development gets done in Canada's so-called Reconciliation age, I don't know what else is.

Yet on Monday, when six federal cabinet ministers announced a wholesale review of the rules for approving major resource projects, they stuck to the Trudeau government's line that pipeline proposals already in process when the Liberals were elected will not be sent back to the drawing board, but will be reviewed according to the rules set by the Harper regime. This is a confounding decision, because part of the reason Trudeau & Co got elected in the first place is because Harper's major project review process was -- and remains -- rotten to the core.

At the very least, Trudeau's Liberals need to do due diligence -- real due diligence -- regarding Clark's claims to have First Nations on side for Petronas. Nor is this just a numbers game about how many chiefs (or Indians for that matter) have signed this petition, or that one, freely or under duress. Nothing that has been done to date in the Skeena comes close to meeting a United Nations standard of "free, prior and informed consent," and Ottawa should not be duped by a premier whose ability to discern fact from fiction probably wouldn't qualify her for an unpaid internship at the Northern View.

Meantime, the Lax Kw'alaams First Nation had been planning to hold a "members only" information sessions on the PNW LNG project, requiring proof of band membership for entry.

It wasn't made clear who would speak at those sessions or whether opponents of the project would be invited to present at them.

Just today, however, that session has been "postponed until further notice." The reasons are left vague. Might be a good story to dig into for the Northern View.