"One simple conclusion: a massive amount of money from China entered the Vancouver real estate market in the past year or so." -- Josh Gordon, Simon Fraser University public policy professor 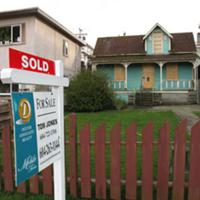 Call it the "China Syndrome" -- an unfortunate paralysis afflicting Canadian politicians and stopping them from speaking the truth about what is happening to B.C.'s housing market.

The reality, Josh Gordon wrote last month, is that an enormous amount of Chinese capital is flooding in to buy Vancouver homes. The National Bank of Canada estimates Chinese buyers spent $12.7 billion in Vancouver alone in 2015 -- that's about one-third of all sales!

It's part of the estimated US$1 trillion that left China in the last 18 months seeking safe investments.

And there's much evidence that buyers from China are scooping up vast swaths of the available homes and driving prices sky high and out of reach of ordinary Canadians.

Davidoff said there's "a flood of cash" from foreign buyers looking for a safe haven. "This year its China, who knows next time," he said. "Rich people who want to go to a low tax, low regulation, high safety environment, great physical space, are going to want to come to Vancouver."

But federal, municipal and especially provincial politicians are all scared witless to say out loud what everyone else knows: we are letting ultra-wealthy Chinese and other investors make housing unaffordable. Not just in Metro Vancouver, but in Victoria and other regions.

Not racist to talk about foreign investment and affordability

Some thought that was xenophobic. In fact, it is simply protecting the ability of ordinary British Columbians to afford housing in their own communities.

Gordon's detailed study looked at the causes of the radical increase in housing prices in Metro Vancouver. He's careful to note that pointing out the facts about the impact of Chinese buyers is not racism.

"The problem is that the money is foreign, and that it is sufficient to seriously distort the housing market, not that it is Chinese money," Gordon writes.

Exactly. And then he hits the nail on the proverbial head.

"Most citizens want to be able to have a chance to buy decent real estate if they work hard and play by the rules; in Vancouver that is becoming increasingly difficult, in large part because of massive flows of money from abroad," Gordon says in the report titled Vancouver's Housing Affordability Crisis: Causes, Consequences and Solutions.

Both Davidoff and Gordon have lots of potential solutions to stop the insane housing price escalation -- something to discuss in a future column.

But they both likely know the province won't act as long as the real estate industry that profits enormously from selling homes to foreign buyers also contributes huge amounts to the BC Liberal Party. Gordon even refers to the influence of Bob Rennie, the real estate mogul who also heads Premier Christy Clark's fundraising efforts.

That would be the Rennie who recently suggested action to curb foreign real estate investment would start a trade war. "China buys $6 billion a year in British Columbia exports," he said. "Are we going to tamper with those jobs and our economy?"

Gordon calls out those who fund political parties.

"The fundraising is being dominated by prosperous developers and others closely tied to the housing boom," he writes. "This is the second lesson about housing market politics from the past decade: inside players, with large vested interests, are willing to shovel over massive amounts of money to political parties to keep the boom booming."

Gordon says the political right and left have been reluctant to confront the impact of foreign real estate investment.

But he notes that only the BC Liberals who oppose a ban on corporate and union political donations. The provincial NDP and the city's Vision Vancouver have repeatedly called for such a ban, which is already in place federally.

Gordon says the BC Liberals run the risk of being caught in a real estate crash.

"The provincial government has put itself in a tight spot: ride the bubble or tackle it and basically admit that they screwed up," he writes. "I highly doubt the latter. And so this problem will worsen, at least so long as China's own worrisome housing and credit bubble continues."

Turning Vancouver into a 'playground for elite'

The government has put itself in the "rock and a hard place' situation, Gordon says.

"They have been in power for 15 years and this crisis has been a long time in the making. At a number of crucial points they have in fact tried to silence criticism and deflect attention from the issue. Perhaps more unsettling, they've recently doubled down," Gordon writes.

Indeed, the BC Liberals' response to soaring house prices has been to tinker around the edges to make it appear they are addressing problems. Nothing substantive has yet been proposed, let along implemented.

That means the crisis is coming. And Gordon predicts taxpayers will be on the hook to come to the real estate industry's aid. "Then, when the bubble bursts, the rest of us are forced to pick up the tab, and indirectly bail these people out," he adds.

If nothing changes, argues Gordon's paper, "Vancouver is well on its way to becoming simply a pretty resort town."

"Many people who grew up in the City of Vancouver, West Vancouver, North Vancouver and to a lesser extent Burnaby and Richmond do not have a realistic chance of owning a house in these places, and even a family-friendly condo is a stretch for many."

And, as Davidoff says, "As long as money floods in, in the long run this is going to be a global playground for the elite, and not a place to live and work, a place to have money and not to make money."