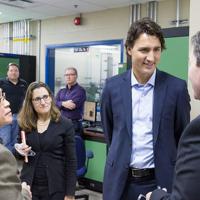 Canada Will Sign TPP Thursday, but Deal Far from Done

I oppose free trade. Am I right wing or left wing?

That is indeed a puzzler. One does like to know whether they are right or left -- otherwise the ushers can get very confused. And if you lose track of which group you're in, there is the very real danger that one day you might show up at a Barry Goldwater Memorial Pot Luck & Pig Roast carrying a vegan string bean casserole. Awkward.

So where does opposition to free trade place you? Britain's so-called Brexit debate has made strange bedfellows of Conservative Prime Minister David Cameron and avowedly democratic socialist Labour leader Jeremy Corbyn. Corbyn is arguably the closest thing to a British Bernie Sanders, yet he joins Cameron in advocating the maintenance of Britain's European Union trade partnership.

Meanwhile Andrea Leadsom, one of Cameron's Conservative cabinet ministers, sounded a Trumpian note with her argument that Britain should leave the EU because there have been too many immigrants. "In my own area of Northamptonshire, people write to me saying: 'I walk down the shopping street in Northampton and I don't hear any English spoken,'" Leadsom told The Guardian.

In the U.S., opposition to free trade might identify you as a Sanders supporter. Or it might mark you as a Trump follower. Both men bash free trade policies with vigour.

For his part, Sanders says international free trade deals work to the benefit of multinational corporations at the expense of ordinary working people. Pro free trade views would be as welcome in the Sanders camp as mosquitoes in a Brazilian maternity ward.

The question of whether free trade benefits or harms our economy is emotional. The debate is reminiscent of one that recently resulted in a police incident in Brockville, Ont. Police and firefighters were called to a local park where a family argument had resulted in a propane tank being thrown into a campfire. The question at issue: whether the Earth is round or flat. Police reported that "neither party would change their views."

Positions on free trade are similarly intractable. Establishing whether free trade is a positive or negative economic force is about as simple as standing in a Saskatchewan wheat field attempting to prove the Earth is round.

Dr. Steve must confess at this point that it is beyond his power to establish a definitive verdict on free trade. But as a spin doctor he does know something about emotional arguments. And free trade, like so many issues, is generally debated on terms that are anything but factual. Free trade may be complex but the emotional narratives are simple -- foreigners and/or shadowy Wall Streeters are cheating you.

If you're a Trump supporter, you hate and fear the devious Chinese and the threatening Mexicans. If you're a Sanders supporter, you fight the menace of global capital. Either way your position on free trade is a political badge. One might attempt to argue that a particular free trade agreement ought to be judged by its particular clauses. But that would be silly. Free trade is about who you are and what you choose to believe, neither of which can be stated as a statistical value.

The 1988 Canadian election was fought on the issue of the North American Free Trade Agreement. One of the most brilliant political ads of the campaign was a Liberal spot showing U.S. NAFTA negotiators taking issue with one particular line. "It's this line," the U.S. representative says, while erasing the Canada-U.S. border.

Anyone who has attempted to breeze through the Peace Arch crossing lately knows how that worked out.

Decades later, debates over NAFTA still simmer. Who won? Mexico did. Unless of course Mexico lost. Or the results were mixed.

But all but the most fervent propane-tank-throwing opponents ought to concede that NAFTA did not destroy Canadian economic sovereignty. If it had, what would Canadian opponents of TPP be fighting to preserve now? It would already be too late.

Anti-free trade narratives in every country tend to be similar. Canadian free trade opponents say we are giving away the store to U.S. interests; Americans say it's the U.S. that is being taken to the cleaners; Third World nations say free trade agreements are tools of First World exploitation. Can everyone be losing the free trade game?

Free trade is not a round Earth/flat Earth debate -- calculation of its effects tends to depend on which economist has the podium. But that doesn't matter to the debate, which rarely involves facts anyway.

So take the free trade position that suits you best, Puzzled. But in order to display your political inclinations you'll need something else -- bumper stickers. Examples: "Nuke Their Ass, Take Their Gas," or, "Vote Democratic -- We're Not Perfect, But They're Nuts." That should clear it up.