[Editor's note: Canada's Liberal government has abandoned its Conservative predecessors' decade-long opposition to the United Nations Declaration on the Rights of Indigenous People. But what does it mean, exactly, if, as Indigenous and Northern Affairs Minister Carolyn Bennett said earlier this month, ''We are fully adopting this and working to implement it within the laws of Canada''? We asked Romeo Saganash, who helped draft the Declaration more than 30 years ago as a young member of his Quebec Cree nation and who now represents the riding of Abitibi-Baie-James-Nunavik-Eeyou as its NDP Member of Parliament, for his insight.] 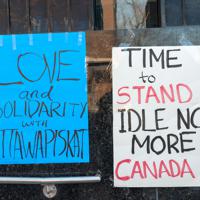 Over the next 23 years, representatives at the Working Group on Indigenous Peoples discussed and refined the document on behalf of their nations. When the General Assembly adopted the Declaration in September 2007 [editor: with Canada voting against], it became the only UN declaration ever drafted by the rights-holders themselves: Indigenous Peoples.

To me, the Declaration embodies the most important rights our ancestors have long fought for. Minister Bennett's recent public statement was very important. It was the Government of Canada proudly pledging to adopt and to implement the UN Declaration. That is, to create legislation reflecting its intent, as well as policy and programmes to make those intentions reality.

Since Canada endorsed the Declaration in 2010, many legal decisions and international agreements have solidified its importance. Despite misconceptions seeded by the former government that continue to be propagated by editorial boards, think-tanks, and academics, the UN Declaration is the premier international guide detailing how governments should respect the rights of Indigenous Peoples and fulfil other obligations contained in international conventions and agreements.

For that reason, I have for a second time tabled a bill in the House of Commons, Bill C-262, to ensure that the laws of Canada respect the UN Declaration and allow us to move forward to redress past wrongs. Statements by the Ministers of Justice and Indigenous Affairs pledging to work cooperatively to pass this bill as soon as possible would be a welcome response.

Previous governments and their advisors made extreme statements regarding the Declaration on the Rights of Indigenous Peoples. In particular, the previous government spoke of the principle of ''free, prior and informed consent'' (FPIC) as a ''veto'' power to foster alarm and opposition to Canada's [2010] endorsement of the Declaration. It is important to correctly understand the differences.

The Supreme Court of Canada has not defined what ''veto'' means in the context of Indigenous Peoples' rights and related Crown obligations. The Court did not use the term in the landmark 2014 Tsilhqot'in Nation decision that addressed Indigenous consent in detail. Neither is it in the Declaration.

''Veto'' implies an absolute power, with no balancing of rights. Article 46 of the Declaration addresses the need to balance the specific collective and inherent rights of Indigenous Peoples with the human rights of all peoples. In contrast to ''veto,'' the term ''consent,'' in the Indigenous context, has been extensively elaborated in Canadian and international human rights law. And Canada cannot selectively ignore the rulings of its highest court; to do so is inconsistent with the principles of justice, equality, rule of law, and respect for human rights.

To suggest that the Declaration erodes the legitimacy of states is another extreme statement that merely serves to create fear and misunderstanding. International treaties, conventions, and agreements are clear on this issue: the Declaration does not create new law.

Understanding this is vital. The UN Declaration on the Rights of Indigenous Peoples only reaffirms existing legislation and international agreements that all nations are already obliged to uphold.

The Declaration sets out minimum standards for the ''survival, dignity and well-being'' of Indigenous Peoples around the world. National legislation implementing those standards will provide clarity on jurisdiction and process. It will be a catalyst to repeal the Indian Act. It will formally reject historically distorted doctrines of a European ''discovery'' of a terra nullius (or ''empty land''). And it will explicitly reject colonialism in favour of a contemporary approach based on justice, equality, respect for human rights, and good faith.

The bill I have moved will also ensure that impacts such as intergenerational trauma, severe impoverishment, epidemics of suicide, impairment of mental and physical health, and profound loss of hope, will receive well-deserved attention.

I am compelled by the work of the Truth and Reconciliation Commission. The TRC heard our collective experiences in every individual's testimony and issued Calls to Action to honour our communities and ancestors. The commissioners were clear that reconciliation is only possible if the federal government fully adopts and implements the UN Declaration.

An elder used to remind me: we must do what we ought to do on issues that are difficult and challenge our integrity. The time for the Government of Canada to make amends is now. I am proposing cooperative, concrete action. I think the political and public will exist to propel Bill C-262 through the House and into law.