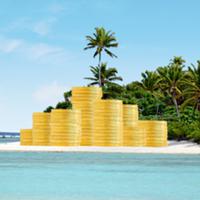 We will not be distracted forever by your explanation of quantum computers and yoga poses. Or even by the admittedly impressive list of low-hanging fruit (most recently, the return of the long-form census) you have picked thanks to Stephen Harper.

It's a comforting distraction to think that we might actually have a government that isn't totally in the thrall of Bay Street billionaires and transnational corporations. But everything we know about your party suggests that nothing fundamental has changed. The litmus test will be how you deal with KPMG over an outrageous tax-avoidance scheme, and with the giant firm's apologists in the Canada Revenue Agency.

By now most people are familiar with the KPMG tax "sham" uncovered by CBC News. The scheme involved at least 26 wealthy clients (minimum contribution, $5 million) for whom KPMG set up shell companies in the Isle of Man, one of many tax havens for the rich and large corporations.

The Canada Revenue Agency initially said the scheme was "grossly negligent" and "intended to deceive."

But 15 of the 26 participants would end up getting special treatment. Some of the first ones caught were assessed huge penalties, but later KPMG clients were offered a secret deal. The "amnesty" agreement granted rich KPMG clients immunity from civil and criminal prosecution and freedom from any penalties, fines or interest as long as they paid the taxes they had dodged. Secrecy was written into the agreement: "The taxpayer agrees to ensure the confidentiality of the offer and will not inform any person of the conditions of the offer..."

Dennis Howlett of Canadians for Tax Fairness [disclosure: I am on the board] said KPMG should be charged with facilitating tax evasion. Other tax experts said a criminal investigation is warranted.

Canadian anti-fraud lawyer Martin Kenney thinks Canadian authorities should be prosecuting more often. "If there's clear tax evasion, you have to put some people in jail to make it clear people should not be playing games with their tax returns." And Duane Milot, a Toronto tax lawyer with middle-income clients who end up in court agrees: "It's outrageous. The CRA appears to be saying to Canadians, 'If you're rich and wealthy, you get a second chance, but if you're not, you're stuck.'"

People do go to jail for tax evasion, but the richer you are and the more tax you evade the more likely it is that you'll get away with it. The CRA justifies the practice, saying it's too expensive to take the big fish to court and fight the best lawyers money can buy. "CRA practice also recognizes that the earliest possible resolution of disputes is in the public interest, as lengthy litigation is costly to all parties and the outcome of complex, tax-related litigation processes may be difficult to predict," CRA media relations officer Philippe Brideau said in a statement.

Right now, the CRA seems uninterested in pursuing these cases. In spite of the renewed focus on tax havens and the unprecedented revelations of the Panama Papers, the stalling and obfuscation on the part of the CRA and KPMG continues.

The revenue agency's investigation into KPMG's tax scheme has been stalled for more than three years, and no one will explain why. According the CBC's investigation, "In February 2013, a federal court judge ordered KPMG to turn over a list of unidentified multimillionaire clients who placed their fortunes in an Isle of Man tax shelter scheme." KPMG has still not complied and the fact that the CRA has not requested a court date to enforce its court order has been described as "mysterious." Maybe not.

The practice of making deals and providing amnesty for the biggest offenders seem rooted in the cozy relationship between senior CRA officials and senior management figures from the accounting firms that facilitate the scams. The CBC uncovered five years of expensive receptions hosted by KPMG and other accounting and law firms for senior agency executives -- including those involved in overseas compliance.

"Senior enforcement officials from the Canada Revenue Agency were treated to private receptions at an exclusive Ottawa club, hosted by a small group of influential tax accountants that included personnel from KPMG -- even as the firm was facing a CRA probe for running a $130-million tax dodge in the Isle of Man," the CBC reported.

Despite strict rules stating employees must "not accept gifts, hospitality, or other benefits that will, or could, have a real, apparent or potential influence on your objectivity and neutrality in performing your CRA duties," these unseemly get-togethers became routine. One that took place at the exclusive Rideau Club in June 2014 saw more than 20 "high-ranking CRA executives" wined and dined by accountancy and law firms including KPMG. CRA executives were actually "required" to attend by the agency. The same day they had been treated to a luncheon followed by a session where they were lobbied by KPMG and other firms.

Confronted by this obvious conflict of interest, CRA assistant commissioner Ted Gallivan had the gall to say "We try to have a culture in CRA where executives are trying to be responsive to the citizens that we serve, which includes large accounting firms. I don't think it's a problem." It's an attitude shared by Gallivan's boss, CRA commissioner Andrew Treusch, who dismissed any notion of impropriety by saying he had never discussed the KPMG litigation with any representative of the firm. That's hardly the point. Sharing "scallop ceviche, duck rillettes crostini and herb-roasted rack of lamb" has a moderating impact on prosecutorial zeal.

Regrettably, there is a distinct lack of public outrage at this disgusting display of privilege, contempt for the public interest and for the law. Why are Treusch and Gallivan still in their jobs? And why did MPs let KPMG executive Greg Wiebe, with an arrogance matching the CRA executives, stonewall the parliamentary committee examining the issue by citing "client confidentiality?" This is sheer nonsense. There is no legal basis in Canada for accountant-client confidentiality, and any claim is outweighed by parliamentary privilege.

If Justin Trudeau can't deal with the rot in his own rogue agency, his carefully crafted political persona will be permanently tainted. What will remain is the same old Bay Street Liberal Party unashamedly serving the rich and powerful.