It is difficult to predict what kind of misstep can seriously tarnish a government's reputation. Some mistakes have legs and others, inexplicably, don't. 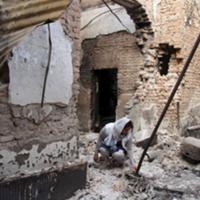 Bombing Hospitals Is a War Crime, Even When Your Friends Do It

But the stunningly stupid decision to go ahead with a $15-billion sale of light-armoured vehicles (LAVs) to Saudi Arabia has the potential to expose Prime Minister Justin Trudeau as a phony.

You could hardly design an issue so perfectly fitted to reveal a government with a progressive public face contradicted by a ruthless disregard for human rights. It raises the question of whether the spin doctors simply misjudged the extent of public revulsion or whether there is something deeper going on. Is it really just about jobs or is there a hard-nosed commitment, inherited from the Conservatives, to a backward Middle East foreign policy?

Foreign Affairs Minister Stéphane Dion has been severely damaged by his performance on the Saudi arms sale file. First he said the government couldn't get out of the contract, claiming it was legally committed by the Conservative government's actions. That was not true.

Dion compounded his credibility problem with another misleading claim that he was following Canadian law in signing the export permits.

After a Globe and Mail editorial accused him of hypocrisy for approving the sale, Dion attacked the newspaper, claiming that "the Foreign Affairs Minister may block the exports permits at any time if there were serious evidence of misuse of the military equipment." That is, presumably, after our LAV's have been used to attack civilians.

But in fact the export control guidelines don't refer to "serious misuse" but to whether "there is no reasonable risk that the goods might be used against the civilian population."

Saudi Arabia's hideous human rights record is amongst the worst of the worst. And in fact the Saudi government has used exactly this kind of armoured vehicle against its own dissenting citizens.

According to Belkis Wille, Yemen researcher for Human Rights Watch, "The Saudis have used such vehicles to violently suppress peaceful protests in eastern Saudi Arabia in 2011 and 2012."

Is there a "reasonable risk" that it will do so again? Everything we know about the new and far more aggressive regime in Riyadh today says yes. In January the regime executed 47 prisoners (most by beheading) on a single day. The regime executed 151 in 2015 -- the most in 20 years.

The Saudi government described those on Jan. 2 executed as "terrorists," but the law defining terrorism includes anyone who demands reform, exposes corruption or otherwise engages in dissent or violence against the government. We don't know how many were executed for acts of violence and how many for "dissent."

The arms sales guidelines aim to protect the civilian population of the country buying the weapons. But surely the Trudeau government should consider the use of its exports against civilians anywhere to be a human rights deal-breaker.

Saudi Arabia's brutal bombing campaign in Yemen against the Houthi rebels has sparked outrage in most Western capitals. The United Nations Panel of Experts on Yemen "documented 119 coalition [bombing] sorties relation to violations" of the laws of war.

It is precisely this situation that has prompted Canada's allies in the European Parliament "to launch an initiative aimed at imposing an EU arms embargo against Saudi Arabia."

Dion and his boss would like us to believe that Saudi Arabia's total disregard for civilian lives and its targeting of medical facilities in Yemen (a possible war crime) are irrelevant when it comes to signing arms exports permits.

But many governments, international agencies and NGOs disagree. In swimming against the international tide Dion's new foreign policy philosophy -- "responsible conviction" -- might better be called "conviction when convenient."

But putting all this down to a botched political calculation regarding Canadian jobs is not very convincing. Does this ugly bit of Trudeau policy reveal something more substantive? What does it say about the government's overall Middle East policy?

One of the reasons Dion has given for the arms sale is that Saudi Arabia is an ally in the fight against Islamic extremism. But anyone with knowledge of its roots knows that Saudi Arabia is the motherland when it comes to radical Islam. Right now in the U.S. there is a fierce debate about whether to release a secret 28-page section of a 2002 congressional report on 9/11, dealing with possible involvement of elements of the Saudi regime in the terror attacks.

While it is still early days in the Trudeau government, signs of a significant shift in Mideast policy are still nowhere to be seen. A 2013 assessment of Trudeau's likely approach to the Israeli-Palestinian conflict suggested major shifts in balancing the interests of the two sides. But so far Canada's support for Israel seems unwavering.

Trudeau supported a Conservative resolution that would have the government "condemn" any advocacy for the BDS (boycott, divest, sanction) campaign for Palestinian rights. He also opposes the European Union's new initiative that require products from Israeli settlements in the occupied Palestinian territories to be clearly labeled. And there seems to be little if any movement on Trudeau's commitment to re-engage with Iran.

While policies supporting both Israel and Saudi Arabia may seem contradictory, they are in fact quite consistent. The two countries share a number of common enemies, including Shia Islam, Iran, pan-Arab nationalism, the Assad regime in Syria, and Hezbollah. They are also the most vociferous regional opponents of U.S. and EU efforts at achieving a rapprochement with Iran. If Canada doesn't move on its pledges of policy change, it will find itself increasingly at odds with the U.S. and EU. At no time in the past three decades has the tension between the U.S. and Israel and Saudi Arabia, its two principal Middle East allies, been greater.

One way for Dion to indicate he's not offside on rebalancing Canada's Mideast policy would be to end his self-righteous posturing on the Saudi arms deal and reverse the export permits.