"My mission is to persuade activists to stop ignoring failures and to stop repeating tactics." -- Micah White, The End of Protest: A New Playbook for Revolution, 2016 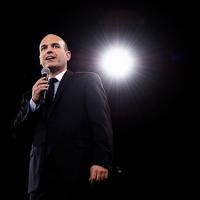 It's the height of irony that while Occupy Wall Street's co-founder outlines how protests are finished and electoral success is critical, the federal New Democratic Party will talk about a protest movement for the next two years.

And so while Micah White's new book outlines how the Occupy movement, marches, social media clicktivism and "environmental materialism" have all failed and that new approaches to win elections are needed to achieve progress, the NDP convention jumped at the chance to discuss in every riding the radical Leap Manifesto that relies on tired tactics and failed leftist/enviro rhetoric.

That's why Alberta's NDP Premier Rachel Notley strongly opposed the move, saying that the Leap Manifesto is naïve, ill-considered and tone-deaf, and that it "doesn't actually reflect NDP values" by failing to understand working people's need for economic security and stability.

That sets the stage for a true reckoning between social democrats who say don't Occupy and don't Leap -- and those who do.

BC NDP leader John Horgan also quickly dismissed the Leap Manifesto, which has been fronted by Toronto filmmaker Avi Lewis and author Naomi Klein, who are married.

"In total collectively it doesn't reflect the values of British Columbians. Our past and our future will be dependent on the development of natural resources," Horgan said last week.

"We won't be proceeding under any Leap Manifesto... under my leadership," he added, to be even clearer.

Given Maclean's magazine's current cover story with a photo of Klein and Lewis surrounded by the headline: "How To Kill The NDP," that's understandable.

To be fair, Lewis admits the negative response to the release of the Leap Manifesto during the 2015 federal election surprised him.

"We know this is an ideological battle. What we did misjudge was how this would be used against the NDP. That was certainly not our intent. Maybe we were a bit naïve," Lewis told Maclean's last week. "People have said it's the NDP's left flank attacking [then-NDP leader Tom] Mulcair. That's not true, but we lost control of that narrative."

That narrative is critical to winning elections -- and White says to think that anything but elections will change society is wrong.

"Occupy was holding assemblies in public squares to create a consensus-based democracy that we hoped would give us broad social legitimacy. The thinking was that, if every day people convened in these democratic assemblies, the police wouldn't be able to attack us because we would be the sovereign power," White told The Globe and Mail in March.

"Well, we realized that that's not true. Actually, sovereignty, in our societies, is only given to the people who either win elections or win wars. Winning wars isn't possible or desirable. Winning elections actually seems like something that can happen," White said.

But there is another important ideological battle going on as well -- over pay for play politics in both the United States and British Columbia.

White's book points out that the original and single aim of the Occupy Wall Street movement he co-created with Adbusters magazine founder Kalle Lasn was simply to get big money out of American politics.

"If money determines electoral victory and corporations and unions are able to give unlimited amounts of money, then it is clear that elections are no longer being decided by the people," White writes, outlining how a single #OccupyWallStreet hashtag on Twitter launched an international protest.

The BC Liberals have been raising triple or more of what the NDP can collect, thanks to massive corporate contributions, giving them an enormous electoral campaign advantage.

And White stresses that it's those elections -- not protests -- that can bring real change.

"We need to build social movements that can win power -- which means being able to swing elections, hack elections," White told CBC TV this month.

"The 99 per cent could really be governing the world in our lifetimes -- that's the kind of grand vision that we're heading towards," White says.

But getting there won't happen with old-style protest politics, he adds.

"It's beholden on activists and everyday people to see that we're in one of those moments where protest isn't working and break out of it," White told CBC.

"We can't stay here, we can't stay in a time when we just kind of go through the rituals of marching and stuff like this where even though we really know it isn't going to do what we want."

In The End of Protest, White takes straight aim at one of the left's most predictable tactics.

"No more marches. Orchestrating a synchronized global march with millions of people in the streets rallying behind one demand is an impressive logistical feat that attracts tremendous publicity, but it is not an effective method of social change," White writes.

"The fact is that governments today are not required to listen to their citizens or heed their marches."

That message isn't very welcome to some, like those who organized giant climate change rallies, White admits.

"I do think I've become kind of unpopular in the activist community. They like to tell one story. Nothing's ever a failure. 'We're actually winning' -- this feels really good when people say this to themselves, but it doesn't help us learn anything," he told the CBC.

White also has alienated environmentalists with a withering critique of their failures in his book.

"To move forward, environmentalism must end its obsession with materialism," White writes. "There has been a fetishization of our ability to correlate climate change with scientifically verifiable hypotheses."

"Environmentalists got stuck in proving the scientific argument and have been falling down the rabbit hole of computer models and intellectual abstraction ever since."

White is not anti-environmentalism; indeed he says that "it is the ecological struggle that has the greatest potential to unite humanity."

But White is very clear once again that anyone taking the same approaches that doomed Occupy Wall Street and other mass protests simply will not work.

Neither Occupy nor Leap -- just win elections. It's a revolutionary idea.