Are Trade Minister Chrystia Freeland's officials misleading her about the Trans-Pacific Partnership (TPP)? 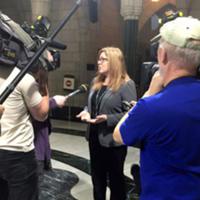 Freeland signed the agreement Thursday in New Zealand, but repeated her assurances that critics shouldn't worry -- the government hasn't committed to ratifying it and consultations and a full debate will precede a vote in Parliament. That could be up to two years away.

Yet so far the consultation process has not penetrated the ideological bubble created by trade department officials.

Take one example. By far the biggest concern of critics (including Nobel Prize-winning economist Joseph Stiglitz) is the Investor State Dispute Settlement (ISDS) provision. This allows corporations to claim damages if they believe a government's laws or regulations unfairly harm their interests or hurt profits.

Freeland seems to be either ill informed or misled about the provision's impact. At a panel discussion in Vancouver last month she seemed unaware of the ISDS. Her fellow panelists, both economics professors, downplayed the threat.

For many of us who have dealt with trade bureaucrats promoting these investment protection agreements it is easy to suspect that Freeland is being deliberately misinformed by her own staff.

The Trudeau government is eager to portray itself as open to persuasion on the TPP. To bolster the position that they still might say no, the government has engaged in a flurry of consultations across the country and has made a point of inviting concerned citizens to send in questions and criticisms to Global Affairs Canada: TPP-PTP.consultations@international.gc.ca.

Sounds good. But the execution raises serious questions about how genuine the consultation will be.

First, the vast majority of consultations have been with groups supportive of these agreements: Provincial government ministers, business groups, industry reps, universities, etc. Of 74 such meetings (as of Jan. 31), there have been a handful with "students" (but not with student council representatives who have actually studied the TPP) and a couple with labour -- with the Canadian Labour Congress and Unifor.

There have been no meetings with NGOs who have taken the time to examine the TPP closely, like the Council of Canadians and the Canadian Centre for Policy Alternatives, with First Nations (whose agreements with governments can be trumped by ISDS) or environmental groups.

Obviously there is still time for such engagement, but the process so far does not bode well for balanced input.

The more serious sign that trade officials are busy manipulating their minister is revealed in the answers the government provides to Canadians who take it up on the offer to engage. When they write to the government asking about investment protection and the ISDS in the TPP, here's the response they get: "With respect to Investor-State Dispute Settlement (ISDS), the TPP will not impair the ability of Canada or its partners to regulate and legislate in areas such as the environment, culture, safety, health and conservation. Our experience under the NAFTA demonstrates that neither our investment protection rules nor the ISDS mechanism constrain any level of government from regulating in the public interest."

This is so demonstrably false as to shock even the most jaded cynic. Does Freeland know what is being said in her name? Since the North American Free Trade Agreement came into effect on Jan. 1, 1994, Canada has been the target of 35 investor-state claims under the agreement. Nearly two-thirds involved challenges to environmental protection or resource management laws or regulations. Canada has already paid out more than $170 million in damages in six cases (lost or settled) and abandoned most of the "offending" legislation and regulations. We face additional corporate claims totalling more than $6 billion in potential penalties for NAFTA "violations" such as the Quebec government's decision to ban fracking under the St. Lawrence River.

This does not take into account the legislation and regulations (federal and provincial) that have never made it out of their cribs, killed by the chill of knowing they wouldn't pass ISDS muster. A recent UN report quoted a former Canadian official as saying: "I've seen the letters from the New York and D.C. law firms coming up to the Canadian government on virtually every new environmental regulation... Virtually all of the new initiatives were targeted and most of them never saw the light of day."

In one of the most egregious cases decided under NAFTA, Bilcon of Delaware, a tribunal effectively overruled federal and provincial governments' environmental concerns last year and allowed a quarry to go ahead in Nova Scotia. University of Ottawa law professor Donald McRae, one of the tribunal members, wrote a detailed dissenting opinion warning of the negative impact of the decision.

"Once again, a chill will be imposed on environmental review panels which will be concerned not to give too much weight to socio-economic considerations or other considerations of the human environment in case the result is a claim for damages under NAFTA Chapter 11," McRae wrote. "In this respect, the decision of the majority will be seen as a remarkable step backwards in environmental protection."

Even one of NAFTA's strongest supporters, Toronto trade lawyer Larry Herman, expressed concern that the dispute tribunals were unilaterally expanding their mandate to circumvent domestic courts. The decision, Herman observed, "will feed ammunition to those who oppose international arbitration as a form of dispute settlement."

Just as these unaccountable panels are expanding their powers to interfere in the democratic legislative process, Canada is about to extend these arbitrary powers to corporations in nine more countries in the TPP.

Yet so far the "ammunition" provided by this evidence has run smack up against the Kevlar vests in the Global Affairs bureaucracy. The department's name has changed under the Trudeau government, but its approach is powerfully reminiscent of the bad old days of the Department of Foreign Affairs and International Development, when a priesthood of trade bureaucrats protected the Holy Grail of "free trade" against all detractors. So deeply did they believe in their mission that factual analyses of agreements like NAFTA and the Multilateral Agreement on Investment (MAI) were not even acknowledged, let alone heeded.

"Federal government trade negotiators sold free trade by overstating the upsides and underestimating the downsides," he says. ¨This was especially true of investor-state provisions, which had the potential to be lethally damaging to critical social policy areas such as medicare or the environment. These public servants appeared to have little knowledge of these social policy areas and little concern. During my tenure I never saw any independent analysis that demonstrated why provisions in trade treaties were necessary or how the broader public good would be served. It often felt like being in a temple of true believers and those of us who questioned the doctrine were heretics."

Is there any way to counter the pernicious influence of these free-trade zealots? The most powerful antidote would be independent analyses of the controversial areas of the TPP -- in other words, genuine consultation. The only time this has been done was under the NDP government of Glen Clark, which provided funding for many social sectors -- such as First Nations, women, unions, and environmentalists -- to hire experts and study the impact of the Multilateral Agreement on Investment on their constituencies. The resulting studies led the B.C. government to oppose the MAI (which eventually failed to win needed international support).

If Prime Minister Justin Trudeau and Freeland are truly committed to broad consultation beyond the business community, they should follow the same model.

The Canadian Environmental Assessment Agency already does something similar. Its Participant Funding Program "supports individuals, non-profit organizations and Aboriginal groups interested in participating in federal environmental assessments." It would be a tragic irony if this consultation program led to new environmental legislation -- which then triggered a multi-billion-dollar claim by a foreign corporation under the TPP.