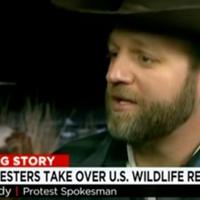 It's a question many Canadians are asking as they watch Republican presidential nominee candidate Donald Trump gain more popularity with each more outrageous statement.

Or when a bunch of ornery yahoos occupy an Oregon wildlife refuge with guns aplenty but not enough food to last any longer than the Alamo.

Or when the American response to a mass shooting like those at San Bernardino or the Sandy Hook Elementary School in Newtown, Connecticut is to buy more guns in a country with 89 guns per 100 people.

For Canadians who love their neighbours but seriously question their intelligence at times like these, it's a troubling thought.

Unfortunately, the easy way out is to simply ridicule those who live south of the world's longest, friendliest border.

Canadians can't seem to get enough of U.S. late-night television hosts delightedly denouncing Trump's travesties. We guffaw at the overwrought but underfed occupiers in Oregon, or cringe watching President Barack Obama openly cry at his country's astonishing lack of gun control, even as school children are massacred by monsters.

And admittedly, the idea of a President Donald Trump running the most powerful nation in the world is both absurdly humorous and frighteningly possible.

But to simply scoff and write off the support Trump enjoys, the backing Oregon militiamen actually have, and Americans' love of guns from our superior northern vantage point would be ignorant on our part.

A smarter approach is to look at why Trump appeals to many U.S. voters -- and could win the Republican nomination, possibly the presidency.

Trump is a rich, self-serving windbag who will say almost anything to earn headlines -- from promising a literal wall to keep out Mexicans border jumpers to temporarily banning Muslim immigrants and refugees from entering the United States.

And with quotes like this, he alienates entire countries: "When Mexico sends its people, they're not sending their best... They're bringing drugs. They're bringing crime. They're rapists. And some, I assume, are good people."

Yet each time Trump blows up another media controversy bomb, his popularity explodes.

But behind the hype is a truism -- that Americans are deeply worried about terrorism killing them and immigration taking away their jobs in a troubled economy.

Trump intuitively gets that fear and plays to it brilliantly in his campaign, reinforcing negative stereotypes while disregarding plain truths.

And that doesn't matter -- because the alternatives seem far worse and more suspect.

The other Republican nominees are lacklustre losers compared to the billionaire blowhard -- can Canadians criticize Americans for backing Trump when the other choices are Ted Cruz or Ben Carson or Marco Rubio or Jeb Bush?

Trump is also using his wealth as an advantage -- paying the full bill for his campaign instead of depending on the insanely expensive American political system that is dominated by giant corporations and the rich -- whether the candidates are Republicans or Democrats.

The Oregon occupiers mine a similar turf -- right-wing distrust in big government combined with anger at national parks expanding to take away land used by ranchers.

And those Americans buying more guns to protect themselves in a country with an insane number of gun deaths -- 33,636 in 2013 -- are expressing their disbelief that government can protect them from terrorists and gangsters. And I say that as someone with a restricted weapons license who is not anti-gun.

Obama's failed efforts to control guns have only resulted in more Americans packing heat -- the share value of major gun makers Smith & Wesson and Sturm, Ruger & Co. have gone up an amazing 900 per cent since he took office in 2009. Compare that to Standard & Poor's 500-stock index, which only rose 147 per cent in the same period.

"Mr. Obama is the best gun salesman on the planet," said Louis Navellier, chairman of the Nevada investment firm Navellier & Associates, which bought firearm stocks heavily and is profiting as a result.

Off that high horse!

Are Canadians really so different and more sensible?

One of the key factors generally acknowledged in Liberal Prime Minister Justin Trudeau's election win was his celebrity status -- he has 1.25 million Twitter followers.

And Trump has been a celebrity for decades -- but his 5.6 million Twitter followers are proportionately far less than Trudeau's despite being in a country 10 times larger.

Let's hope we are immune to a Canadian version of Trump. But don't condemn Americans as "idiots" simply because some desperately support what we see as terribly faulty solutions to very real problems.