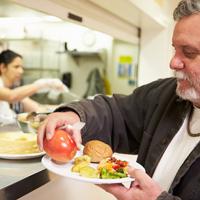 If Jesus came back to Earth on his birthday this Christmas, one of his first missions would be to close food banks -- all of them.

Not because they aren't vitally important in feeding the poor but because food banks are not a solution to poverty -- and never will be.

Here in B.C. food banks were first started 33 years ago as a temporary measure to deal with growing numbers of people going hungry.

It's definitely not working.

More than 100,000 people visited a food bank for help in B.C. this past March, a 2.8 per cent increase over last year. And nationally, 852,137 people needed groceries from a food bank, a one per cent jump, with over one third served being children.

"Food banks don't solve the problem, they ameliorate the problem," says Bill Hopwood of anti-poverty advocacy group Raise the Rates. "We know people are hungry and we know they need food."

Jesus said 2,000 years ago, according to the Bible: "When you give a banquet, invite the poor, the crippled, the lame, and the blind. And you will be blessed."

And Jesus told the rich to sell their goods and give them to the poor.

Hopwood told me in an interview Sunday that food banks are merely treating a symptom, not the problem.

"If people kept falling off a cliff and injuring themselves you don't build a hospital at the foot of the cliff, you put up a fence at the top," he said.

And yet B.C. is the only province with no poverty reduction plan to put up that much-needed fence, despite more than 400 organizations calling for one.

Even worse, the BC Liberal government has frozen abysmally low welfare and disability benefits rates since 2008 -- meaning already inadequate financial support for those in need has been eroded by cost of living increases.

Could you live on just $610 a month for shelter and food and all other expenses?

That's the pathetically low amount single people on welfare get. And those with disabilities that prevent them from working only get $906 monthly.

Why won't Premier Christy Clark -- a regular churchgoer -- follow the Bible and find a way to help the poorest among us with a rate increase?

That's urgently needed, Hopwood says, along with more affordable housing, an increase in the minimum wage and accessible childcare.

But the BC Liberals are doing next to nothing on those either.

Every holiday season the media make special efforts to raise funds for food banks and other worthy causes that help those in need -- and I applaud that as well as donate.

Unfortunately, media don't do such a good job explaining why increasing poverty exists in an extremely wealthy society -- and why food banks are not the answer.

Raise the Rates held a "Poor People's Radio" protest with about 80 attending outside CBC Radio and Television's Vancouver headquarters last Friday -- and issued a news release urging CBC to talk about ending poverty on Food Bank Day and question politicians on air about it.

But Hopwood says neither CBC nor any other media covered the event or called about it.

"The media feel that tackling the root causes is too difficult and we have to do something now," Hopwood told me. "The amount of money the CBC raises will feed each person who uses food banks in BC for two days. What about the other 363 days of the year?"

Hopwood is very clear that Raise the Rates is grateful that CBC and the many donors it encourages are helping out. The CBC raised $537,000 this year.

"We cover these topics year-round and, as is our tradition, put additional focus into them in the weeks leading up to Open House and Food Bank Day. This includes issues of poverty and hunger and the need for sustainable food security options," Michel wrote.

"We agree that existence of food banks is not a permanent solution to hunger and poverty," Michel concluded. "However, it's a critical need for thousands of people and CBC will continue to support where we can."

Hopwood agrees on that but points out that after 29 years of CBC Food Bank Days, the problem is getting worse.

Quinn pointed out that most on welfare or disability benefits are:

"People who, through no fault of their own, have ended up where they are. Those people deserve the same right to dignity as anyone else. My mother always told me that beggars can't be choosers.

"That will be true as long as we make them beg," Quinn wrote.

It all raises even more difficult questions about the very tenets of charity.

Peter Buffett, chair of the NoVo Foundation in the United States and son of billionaire investor Warren Buffett, wrote a provocative article for the New York Times accusing the wealthy of using charity as a pressure valve that avoids the need for social change.

"It's what I would call 'conscience laundering' -- feeling better about accumulating more than any one person could possibly need to live on by sprinkling a little around as an act of charity," Buffett wrote.

"But this just keeps the existing structure of inequality in place. The rich sleep better at night, while others get just enough to keep the pot from boiling over," he argued.

"But as long as most folks are patting themselves on the back for charitable acts, we've got a perpetual poverty machine. It's an old story; we really need a new one."

It's a story as old as the Bible -- and the ending isn't getting any better every Christmas since.