"A walk about Paris will provide lessons in history, beauty, and in the point of life." -- Thomas Jefferson, third U.S. president, 1743-1826 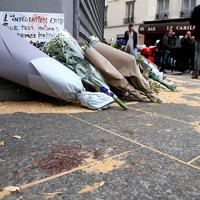 Responding to Paris, and the Endless Retribution Cycle

The Paris terrorists will never win.

Their attack on unarmed civilians in one of the world's most visited cities illustrates their weakness, not their strength.

The Islamic State of Iraq and Syria (ISIS) has claimed responsibility for killing 129 people and wounding 352 in six coordinated attacks.

ISIS got what it wanted through this slaughter -- to instantly dominate the news, sparking enormous concern among people around the world.

I understand that because I have family living in Paris -- my cousin, his wife and daughter -- all thankfully safe, though they live near the site of several attacks, the Place de la Republique.

But indiscriminately murdering innocent people in restaurants, clubs and concert halls before killing themselves with suicide bombs demonstrates the terrorists' inability to win in Iraq, Syria and the Middle East or anywhere else.

They cannot succeed militarily, so they resort to cowardly attacks on "soft targets" -- civilians -- in foreign countries where the very liberty ISIS denies in the small areas it controls in the Middle East makes such massacres possible.

The Paris attacks are sadly echoed by the earlier deadly assaults on the magazine Charlie Hebdo and other sites in that city in January.

But terrorists have used the same approach for centuries, particularly in the recent past.

And yet, have they changed the course of history in the way al-Qaida, ISIS or other terrorists hoped? No.

"ISIS is a threat, no doubt about that. Should we fear it? No," said Sajjan, a former army lieutenant-colonel who served in Afghanistan. "The Canadian population should have full confidence in all the security services to keep us safe."

Sajjan is quite correct -- ISIS is a threat, once again exhibiting the same ruthless brutality it used to parade foreign hostages in front of cameras and later behead them.

And Sajjan is also right that we should not fear it.

ISIS's goal with these attacks is simple -- gain global publicity in order to "terrorize" the public and presumably force governments to leave it alone.

While people are horrified, the terror hasn't worked to win its broader goals, nor will it.

ISIS and other terrorist have additional goals: to damage the global economy; to devastate tourism and travel around the world; and to stop aid to refugees fleeing from terror in Syria and Iraq.

And ISIS is fundamentally opposed to the basic tenets of democracy.

In addition to committing barbaric acts of murder, it has blown up historic sites of antiquity that have value to the entire world, such as the destruction of the ancient Temple of Baalshamin in Palmyra, Syria, in August.

Similarly, in the alleged ISIS claim of responsibility for the Paris massacres, the group says the city was targeted because it is a "capital of prostitution and obscenity."

As a regular visitor to Paris, such views are both absurd and offensive. Paris has long been a beacon of civilization, tolerance and culture.

As the late actress Audrey Hepburn said: "Paris is always a good idea."

That's why those who value democracy, liberty and freedom around the world must not let ISIS succeed.

Canada's humanitarian effort to help 25,000 Syrian refugees find a better life here must not become another victim of terrorism.

Yes, we must take all appropriate security measures to ensure only legitimate refugees are admitted, as we should with anyone coming to Canada.

But we must not let terrorists frighten us into failing to do the right thing.

Early reports that one of the terrorists had a Syrian refugee passport should not be taken as gospel truth -- the facts will come out in the full investigation, and the trade in stolen and fake passports is enormous.

What's more, remember that those Syrian refugees are the victims of ISIS, not its supporters.

Aaron Zelin, an analyst of jihad, made this central point in response to the fear of some refugees being future terrorists.

"For those who want to blame the attacks on Paris on refugees, you might want to get your facts straight. The reality is, (ISIS) loathes that individuals are fleeing Syria for Europe. It undermines (ISIS's) message that its self-styled caliphate is a refuge," Zelin wrote.

And we must personally not allow ISIS to stop us from seeing the world and its wealth of different cultures.

Add to what Jefferson said above these words from the great American travel guide Rick Steves: "We owe it to the victims of this act not to let the terrorist win by being terrorized. That's exactly the response they are hoping for... keep on travelling."