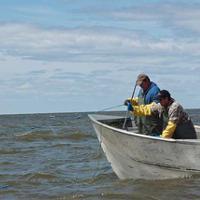 Dismantling of Fishery Library 'Like a Book Burning,' Say Scientists

Rooting around in a dumpster looking for treasure is unseemly and demeaning for anyone. Maybe more so when the dumpster diver happens to be a federal agricultural scientist who is trying to save some choice publications from being destroyed after a federal agricultural library in Lethbridge, Alberta is closed down. Seems pathetic, right?

Pathos -- a quality evoking pity and sadness -- is the word that surfaces as Canadians see what's happening in Harper's War on Science. In the case of the Lethbridge library, the government said it isn't closing but "modernizing" by digitalizing services, and that it would keep "all materials of business value." But how can we know what research will be saved?

There's a certain Fahrenheit 451 quality to the destruction of federal libraries, independent research centres and evidence-based decision-making agencies. As reported in The Tyee, over the years the federal government has closed or consolidated federal libraries from Parks Canada, Environment Canada, Natural Resources Canada, Foreign Affairs, Citizenship and Immigration and Canadian Heritage. One of the most heartbreaking responses I've seen is an agonizing letter signed by dozens of Parks Canada officials begging the leaders of the three other federal parties to promise they won't allow the continued "purging of science-based management" in Canada's national parks. Pathos indeed.

Harper's War on Science, which includes the shuttering of numerous storehouses of Canadian institutional memory, the Lethbridge dumpster stint, and the dismantling of an important aquatic and fishery library are tragedies that are rarely explained. When pushed, Harperites offer the counter-narrative that these things must be "modernized" and that changes for the sake of "efficiency" and "effectiveness" are inevitable.

Let me be charitable and say that from my island in the world of health and pharmaceutical policy research, those arguments are mostly crap. It's like saying we should get rid of drug safety research for "efficiencies," i.e.: so people would take more drugs. The health-related body count in the War on Science is now at the rafters, so let's hit the highlights.

For starters, no one has done more than women health advocates to advance drug safety, protect child and elder health and resist the medicalization and pharmaceuticalization of human health than anyone on the planet. For the last two decades, I've sent anyone asking me where Canadians can go for good, clean, unfiltered information about women's health issues to the Canadian Women's Health Network (CWHN).

Independent, hard-hitting and utterly invaluable, it was forced to close its doors last year after its funding was terminated. Equally valuable and sorely missed is the funding for Health Canada's Women's Health Contribution Program (WHCP), cut in 2013, which meant that all Centres of Excellence for Women's Health and other partner organizations lost their funding.

Now, in what appears to be the unkindest cut of all, Cochrane Canada, the Canadian arm of the Cochrane Collaboration, funded through the Canadian Institutes of Health Research (CIHR), had its funding cut in September of this year. Canada is one of 120 countries involved in this international non-profit organization that promotes evidence-based decision-making in healthcare. The main output: "high-quality systematic reviews that are free from commercial sponsorship."

Cochrane is an institution that is so low-key it's almost a secret among the general public, but its high-value, low-cost "evidence synthesis" is absolutely vital for making good quality health policy or medical decisions. Cochrane's independent worldwide network of nearly 40,000 healthcare practitioners, researchers, and patient advocates (most of whom toil as volunteers) collect, sift and 'systematize' research evidence for making health decisions. It has been likened to the Human Genome Project in terms of its potential impact on human health. Why is it so valuable? Because most serious thinkers know that outside of high-quality synthesized research, which separates wheat from chaff, most health information is marketing.

"These kinds of syntheses are essential," says Katie Gibbs, the Ottawa-based organizer for Evidence for Democracy, a group that is trying to push for something really simple and unassailable: basing governmental decisions on evidence, not politics.

She has also seen the politics and the marketers getting the upper hand. While those close to the decision to cut Cochrane Canada's funding maintain that it was an internal CIHR decision, Gibbs agrees that it fits the "death of evidence" theme of this government.*

Canada's biggest research funding bodies like CIHR and NSERC (the Natural Sciences and Engineering Research Council) are increasingly shifting to "applied research," the kind of stuff that demands researchers find industry ‘partners' to produce the next widget for the market.

I agree, yet when you see the makeup of the boards overseeing the work of CIHR and NSERC increasingly dominated by industry-friendly appointees, including, remarkably, a Pfizer vice-president appointed to the CIHR governing council, you can see how the government's interests may be changing.

Obviously not all governments -- especially the current one -- like to be exposed to evidence that shows their policies to be less than perfect. For example, the Cochrane Influenza review group has done extensive analyses of the anti-flu drug Tamiflu, stockpiled in the billions by Canada's government. Those analyses, along with others, posed questions about the drug's effectiveness. As taxpayers, we need to be demanding more of Cochrane's independent reviews.

Gibbs points to the quality of information our physicians are fed and reminds me why we need groups like Cochrane providing good quality evidence: "Practicing MDs need synthesized evidence, and since there is so much literature that comes out, it's impossible for doctors to keep up. They don't have time to access scientific journals."

Chucking Cochrane Canada into the dumpster might make sense to the Harper government, which asks: Why can't health professionals and policymakers get their evidence from the manufacturers and the marketers?

When evidence-based bodies that should be funded by the taxpayer are increasingly taken over by the captains of industry, we'll likely only be left with stuff that belongs in a dumpster. And that, frankly, is where no one should be diving.

*Updated Oct. 16 at 11:15 a.m.: In a statement sent Oct. 16, a CIHR spokesperson noted the agency has invested $17 million in Cochrane Canada over the past decade through a direct-grant approach.

"While CIHR believes the contributions of the Canadian Cochrane Centre have been valuable and of very high-quality, the agency also recognizes the need for greater consistency, transparency and accountability around funding decisions," the statement said. "As such, the Canadian Cochrane Centre has been encouraged to apply for new support through the same process used to support other health research initiatives: our investigator-initiated funding opportunities."