How will you celebrate Labour Day this year? A last picnic or barbecue before the season changes has become a Canadian tradition, and I hope all Tyee readers will enjoy that relaxing annual ritual or some other event that provides family pleasure and togetherness. 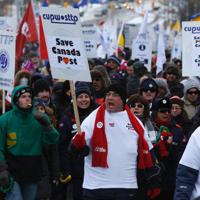 Harper's Conservatives No Friend to the Union Worker

Speaking of togetherness, we wouldn't have Labour Day at all without the existence of an important example of social solidarity: Canada's organized labour movement. Spare a thought on Sept. 7 for the many benefits unions have created for members and for all workers.

In addition to being grateful for the autumn holiday, we need to remember that the union movement has won Canadians the 40-hour work week, the eight-hour day, annual vacations, publicly funded health care, employment standards enforcement (however spotty that has been under B.C.'s current government), minimum wage legislation and a salary premium for union members that averages $5.28 an hour compared to unorganized workers' wages.

Some on the left have indulged over the years in condemning Labour Day as a management friendly, anti-radical labour holiday, in contrast to May Day, the "true" workers' holiday. As Mark Leier lucidly explained in a Tyee column a few years ago, this approach over simplifies complex history, and doesn't lead to any useful action. Let's all learn from Leier's eloquent and erudite essay to celebrate both days, and to take steps together to make every day Labour Day in Canada. – TS

Given the benefits created by organized labour for everyone who works for a living, I urge readers to not only reflect with justifiable pride on what we have collectively created, but also take concrete action to further the unfinished project of justice and fair play for all workers. Here are a few suggestions for steps you could take this Labour Day.

1. Picnic. It's not Labour Day without hotdogs. Consider attending one of the labour-sponsored picnics and galas taking place across the country today. If you live in the Lower Mainland, you might check out the BC Federation of Labour's event at Swangard Stadium (Kingsway and Boundary) from 11 a.m. until 3:30 p.m. Other planned B.C. events are listed here.

2. Commit to activism. If you belong to a union already, vow to become active in your local to help protect and extend the benefits described above. Attend regular meetings, or consider running for office or volunteering on local committees. Urge your local and your national union to stay active in the wider fight for social justice, both across organized and unorganized sectors in Canada -- especially by being part of support pickets when other workers are on strike or locked out -- and through international solidarity with workers around the world fighting to enjoy some of those benefits in their home countries.

3. Learn about organizing. If you are not currently in an organized workplace, consider learning more about your options. Changes in labour law brought in by anti-labour governments in Victoria and Ottawa have made it harder to organize new workplaces, and easier for employers to force unions out of the workplace. But unions are fighting back with outreach campaigns to help workers in unorganized workplaces sign up enough members to trigger a certification vote, even under the new and more restrictive rules.

Experiments like the BC Federation of Labour's Employee Action and Rights Network and Unifor's Community Chapters represent attempts by organized labour to find ways to serve those who have not yet achieved union certification, especially the growing population of young and old workers shunted from one precarious part-time job to another as employers, particularly in service and retail sectors, do their best to cut costs and increase profits.

4. Get active in the upcoming federal election. Do some research and determine which parties and candidates support fair play for workers (spoiler alert -- it isn't the Conservative party, as this recent Tyee account of Harper's many anti-worker initiatives and other abuses demonstrates.)

5. Help end the war on workers. Write letters to the editor and to your MPs calling for an end to the Conservative government's anti-labour agenda, which has included strike-breaking, back-to-work orders, new rules to make it more difficult for workers to win new union representation and easier for employers to coerce unionized workers to de-certify, and a ludicrous new regime about financial reporting that imposes harsh and unprecedented reporting requirements on unions.

6. Get tough on corporations. Particularly those that aren't doing their fair share to compensate workers. For example, as a Labour Day exercise, you could stop by your local Walmart -- the world's largest private sector employer with over two million employees -- and tell management there that you want the company to pay its North American workers a living wage, and provide fair compensation to its Bangladeshi workers who died in factories making clothes for the retail giant. While you're at it, urge Walmart to endorse a pioneering factory safety initiative in that long-suffering country.

Walmart is one good candidate for a Labour Day visit, but if you value the fragile human rights won by organized labour and civil society campaigns around the world, you might want to make a resolution to research the rights record of all the places you shop (much easier now in the age of Internet searches) and let retailers know you put your money where your values are.

7. Demand negligent employers be held to account. Get informed about the Stop the Killing, Enforce the Law campaign. Led by the United Steelworkers, this campaign is demanding the proper enforcement of Canadian laws that allow Crown counsel to lay criminal charges when management negligence, greed and corner-cutting endanger the lives of workers. So far, the law has been woefully under-enforced. Let your local candidate for Parliament know you want swift, effective action on the matter.

8. Support #refugeeswelcome. Take a moment in the spirit of Labour Day -- which is, after all, about human solidarity -- to petition the government to take a much more active role in welcoming refugees to Canada. We had our hearts broken by the recent images of a Syrian child lying dead on a Turkish beach after trying to escape the war zone and come to Canada, but the child is only one of the almost 60 million displaced around the globe this year, half of them children, and only one of over 45,000 people who have died as refugees trying to cross borders since 2000. Canada could and should be much more generous in welcoming some of these refugees, and Labour Day is an appropriate time to tell the government so.

So, friends, Happy Labour Day. Hope you and yours enjoy the day off, and that you are able to spare a few minutes to take up some of these suggestions. Have a beer, have a hotdog, and have a heart.