"We have met the enemy and he is us." -- Walt Kelly in Pogo comic strip 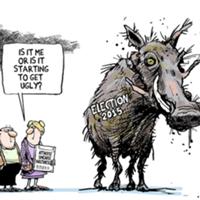 Whew, What a Turn Off!

If you are tired of the increasingly nasty approach to politics, and hate attack ads that disparage opponents rather than offer solutions -- there's someone you can blame.

Take a look in the mirror, because it is voters who want politicians to bring the nastiness to elections -- and reward those who do with victory.

That's the unfortunate conclusion of a new United States study that found 38 per cent of both Republicans and Democrat voters believe that any means necessary should be used to win elections.

Those tactics include: "Voter suppression, stealing or cheating in elections, physical violence and threats against the other party, lying, personal attacks on opponents, not allowing the other party to speak and using the filibuster to gridlock Congress."

Patrick Miller, a University of Kansas political science assistant professor and co-author of the study, says voters behave more like sports fans obsessed with their team's victory, rather than show interest in public policy issues.

"For too many of them it's not high-minded, good-government, issue-based goals. It's 'I hate the other party. I'm going to go out, and we're going to beat them.' That's troubling," Miller says.

Miller's study is a clear warning to Canada as the New Democrats, Conservatives and Liberals fight a three-way election battle.

"Competitive elections are making you hate the other party more. They're having a 180-degree opposite effect from what we think they should," Miller said.

"Instead of bringing us together to talk and deliberate, they're making us hateful people who are disengaged from our fellow citizens."

Former Liberal leader Michael Ignatieff found out how rough politics can be when he was targeted by relentless Conservative advertising prior to the 2011 election that said he was "just visiting" Canada after a long, distinguished career as an academic in the U.S.

"I took the attacks personally, which is a great mistake. It's never personal: It's just business. It was ever thus," Ignatieff wrote last November in The New Republic magazine.

"I went into politics thinking that, if I made arguments in good faith, I'd get a hearing. It's a reasonable assumption, but it's wrong," said Ignatieff, who led the Liberals to their worst defeat.

While Ignatieff's failure to counter the Conservative attacks should have been ample warning to current Liberal leader Justin Trudeau, the "just not ready" line repeated in thousands of television and radio ads has damaged his chances.

But there are no choir boys in the church of politics.

The NDP has released a brutally effective attack ad on the Conservatives asking: "Have you had enough?" featuring a parade of MPs, Senators and staff who have been convicted, charged or are under investigation for alleged crimes or rule breaking.

The ad ends with a shot of Harper's former parliamentary secretary Dean del Maestro being led away to jail in leg irons by police earlier this year after his conviction for electoral fraud. On YouTube alone, it's had over 604,000 views since July 13.

The Conservatives are now training their guns on NDP leader Tom Mulcair as "another career politician we can't afford" with ads similar to the Trudeau "resume review" approach.

Trudeau says the Liberals won't be launching attack ads like the Tories or NDP.

"Once you attack, you divide people and we need people to be brought together so I'm going to let Mr. Harper continue to make the mistakes he's making by underestimating Canadians..." Trudeau told Global TV in July.

That approach may be brave, but politically foolish.

Here in British Columbia, the New Democrats in 2013's election refused to use attack ads on Liberal Premier Christy Clark's highly tarnished record -- and leader Adrian Dix lost a race that all the polls indicated he should win.

Before that election I wrote a column with research showing that not only did voters dislike negative ads, but that they were also often counterproductive. But I also warned that Dix was taking the biggest political risk of his career.

Unfortunately, the 2013 B.C. election results and the recent University of Kansas study show that shunning attack or "contrast" ads is simply the wrong strategy.

Sadly, it appears that attack ads and over-the-top partisanship are not only on the rise, but the consequences are severe.

It goes well beyond seeing the Donald Trump train-wreck Republican campaign apparently benefitting from the billionaire's trashing of Mexicans, women, fellow Republicans and others -- since he is now leading the contenders.

In Missouri, Tom Schweich -- a leading candidate for the Republican nomination for governor -- shockingly committed suicide in February after becoming the target of negative radio ads and what he called an anti-Semitic "whisper campaign."

"Politics has gone so hideously wrong, and that the death of Tom Schweich is the natural consequence of what politics has become," former U.S. senator Jack Danforth said in a powerful eulogy for the man he mentored.

"Words do hurt. Words can kill. That has been proven right here in our home state," Danforth said.

"There is no mystery as to why politicians conduct themselves this way. It works. They test how well it works in focus groups and opinion polls."

Danforth ended with a plea: "Politics as it now exists must end, and we will end it. And we will get in the face of our politicians, and we will tell them that we are fed up, and that we are not going to take this anymore."

But unless voters truly reject attack ads, negative campaigning and hyper partisanship, elections will continue to get nastier -- because it works.