"Here's my melodramatic theory: social media lost Labour the last [United Kingdom] election and it's going to lose Labour the next one, too." -- Helen Lewis, The New Statesman, on U.K. election results 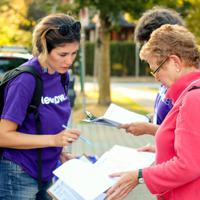 Will Canadian "slacktivists" blow progressives' chance to defeat the Conservatives by overemphasizing social media instead of old-fashioned electoral politics?

That's a serious concern after the United Kingdom's Labour Party focused heavily on tweeting to victory and instead did a Facebook face plant, losing the May election and forcing leader Ed Miliband's resignation.

"A lot of what happens on Facebook, as with Twitter, is 'virtue signalling' -- showing off to your friends about how right on you are," Helen Lewis wrote in The New Statesman.

"It was this 'Tyranny of the Like' that had many social media users convinced that Ed Miliband could squeak the election," Lewis said.

Brand utterly reversed himself -- from saying he had "never voted" and that "like most people I am utterly disenchanted by politics" -- only to endorse Miliband after the Labour leader appeared on Brand's million-subscriber webcast just before the election.

But despite Brand's boost, the Conservatives easily won a majority victory.

And that illustrates the danger of confusing social media sensations with actual votes.

But will failure to follow old school campaigning with door-knocking, leafleting, local meetings and direct involvement with political parties' efforts lead to another Tory majority?

Leadnow says it won't fall victim to "clicktivism" -- where voters think social media activity takes the place of actions like campaigning and casting a ballot.

"Our campaign is modeled on the [Barack] Obama campaign's successful integration of online and face-to-face organizing," Possian says.

"Both tactics have an important part to play in our strategy for connecting people who want change, helping them to select and support the best local candidate to win, and getting out to vote to defeat Harper and build for lasting change after the election."

"Even 'clicktivism' -- tweeting, liking, or adding your email to online petitions, ultimately a less impactful version of writing to your congressperson -- has its place. But policy shifts and paradigm shifts require more than a click," The Yes Men wrote.

Leadnow believes it is bridging the social media and real worlds in its efforts.

Swing and a miss?

But Leadnow's "Vote Together" campaign as of Sunday had about 53,000 pledgers who said they will "vote strategically" in 72 key swing ridings and elsewhere to elect whichever parties' candidate can defeat the Conservative there.

And the Conservative Party's official Facebook page has over 146,000 "likes" -- they aren't ignoring social media either.

Possian isn't worried Leadnow will have too few pledgers to impact the results.

"We're very happy to have connected with 52,000 Vote Together pledge signers by week two of an 11-week federal election," she said. "In the last federal election, just over 6,000 votes in the closest 14 ridings made the difference between a majority and minority government."

For the strategic voting promoted by Leadnow to have worked in 2011, about half of the 8,552 New Democrat voters would have needed to switch to the Liberals -- a very tall order.

Leadnow also faces another significant problem -- the New Democratic and Liberal parties don't agree with their strategic voting plan to defeat Conservatives and are running full slates of candidates competing in every riding.

That means Leadnow needs voters to have more brand allegiance to their organization than to a political party voters may have supported for decades.

Many New Democrats do not agree that the Liberals are "progressive" and many Liberals find the NDP too left wing.

"It is hard enough convincing someone that a minority movement can win, but that difficulty is compounded many times over when the movement itself is full of the type of people who do not actually care about winning," Bruenig wrote in 2013.

"Most people, especially those people you should want to attract to your side, do not want to waste their time doing things that will achieve nothing," Bruenig says.

"Winning things from time to time and being able to articulate a vision of how this is supposed to work that is halfway plausible is the only way to attract the kind of people who are able to moderate leftist dipshittery," Bruenig concludes.

Those who want to defeat Harper in October need to learn lessons from the United Kingdom's May Conservative victory -- and not lean too heavily on social media to make change.