In the quiet of summer, a couple of U.S. scientists argued in the pages of the Proceedings of the National Academy of Sciences that modern civilization has drained the Earth -- an ancient battery of stored chemical energy -- to a dangerous low. 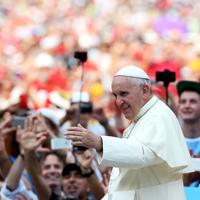 In Church of Climate Change, Good Catholics Must Practise and Preach

Although the battery metaphor made headlines in leading newspapers in China, India and Russia, the paper didn't garner "much immediate attention in North America," admits lead author John Schramski, a mechanical engineer and an ecologist.

And that's a shame, because the paper gives ordinary people an elegant metaphor to understand the globe's stagnating economic and political systems and their close relatives: collapsing ecosystems. It also offers a blunt course of action: "drastic" energy conservation.

It, too, comes with a provocative title: "Human domination of the biosphere: Rapid discharge of the Earth-space battery foretells the future of humankind."

The battery metaphor speaks volumes and then some.

It took hundreds of millions of years for photosynthetic plants to trickle charge that battery. Those plants converted low quality sunlight into high-quality chemical energy stored either in living biomass (forests and plankton) or more lastingly in the dead plants and animals that became oil, gas and coal.

But in just a few centuries humans and "the modern industrial-technological informational society" have spent that stored chemical energy and depleted the Earth-space battery.

Society partly drains the battery by converting forests and grasslands into agricultural fields. It diminishes the battery further by burning fossil fuels to plow fields and build cities. Human engineering of one kind or another has left a mark on 83 per cent of the planet.

In essence, humans depleted the battery to grow exponentially and spend more energy.

"As the battery discharges," the scientists write, the cooling, heating and electronic services provided to the house "become unavailable and the house soon becomes uninhabitable."

The Earth is like a dying cell phone at an airport, says Schramski, but with no rechargeable plug in sight.

The problem, say the scientists, is that the battery is not being replenished as quick as it is being drained.

Schramski adds a good point: "Eventually, without sufficient living biomass to run the biosphere, it simply doesn't matter how much oil, solar, nuclear, etc. energy you have, as there is no biosphere left for humans to use it. Biomass is not an interchangeable energy. There is no replacement and we are depleting it rapidly."

Some 12,000 years ago, hunter-gathers lived in equilibrium: they rarely took more from the battery than its trickle charge rate.

But due to technology, city-making and population growth, human activities are rapidly draining the battery through forest removal and fossil fuel use.

"As we burn organic chemical energy, we generate work to grow our population and economy. In the process the high-quality chemical energy is transformed into heat and lost from the planet by radiation into outer space," explains Schramski and his colleagues.

Or, in scientific jargon, "The flow of energy from cathode to anode is moving the planet rapidly and irrevocably closer to the sterile chemical equilibrium of space."

It's the laws of thermodynamics in action, explains Schramski, a mechanical engineer by training.

Oil companies, dams and solar networks can't create energy: they can only tap in to the flow and transform it into a useful form. And in the process of transforming the fossil fuels, heat is lost into the atmosphere and eventually space.

All of this energy consumption from stored biomass has left an ugly trail of carbon dioxide and methane emissions that are now creating climate chaos and acidifying oceans.

According to Schramski, the stored living biomass portion of the battery represents the basis for sustaining all life on Earth and is what distinguishes us from the other planets in our solar system.

At the time of the Roman Empire, the Earth held 1,000 billion tonnes of carbon in living biomass, which equaled about 35 zettajoules of chemical energy.

Meanwhile chain welding, soil eroding and bulldozing humans have whittled the Earth's net primary production down to 550 billion tonnes of carbon in biomass and thereby depleted the battery to 19.2 zettajoules. That's a significant drop.

Annual energy spending by humans now averages 0.5 zettajoules and keeps on growing like a succession of rocket blasts to Mars.

"I'm not an ardent environmentalist; my training and my scientific work are rooted in thermodynamics," Schramski says. "These laws are absolute and incontrovertible; we have a limited amount of biomass energy available on the planet, and once it's exhausted, there is absolutely nothing to replace it."

The paper goes on: "The Earth is in serious energetic imbalance due to human energy use. This imbalance defines our most dominant conflict with nature. It really is a conflict in the sense that the current energy imbalance, a crisis unprecedented in Earth history, is a direct consequence of technological innovation."

But market economists (and their related politicians) don't understand the Earth battery metaphor anymore than they do the laws of thermodynamics, says Schramski and his collaborators.

"Ironically, powerful political and market forces, rather than acting to conserve the remaining charge in the battery, actually push in the opposite direction because the pervasive efforts to increase economic growth will require increased energy consumption."

"We all have car batteries," says Schramski, who calls himself an accidental environmentalist. "And we have all left the lights on and found the battery dead." And that's what energy consuming economic growth models are doing to the planet.

Schramski and his colleagues haven't really said anything new in the science world. Popular biochemistry textbooks spell out the crisis loudly.

Brilliant Russian physicists have warned for years about the dangers of depleting biomass on the planet. Howard and Eugene Odum, two pioneering U.S. ecologists, offered similar cogent insights in the 1970s. And climate scientists are now warning about the battery's deadly emissions on a daily basis.

But what makes Schramski's paper noteworthy in an election year is the power of the battery metaphor, as well as the paper's irrefutable calculations on the importance of trees, grasses and kelp beds.

In this regard, the draining of the Earth battery gives ordinary people a more accurate picture of where they stand in the scheme of things than any political party nostrums about growth and global trade.

Surprisingly, the metaphor also defines the nature of the spiritual crisis now confronting every living being.

In his Encyclical Letter Laudato Si', Pope Francis eloquently described the crisis with the kind of language Saint Francis once used.

"If we approach nature and the environment without this openness to awe and wonder, if we no longer speak the language of fraternity and beauty in our relationship with the world, our attitude will be that of masters, consumers, ruthless exploiters, unable to set limits on their immediate needs. By contrast, if we feel intimately united with all that exists, then sobriety and care will well up spontaneously. The poverty and austerity of Saint Francis were no mere veneer of asceticism, but something much more radical: a refusal to turn reality into an object simply to be used and controlled."

And yes, the Earth's dying battery should be an election issue -- and god forbid, a media story.