One way of looking at the current election is to see it as a massive civic literacy test, not just for those who actually intend to vote but for those who mistake cynicism for sophistication and stay glued to their iPads instead. As David Akin of the Toronto Sun once said, "Bad governments are elected by good folks who don't vote." While every election can be seen in this light, the level of deception and manipulation characterizing the Harper government demands that we be especially vigilant. 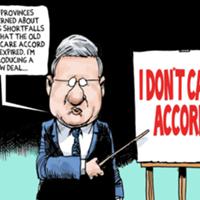 With Vultures Circling, It's Time to Care about Medicare

A case in point was a recent statement by federal Conservative Health Minister Rona Ambrose that captured the party's use of populism to bamboozle voters. Ambrose declared: "I believe that when it comes to the cost of prescription drugs, Canadians are being ripped off." Taken at face value, you would be forgiven if you thought the Libertarian Party of Canada had done a 180 degree turn and was testing the waters for a promise on pharmacare.

Well, no. Ambrose's declaration was one more instance of gross hypocrisy on the part of a government that treats hypocrisy as a governing principle. What actually agitated Ambrose was how much it cost the federal government to provide drugs to First Nations, veterans and soldiers, and prison inmates. She was hoping for inclusion in the provinces' Pan-Canadian Pharmaceutical Alliance aimed at securing cheaper prescription drugs through bulk buying.

But everything this government does reveals it couldn't care less about whether or not "Canadians" are being ripped off. First up is the corporate rights agreement still being negotiated with the European Union. The Comprehensive Economic and Trade Agreement (CETA), according to a study by the Canadian Centre for Policy Alternatives (CCPA), will not only increase drug costs to individual Canadians by between $850 million and $1.645 billion (an increase of between seven and 13 per cent) annually, it will give giant pharmaceutical companies even more power to delay the entry of cheaper generic drugs onto the market. It will add two years to the patent protection period and lock in these new rules, making it virtually impossible for future governments to reverse the change, and give the companies access to a new appeal process, further delaying generics.

CETA is not the only agreement the drug companies are pushing with all their might. The Trans-Pacific Partnership (TPP) -- which thankfully seems to be on life-support after failed negotiations in Hawaii -- would give even more powers to drug companies. Thanks to Wikileaks, we have some information on this otherwise super-secret process. According to Dr. Roslyn Fuller of Global Research, "some of the TPP provisions may facilitate a tactic known as 'evergreening' in which companies procure patent extensions on the basis of minor changes to the patented formula (e.g. exchanging one inactive ingredient for another, or coming up with a secondary use for the medication), and in limiting the criteria a product must fulfill in order to be eligible for a patent." The draft TPP is pushing for "a radical increase in the duration of patent protection for vaccines and some forms of cancer treatment."

While some countries have pushed back on the efforts to give more power and profits to the drug companies, Canada has said nothing, and by its silence automatically comes down on the side of Big Pharma in the TPP negotiations.

Ambrose's faux outrage is revealed by the fact that the Harper government (and Liberal governments' preceding it) have followed policies that have made Canadian drug costs the second highest in the world, outdone only by the U.S. The drug companies have been ripping off Canadians for two decades, but they couldn't have done it without the active collusion of federal governments.

Federal governments have tried to justify coddling these super-profitable transnationals by extracting promises from them regarding research and development in Canada. In 1987, just before they received patent protection in the Canada-U.S. Free Trade Agreement, the drug companies committed to invest 10 per cent of their sales revenues into research and development. But according to the CCPA study, "Since 2003, Canadian brand-name manufacturers have consistently failed to meet [these] pledges…According to the latest data, in 2012 the R&D-to-sales ratio fell to 6.6." Federal governments have made no effort to hold them to account.

Does Ambrose know that signing the TPP and CETA will make it far worse for government drug purchase? Of course she does -- her throw-away populist line was just that. If it wasn't, rather than seeking to join the provinces in purchasing cheaper drugs Ambrose would support national pharmacare. But that is never going to happen. Eric Hoskins, Ontario's Minister of Health, invited the feds to a national round table on pharmacare -- and the Harperium said no.

In addition, Harper's newest Supreme Court appointee, Albertan Russell Brown, has made it clear that he thinks the federal government should not be involved in health care at all. He attacked the Canada Health Act in his personal blog as an intrusion into provincial jurisdiction and was "delighted" by a 2005 Supreme Court decision that opened the door to private health coverage in Quebec, saying it struck "at the heart of exclusive state-provided health care."

The Harper government is more at odds with Canadians over public health care than it is on any other issue. And pharmacare demonstrates this in spades. According to an Angus Reid poll in July, 91 per cent of Canadians support a national pharmacare program. Forum Research conducted a poll in June asking voters which issues would actually persuade them to alter their voting intentions. Tied for first place with increasing Canada Pension Plan benefits and reducing the eligibility age for Old Age Security back to 65 from 67, was the establishment of a national pharmacare plan, "with 42 per cent of voters very likely to alter their voting intention for a party that promised to create such a plan."

So why are none of the opposition parties listening?