Many of Canada's federal general elections have been fought, and won or lost, on a single, dominant issue. In 1911 the battle was over free trade with the U.S. (The Tories fought it and won.) In 1988 it was free trade again. (The Tories were for it, and won.) During the two world wars conscription was the hot item. And this year? 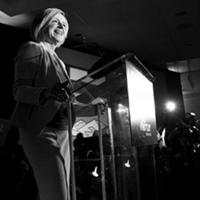 Would you believe corporate taxes?

Lately that's the one topic provoking the New Democratic Party to attack Justin Trudeau, and Stephen Harper and his Conservatives to assault Tom Mulcair.

Only the NDP is proposing a boost in corporate taxes, which might pull some five billion more dollars into the Canadian treasury yearly. The Tories, meanwhile, say the rate shouldn't budge and Trudeau has mused aloud about cutting it further.

So what are the facts about corporate taxes in Canada and what the parties are arguing?

Down, down, down: A brief history

Concerted efforts to whittle down the corporate income tax (CIT) rate by Liberal governments led by Jean Chr&eacutetien and Paul Martin saw it further cut to 21 per cent in the early years of the new century.

Harper's Conservatives won their first minority government in 2006, and kept slashing the CIT rate. It was at 19.5 per cent when the Tories captured a second minority in 2008, and then down to 16.5 per cent as voters prepared to go to the polls in 2011.

Campaigning four years ago with a vow to further lower the corporate rate, Harper was rewarded with his first electoral majority. He promptly trimmed the CIT rate to 15 per cent, effective Jan. 1, 2012.

Then led by Michael Ignatieff, the Liberal Party of Canada in 2011 promised to stop Harper's corporate tax reductions. The Grits committed to re-raise the rate to where it had been in 2010, or 18.0 per cent.

Jack Layton's New Democratic Party similarly pledged to reverse the Conservatives' scheduled CIT reductions, and to reinstitute the business-profits tax rate at its 2008 level, which was 19.5 per cent.

The New Democrats also had a corollary pledge: they would cut Ottawa's small-business CIT rate from 11 to nine per cent.

Barring some unforeseen event, Harper may again be expected to guide his Conservatives into the general election scheduled for Oct. 19.

It's also unlikely the Tories will offer any new wrinkles when it comes to the general CIT rate.

That promise is identical to the one made in 2011 by Layton and the New Democrats when they surprised the country by winning enough House of Commons' seats to become -- for the first time in history -- the Official Opposition.

Now led by Tom Mulcair -- who won the NDP's top job following Layton's death to cancer barely four months after his historic election performance -- the NDP have reiterated the commitment in 2015.

That was done in two speeches by the NDP leader at the Economic Club of Canada, the first in Ottawa on Jan. 27, and the second in Toronto on June 16.

In the latter address, Mulcair pointed out that the Tories were latecomers to the small-business tax-cut party.

"We tabled a motion to that effect in the House of Commons," he caustically observed. "The Conservatives voted against it."

The tables soon were turned on the NDP leader, however, as confusion arose with regards to his party's position on the general CIT rate.

Hours before his Toronto speech, Mulcair said in an interview on CBC Radio that a New Democratic Party government would raise corporate income tax rates so as to get them "closer to the G7 average."

He then got into difficulty by stating that the average rate across the G7 countries -- the United States, Japan, Germany, France, the United Kingdom, Italy and Canada – was "somewhere" in the range of 18 or 19 per cent, while our country's rate was "12, 13, something like that, right now."

The CIT average for the G7 countries, as calculated by the Canadian Press, is 29.9 per cent -- considerably higher than Mulcair's estimate of 18 or 19 per cent.

And Canada's federal CIT rate is 15 per cent, two or three points above Mulcair's assertion of 12 or 13 per cent.

The business-profits tax rate for the country as a whole, moreover, must include taxes collected by provincial administrations.

At present, the GDP-weighted average across all 10 provinces is 11.8 per cent -- which, when combined with the federal CIT, gives Canada a national average of about 26.8 per cent.

The Tories were quick to pounce on the NDP leader's mis-statement with Joe Oliver, the finance minister, cackling that Mulcair "doesn't even know what the tax rate is and yet he wants to raise it."

Harper weighed in with a snarky observation in the House of Commons: "We shouldn't expect the leader of the NDP to know his facts."

Justin Trudeau won the Liberal leadership in May 2013, and recently has espoused a CIT policy much different than that proposed four years ago by Ignatieff.

On May 11, Trudeau surprised many observers in an interview with the Business News Network (BNN).

He was "proud," he said, that "Liberal governments under Paul Martin and others" had begun to cut corporate income tax rates "because it stimulates growth and investment."

Far from contemplating an increase in Canada's CIT rate -- which was Ignatieff's pledge in 2011 -- Trudeau observed that the country must "stay competitive on the international stage and where we are now is a very good place." [emphasis added.]

Moreover, in the event that the United States reduces its corporate income tax rate, Canada "might have to make [downward] adjustments," the Liberal leader said.

Just as the Tories weeks later would draw attention to Mulcair's musings about corporate taxes, the New Democrats wasted no time going after Trudeau for his remarks.

The release concluded with an observation that looked to be lifted directly from the Conservative playbook: "Justin Trudeau is just not ready. Canadians deserve better."

What is the fiscal impact of the major parties' CIT policies?

Four years ago, during the 2011 general election campaign, Ignatieff and Layton committed to raising the country's corporate income tax rates to 18 and 19.5 per cent respectively, while Harper promised a cut to 15 per cent.

The Liberal platform pegged new annual revenues from their proposed CIT rate at "over $5 billion by the second year of our plan," increasing in four years to "nearly $6 billion."

The NDP platform did not cost the party's tax-policies for corporations and small businesses.

News-media reports, however, said that Layton expected new revenues of about $5.9 billion per annum from a higher CIT rate, offset by yearly losses from a lowered small-business rate of about $1 billion.

The Conservatives' platform also failed to provide a cost for their planned CIT rate cut, because -- it seems -- the pledge already had been made before the writs were dropped.

The Tory platform merely stated that a re-elected Harper government would "not raise the tax rate on the businesses that create jobs for Canadians."

Today, on the eve of the 2015 general election, both Harper's Conservatives and Trudeau's Liberals look to campaign on status quo corporate income tax rates, with no new revenues and no new costs.

Mulcair's New Democrats, on the other hand, stand alone in proposing a higher CIT rate, albeit one that keeps Canada competitive with other industrialized countries.

The current difference between the average of the G7 nations (29.9 per cent) and that of Canada and its provinces (26.8 per cent) is 3.1 percentage points.

Erin Weir, a respected economist with the United Steelworkers and a NDP candidate in Regina-Lewvan -- and likely finance minister in a Mulcair government -- has calculated that each one percentage point increase in the CIT rate could generate an additional $1.6 to $1.7 billion annually.

If so, a three-point CIT rate hike might raise about $5 billion per annum -- and still keep Canada below the G7 average.

However, both the New Democrats and Conservatives also are committed to reducing the small-business income tax rate by two points, to nine per cent.

Four years ago, Layton's NDP pegged the cost of that promise at $1 billion annually. Mulcair likely will use a similar number in his 2015 platform.

For their part, the Tories have calculated -- in the Harper government's latest budget -- that the cost of their phased-in small-business rate cuts will be $2.7 billion over the four-year period from 2015/16 to 2019/20.

This fall's federal election promises to be one of the most exciting in a long while -- historic, even.

It remains to be seen, however, whether there will be a single, dominant issue over which politicians will fight, and the election decided.

Could it be corporate taxes?

The topic may not excite too many Canadians, but as recent events have shown, it provides plenty of ammunition for politicians to savage their opponents.