"This latest move just adds insult to injury to craft beer consumers who are fuelling one of the fastest-growing segments of homegrown, B.C. industry." -- Paddy Treavor, Campaign for Real Ale advocate 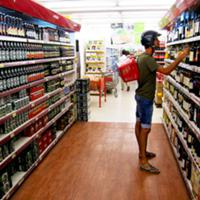 How did the BC Liberals celebrate Vancouver Craft Beer Week that ended Sunday?

The government may well have said "cheers, suckers" when they boosted your brew bill.

Because it was the crafty BC Liberals, who promised booze wouldn't cost more when they changed the liquor pricing system on April 1, that have now actually hiked prices on a stunning 87 per cent of all beers sold in BC Liquor Stores.

And that has beer fans hopping mad.

"Craft beer prices are going up between five and 10 per cent in many cases, yet the breweries are receiving the same amount of money from the government for their products," Paddy Treavor, Campaign for Real Ale's (CAMRA) branch president in Powell River, told me Sunday by email.

"So where is that extra revenue going? Well, we all know where, into government coffers," Treavor says.

"This is yet just another example of the cynical and entitled nature of this government and their short-sightedness in putting more financial pressure on the craft beer industry who are thriving and flourishing despite the BC Liberals, not because of them," Treavor said.

BC Liberal attorney general Suzanne Anton, who is responsible for liquor, avoided media last week but put out a statement claiming the government is focused on "creating a competitive marketplace that will benefit consumers."

"Let's put things in perspective: every month, some prices go up and some prices go down -- just as any other retail cost of good -- but we're talking about cents here," Anton said.

Actually, only eight per cent of beer prices went down, and most of those were foreign beers, according to a survey by the BC NDP. Leader John Horgan says: "It's a tax grab, plain and simple."

The problems began after the B.C. government imposed a new single wholesale liquor price that shocked the industry and angered independent wine stores, cold beer and wine stores, liquor importers and others by dramatically changing the way product is priced.

The result has been higher prices on many products -- hidden by a crafty change to remove the tax from the shelf price for the first time and then add it at the till -- and shrinking profit margins for both private and public liquor stores.

That's one reason why BC Liquor Stores increased craft beer prices with no consultation with brewers -- because they weren't making enough profit on it.

"The government looked at the numbers and thought 'a lot of this craft beer is not very profitable the way we've done things, so we need to increase the margins here,'" said Gary Lindsay, director of marketing and sales for Driftwood Brewery, which saw all its beers go up seven per cent or more.

Treavor, whose advocacy group CAMRA "is dedicated to the promotion and responsible consumption of natural, craft beers" echoes those concerns.

"Many small, local breweries, who operate on a slim profit margin due to huge competition and over-regulation from the government, already had to reduce their bottom line profit for some of their products just to maintain pricing, after the April 1 shift to the new wholesale pricing scheme, so as not to alienate their customers," Treavor told me. "And now the prices get increased without warning to the breweries."

"The whole B.C. liquor policy reform has been a failure on almost every front. I do not know who is advising them, but they certainly did not listen to the industry or British Columbian craft beer consumers during their 'consultation' phase of the liquor reform."

"For many British Columbians this is the second major price hike in a row for craft beer," Treavor said. "Remember the happy hour minimum pricing cock-up, which caused the prices of drink specials and in some cases regular beer prices to rise?"

Anton has previously wrongly blamed suppliers for price increases but now there is nowhere for the government to hide.

And raising beer prices will certainly make sure political trouble is brewing.