It's clear Canadians are deeply unhappy with the way the federal government views the privacy rights of its citizens. Last week, Bill C-51 passed in the House of Commons. It's now before the Senate and is expected to become law within weeks. 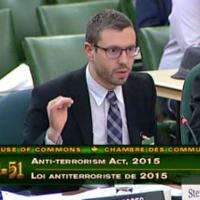 This is a piece of legislation so extreme that experts say it will lead to widespread violations of our charter rights.

Today, OpenMedia, which advocates for more Internet freedom, is launching a privacy plan aimed at rolling back Bill C-51, ending government-supported surveillance and restoring the privacy rights of Canadians.

The report, entitled Canada's Privacy Plan, was the result of a crowd-sourced survey that gathered input from more that 100,000 Canadians. More than 10,000 of you used this crowdsourcing tool to provide detailed input on how you want to tackle our privacy deficit.

Bill C-51 has been widely criticized by Canadian civil liberties advocates. Among other things, it permits federal departments to exchange the private information of Canadians, and makes it easier for police to restrict the movement of suspects.

But Bill C-51 is just one aspect of the alarming privacy deficit the government has created. In the last 12 months, we've seen stunning revelations about how the Communications Security Establishment Canada (CSE) -- the agency that collects foreign security intelligence from the Internet -- is spying on Canadians' private online activities and on private emails that Canadians send to members of Parliament.

If there was one message coming through loud and clear from participants in our crowdsourcing process, it's that Canadians are sick and tired of the seemingly endless series of government attacks on their privacy. As participant Katherine noted: "The pendulum has swung way too far in the direction of limiting our privacy. Standards need to be adjusted to make privacy the default and transparency must be mandatory."

When we asked people to rank six privacy priorities, two in particular stood out: require a warrant for governments to spy on personal information, and end blanket surveillance of law-abiding people. Accordingly, we focused first on tackling these key concerns, while also leaving space to address the range of other problems Canadians raised.

Based on this wealth of grassroots feedback, the report sets out three high-level policy recommendations to roll back our privacy deficit:

Over the next two weeks, OpenMedia will write a series of articles on these recommendations. Already we're seeing the power that these crowd-sourced ideas can have. The report's key recommendations have been endorsed by prominent groups from across the political spectrum, from Greenpeace to the National Firearms Association.

In you're interested in participating in the conversation, you can join leading experts today at 11 a.m. PDT/2 p.m. EDT for a live Facebook discussion about the privacy challenges Canada faces.

For too long, this government has ignored Canadians, undermining their privacy rights while treating the democratic process with contempt. We believe the government is trying to keep Canadians in the dark. But as the debate over Bill C-51 has shown, people have had enough of the government's approach.

It's time to turn things around. Our plan aims to turn this debate on its head and ensure that we have the same high standard of privacy protection for our digital communications as we had in the days of rotary telephones and pen-and-paper letters.

Best of all, these ideas come straight from you. You can view Canada's Privacy Plan right now and add your voice by sending it to key senators as they prepare for their crucial final vote on Bill C-51.