Imagine you've worked hard for the same employer for nearly 30 years, and seen your factory colleagues honoured as top producers. 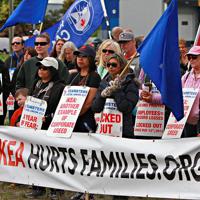 Locked out for a Year, Richmond IKEA Workers Won't Back Down

Now imagine that your employer wants to freeze your pension, cut cost of living allowances, and bring in a divisive two-tiered wage system.

Then imagine that when you go on strike to stop it, your employer brings in replacement workers to do your work.

Dollimore is one of 120 employees at a Toronto beer can plant embroiled in a long strike against their employer, Crown Holdings Inc. On strike since September 2013, Dollimore and her colleagues, members of United Steelworkers Local 9176, rejected proposed changes to their collective agreement, including the introduction of a two-tiered wage system and a salary and pension freeze. (The company later changed its wage proposal to a 30 per cent across the board wage cut.)

Dollimore, who'd worked for the company 27 years when the strike began, said that she and fellow strikers were barely scraping by while replacement workers did their jobs and Crown Holdings profits continued to soar. The U.S.-based packaging giant, one of the world's biggest manufacturers of beer and soft drink cans, posted net sales of over US$9 billion and a gross profit of over $1.3 billion in 2014. CEO John W. Conway was paid US$9.6 million last year.

"The worst day was when the replacement workers started to cross our lines," Dollimore said. "If the company gets away with doing this to us, they'll come after other unionized workers next."

The strike, which pits a deep-pocketed multinational against a small group of employees, may well represent the face of Canadian labour relations in the future. Using replacement workers and the financial heft that comes with being a nearly $10-billion-a-year operation, Crown Holdings has prolonged the dispute for over 20 months.

At a time when owners and managers around the world seem prepared to escalate their class struggle against employees by gutting contracts, imposing two-tiered wage systems and using other ways aimed to weaken unions, the Crown Holdings fight is a worrisome example of what may be coming next for workers across Canada.

Despite the fact that Crown Holdings honoured its Toronto factory workers with its President's Award for achieving the company's most productive plant in 2012, the next year Crown demanded major changes to their collective agreement.

These included the creation of a two-tiered wage system that would see newly hired workers coming onto the production line at a wage 42 per cent lower than the $24-an-hour earned by Dollimore and her co-workers. The employer also wants to abolish cost of living increases.

More recently, media reports suggest the company will insist on keeping most of the replacement workers in the plant even if the unionized workers settle, and only allow a small number of the strikers to return to work.

The Tyee emailed Crown media spokesperson Thomas T. Fischer asking him to comment on these reports, and to explain why his company has not settled with its award-winning employees. Fischer did not respond.

While a 20-month strike is unusually long in Canada, Teamsters locked out for 17 months at an Ikea in Richmond, B.C. would find Dollimore's story familiar.

Like the Toronto Steelworkers, the B.C. Teamsters found themselves in a long, drawn-out face-off with an international firm. To put the pressure on, they asked shoppers not to patronize the Richmond location. The Steelworkers have used similar tactics, promoting a global boycott of beer in cans, given how widely Crown Holdings containers are used in the beer industry.

The final results from the Ikea lockout -- which saw the union sent back to work by a mediator and locked into a 10-year contract, with replacement workers allowed to keep their jobs -- were not very encouraging.

It remains to be seen whether public support for the union-sponsored boycott can generate enough pressure on the company to win Dollimore and her co-workers a satisfying settlement.

Some critics of the union, who decry the boycott strategy as a distraction from more militant approaches, suggest that Steelworker leadership is failing to fight hard enough for the interests of the Toronto workers. 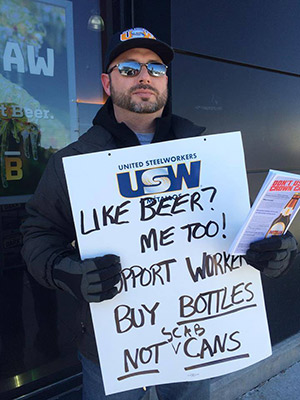 Union workers have been on strike from the Toronto plant since September 2013. Photo: United Steelworkers.

A local labour expert echoes the concerns of these critics about diminished militance in the Canadian union movement. "Unions are going on strike a lot less now than they were 30 to 40 years ago, and that may well embolden employers," said Simon Fraser University's Mark Leier.

Leier said he worries about some tendencies within current labour leadership to undervalue rank and file militancy and overvalue the role of "messianic" leadership in labour disputes, especially where employers are big multinationals. "Workers should not rely on messianic figures at the top of their unions to lead them out of the wilderness," he said.

'As real as it gets'

Be that as it may, it seems likely that more unionized workers in Canada will find themselves in positions similar to Ikea and Crown Holdings employees, as large employers use their economic heft to roll back wages and benefits won over decades of contract negotiations.

Perhaps David can battle Goliath with the help of consumer boycotts. Or perhaps what's needed is a return to the more militant approaches seen in the middle decades of the 20th century, when mass picket lines at times made it impossible for employers to get "replacement workers" into the workplace. Or perhaps a new generation of unionized workers will invent tactics yet unseen.

But if none of that happens, millionaire managers like Crown's Conway will continue to grow rich; and hardworking, loyal employees like Dollimore will continue to look from the snowy sidewalk at locked gates barring them from the workplace to which they gave their lives.

"If this company is able to remove organized labour from their premises by simply budgeting for production loss, and then forcing unions to strike with irrational proposals, and then restocking the plant with replacement workers, then the labour movement is really in a lot of trouble, said Ken Hetherton, the president of Dollimore's local.