Poor Justin Trudeau. During his infamous coalition flip-flop, he looked like a deer caught in the proverbial headlights. He just didn't know which way to run. He's still in the spotlight, and will be until he tries again to navigate the most vexing issue he is likely to face in the next six months of electioneering. 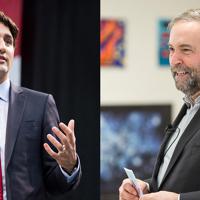 Suck It Up, Progressives: We Need a Coalition Now

He and his brain trust know that this question is not going to go away. It's going to hang over his head right up until the election. The civil society groups and others who cannot bear to even imagine another Harper government will continue to up the ante, and his dodging and bobbing will wear thinner and thinner.

The NDP's Thomas Mulcair doesn't much like the idea of a coalition or accord with the Liberals either, but he was smart enough to get on the right side of history on this issue precisely because he knew it wasn't going away -- especially amongst NDP voters. After showing little interest for ages, the New Democrat leader recently stated he was open to an agreement of some kind without specifying an accord or a coalition, pre- or post-election.

The advantage for the moment is distinctly Mulcair's, as he gradually rolls out policies which distinguish the NDP from the Liberals and the Harperites. The "interrogator" is already a superior politician. With a package of bold (or at least principled) policies, he could put Trudeau increasingly on the defensive.

If he is looking for some steel to put in his spine in this regard, he need look no further than the amazing rise of Rachel Notley in Alberta. Notley is in a dead heat with her rivals. And she has done it with policies the pundits have long claimed would be a death wish: reviewing royalty rates for oil and gas, withdrawing support for the Northern Gateway pipeline, freezing tuition fees, and increasing corporate taxes.

If Notley can pursue these policies in arch-conservative Alberta without being pilloried, then why can't Mulcair capture voters' imagination nationally with the same approach?

If the NDP is to do well, it has to capture a chunk of the progressive vote that historically went to the Liberals. Mulcair has made a start with his pledge to raise corporate taxes, to tax CEO stock options as normal income, oppose the Secret Police Act (Bill C-51), establish a $15 minimum wage, oppose the Northern Gateway pipeline and recommit Canada to a new Kyoto-type accord on climate change.

The more Mulcair follows this progressive track, the more Trudeau will eventually be forced to follow suit in order to keep his left flank intact. When -- not if -- Trudeau makes some strategic policy moves to undercut NDP progressive initiatives, he will also be eroding his only serious rationale for rejecting an accord: "There's too many big issues on which the NDP and Liberal party have deep disagreements." He goes on to mention trade, economic growth and the constitution differences over Quebec.

The only decisively different position is on Quebec. On trade, both leaders (regrettably) support most deals, but Trudeau supports the nefarious investor state provisions (allowing corporations to sue governments for lost profits) in CETA and other agreements, while Mulcair opposes them. This is the very feature which is now threatening to scuttle CETA, and Trudeau may have to reconsider his position.

But whatever the differences on these points, there are plenty of big issues on which the NDP and Liberals could co-operate -- enough to form the basis of a post-election accord. For starters, there is one leftover from the Martin government that Trudeau might have trouble rejecting: a national child care program.

And there are others from the 2008 coalition agreement that should still form the basis of co-operation:

There is very little separating the NDP and Liberals on these key policy areas. Indeed, the Liberals recently acknowledged that they might move away from the balanced budget obsession of the Harper Conservatives. In what seemed like a trial balloon, senior Liberals lauded a Toronto talk by Lawrence Summers (former head of the World Bank and Clinton's treasury secretary) where he pitched the notion of "inclusive prosperity" -- an overt attack on the austerity policies of Western governments. Trudeau and Mulcair are already in agreement on scrapping Harper's income splitting and reversing the increase to the Tax Free Savings Account.

So the argument that the two parties are too far apart on key policies will become increasingly difficult to maintain, and the more Mulcair pitches the accord proposal (if he does), the more Trudeau will look like he cares more for his party than he does about ridding the country of Harper. Recent polling puts public support for a coalition at 74 per cent.

The most interesting outcome

If the Liberals win a plurality in October, it is unlikely that any kind of formal agreement with the NDP is in the cards. But the outcome might look the same in any case. The Liberals always run from the left and -- if they win a majority -- govern from the right. But running from the left and gaining only a minority makes governing from the right much more difficult, especially when another significant party shares many similar policies as the NDP will.

The most interesting outcome, however, will be a narrow Conservative plurality and a minority Harper government. This outcome will beg for a vote of non-confidence and a coalition government of some description early in the new parliament. The legitimacy of such a move will be obvious. In 2008, there was a major barrier to the legitimacy of a coalition: the Conservatives were ascendant -- gaining seats from the previous election, and the Liberals had taken a beating.

The idea of Stéphane Dion, the clear election loser, becoming prime minister was an easy target for Harper. But this time around the Conservatives will have lost seats and the Liberals (now at 33) will likely have tripled theirs. That makes a non-confidence vote and the formation of a new government far more legitimate. Then the question will rest on how badly Trudeau wants to be prime minister.

The coalition scenario is Trudeau's best shot at becoming PM. If Harper wins a minority and Trudeau is leader of the official opposition, all his weaknesses will be on display: his intellectual shallowness, his wooden performance, his lack of believable passion on any issue. The longer Trudeau remains in that position, the more the Liberals risk losing ground to the Conservatives (with a new leader?) as they approach the next election. Trudeau will not want to be the third Liberal leader in a row to fail to become PM. He will need Mulcair to secure that post even if he is loath to admit it.

The best possible configuration after Oct. 19? Barring an NDP minority government, the best case scenario is as many NDP seats as possible. The more seats the NDP has, the more likely the coalition/accord scenario becomes. That, of course, will be up the NDP to achieve, and as the fear and loathing of another Harper government looms large they will be forced to play the coalition card ever more prominently. Polls this week have already seen the NDP draining support from the Liberals and show growing support for a coalition to supplant the Conservatives. The two results may well be connected.

What is maddening about our "democracy" is that ordinary citizens -- who should determine their future -- feel completely powerless to affect the change they want. But it doesn't have to be that way. A number of civil society groups are putting unprecedented work into strategic voting efforts this time around. Prominent among them is Leadnow, a bunch of young, tireless, smart activists (with 400,000 followers) who are collecting pledges from thousands of Canadians -- "people who have voted NDP, Liberal, and Green, first-time voters, and even some unhappy Conservative voters" -- to work to elect the candidate with the best chance of beating Conservatives in swing ridings.

Leadnow founder Jamie Biggar states: "We're showing the parties how people can work together across party lines for the common good, and we're cooperating to overcome our broken first-past-the-post electoral system by voting together to elect the best local candidates who can defeat the Harper Conservatives." History is made by those who show up. Tired of being on the sidelines? Sign the pledge.