Wasn't it always the student who kept asking for extensions on homework who always wound up turning in the poorest quality work? Finance Minister Joe Oliver tabled the 2015 federal budget on Tuesday, using some "creative" accounting to scratch out a small surplus. But despite taking a two-month extension, everyone from mainstream economists to First Nations to the YWCA to unions and ordinary Canadians are giving Mr. Oliver a failing grade on his first federal budget. 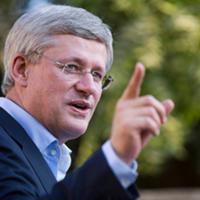 Packed with tax breaks for wealthy Canadians, and back-loaded with promises that won't pay out until four or five years from now, Tuesday's budget is entirely an election document and little more. Nothing new or unexpected, and perhaps this is why Mr. Oliver's first budget, in returning to balance, is so disappointing.

It's a missed opportunity.

Mr. Oliver's balance comes after six consecutive slash-and-burn deficit budgets, $14 billion every year in cuts from the services Canadians rely on from their government. These are cuts to the CBC, to policing, to veterans, to oil spill response, to healthcare, to food and rail safety, and the list goes on.

Meanwhile, Canada's economic outlook is anything but rosy. The price of oil is forecast to remain low, while the Conservatives continue to bet the farm on raw oil exports. Unemployment is on the rise, job quality is the lowest in a generation, and pay inequality is increasing. The governor of the Bank of Canada recently referred to the effect of the oil price slump on our economy as "atrocious." Almost three-quarters of children under five have no access to affordable, quality childcare. Eleven million Canadian workers have no access to a workplace pension, and we've lost 400,000 manufacturing jobs since Mr. Harper was elected.

What is the Conservative solution? A $2.5-billion income splitting scheme that only benefits 15 per cent of Canadian families, and benefits go toward the wealthiest few. Or doubling the Tax Free Savings Account, a move the Parliamentary Budget Officer shows will benefit the richest 20 per cent almost five times more than middle or low income Canadians.

And nothing to help tackle the alarming (and growing) phenomenon of child poverty in our country. Nothing to help 1.3 million unemployed Canadians find work and make ends meet. Nothing to transition Canada to a more innovative, sustainable economy. Nothing to boost marine safety and Coast Guard response on our coast, so we can better prevent and respond to emergencies like the one experienced earlier this month with the Marathassa spill in Vancouver. And no action on protecting our oceans, wildlife habitat or our air -- the phrase "climate change" wasn't mentioned once in the budget, and there remains no help for clean energy in Canada.

The cost of Mr. Harper's expensive, unfair and ineffective new bouquet of tax breaks for the wealthy is not just the price tag attached.

It's also in the opportunities lost.

In British Columbia, the average cost for a childcare space is $1,000 per month per child. In Vancouver, the median monthly fees for one childcare space are almost one-third of a working mother's income. In a country where three-quarters of mothers with children under five are in the workforce, it's a reality that weighs too heavily on many working families. The solution? Affordable, universal childcare -- what YWCA Canada's Paulette Senior calls "the winning ticket," and what NDP leader Tom Mulcair has been proposing since October with a cap of $15 per day per child.

Meanwhile, the Conservatives continue to hitch their cart to bitumen pipelines -- and it's Canadians who keep paying the price for Mr. Harper's poor planning and poor choices when the bottom falls out. Yet we're also presented with an opportunity for Canada to set the course for a more diversified, innovative and sustainable economy. There are booming opportunities for international trade and growth in the generation of clean energy -- not to mention the benefits for our planet -- and Canada has a chance to not only take advantage but lead in the new global clean energy economy. And yet the federal budget doesn't once mention the clean energy sector, which saw $24 billion of investment in the past five years alone, and which employs even more people directly than the oilsands in Alberta.

Tuesday's budget demonstrated, if nothing else, that Conservatives are more concerned with defending themselves from scandals and protecting their own jobs than they are with defending Canadian jobs, our environment, and our future. With this tenth and (hopefully) final Conservative budget, Canadians have had enough. In October, let's give Mr. Oliver and the whole Harper government its final failing grade.