Vancouver just got a small whiff of what a sevenfold increase in tanker traffic could mean for a place aspiring to be the world's greenest city. On a calm afternoon in English Bay this week, a grain freighter at anchor apparently started leaking bunker fuel into the scenic waters off Stanley Park. 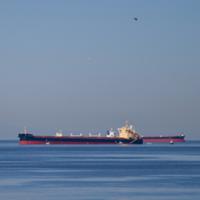 Local residents and their municipal government were not informed for 13 hours. The Coast Guard was ostensibly in charge of the cleanup, but its private sector partners at West Coast Marine Response Corporation took six hours to start skimming the oil and nine hours to put a boom around the leaking vessel.

Making matters worse was the apparently invisible response from the federal government. While the Vancouver Aquarium staff and police boats were doing what they could to pitch in, where were Transport Canada and Environment Canada?

Years of federal downsizing and program cuts have come home to roost. The Environment Canada Environmental Emergencies office in Vancouver was closed by the federal government in 2012 and moved to Montreal. Sixty staff nationwide specifically trained to deal with oil spills lost their jobs.

The Harper government also mothballed the Kitsilano Coast Guard station in 2013 that used to be one of the busiest in the country. This life-threatening decision to local mariners saved Ottawa the whopping sum of $700,000 per year. Coast Guard officials gamely maintained that the closure had no impact on their reaction to the spill. However, a former commander at the station told a local radio station that had the station been operating, the response time would have been six minutes instead of six hours.

Meanwhile, Ottawa is cheerleading virtually every pipeline proposal in the country while gutting the National Energy Board to the point that citizens are now suing Ottawa for denying them due process in public hearings.

The bunker fuel now fouling the shores of English Bay is the barely refined dregs of crude oil and highly toxic. While officials maintain that almost all the oil has been recovered, the fact is that even a successful oil spill cleanup often recovers only about 15 per cent of what is spilled. Two days later and we still don't know what exactly was in the oil, so residents and volunteers are being told to stay away from their beloved beaches, even to try to clean them.

Obviously, a larger spill would have catastrophic consequences for one of the most iconically beautiful cities in the world. Visitors from around the world are drawn to Vancouver's magnificent waterfront, injecting some $4 billion into local businesses each year.

While bunker fuel is bad, diluted bitumen is far worse. Kinder Morgan wants to massively scale up tanker shipments through Vancouver of this hazardous mixture of volatile solvents and tar from Alberta's oilsands.

A major difference is that bunker fuel floats, and bitumen typically doesn't. A relatively small spill of diluted bitumen from an Enbridge pipeline into the Kalamazoo River in 2010 proved to be one of the most expensive inland clean up efforts in American history. Why? Because conventional recovery equipment designed for floating oil proved useless in recovering the thick bitumen that quickly sank once the toxic “diluent” began off-gassing in surrounding area.

This brings us to the second scary difference between bunker fuel and diluted bitumen. More than two-thirds of residents near the Kalamazoo spill began experiencing headaches, nausea, and dizziness after inhaling the toxic fumes from volatile solvents used to thin the thick tar so it can be pumped through a pipeline. Local health authorities declared a voluntary evacuation zone for people within a mile of the spill. What would be the public health implications of a diluted bitumen spill in the Lower Mainland, home to more than two million people? AFRAmax tankers now transiting through the region 60 times per year carry more than 30 times the volume of what spilled into the Kalamazoo River. Kinder Morgan wants to scale up these shipments to more than one per day if its TransMountain pipeline project is approved.

Rather than merely sitting at anchor in English Bay, these tankers must squeeze through the narrow shallow Second Narrows channel with less than two metres of under-keel clearance during a slack-water high-tide window lasting less than 20 minutes. What could go wrong?

Plenty. If a tanker ran aground or struck the pilings supporting the CN railway bridge, the results could be catastrophic for human health, the environment and our economy. Where could two million people flee if a cloud of toxic carcinogenic chemicals began filling the confined airshed of the Lower Mainland? I predict a several sailing wait at the BC Ferries…

Exactly this kind of accident is what a group of local marine experts are worried about. In a letter to the National Energy Board, they estimated a one in 10 chance of a spill more than 8.25 million litres over the 50-year lifespan of Kinder Morgan's project. That is about 2,500 times larger than the 3,000-litre spill that just happened in English Bay.

The chances of containing an accident like that are essentially zero, as evidenced by the bungled response to a relatively minor spill of comparatively benign bunker fuel. A large bitumen spill due to a bridge collision would quickly be carried out into the Strait of Georgia, propelled by a five-knot tidal current. This would be devastating for abundant local marine life. Just last month, a pod of orcas was spotted hunting off the Stanley Park seawall.

Worse still, Kinder Morgan is refusing to release details of its emergency response plan even to local governments, citing “personal, commercial and security reasons.” Naturally, our federal regulator sided with the company when the City of Vancouver petitioned the National Energy Board for this critical information.

While pipeline projects are portrayed as an economic imperative, an oil spill would be economically disastrous if it closed Canada's busiest port for a protracted cleanup. Parts of the Kalamazoo River remained closed three years after the Enbridge spill as crews dredged the sunken tar from the river bottom.

Anyone who still thinks that bitumen tankers pose no risk to our coast, or that Ottawa sincerely cares about protecting our environment should go down to English Bay and inhale deeply. That could be the smell of our oily future.