The B.C. government has launched yet another school war with Bill 11 and the continued underfunding of school districts. It's going to be an ugly one, in large part because the BC Liberals are still trying to win a stupid feud that W.A.C. Bennett started 50 years ago. 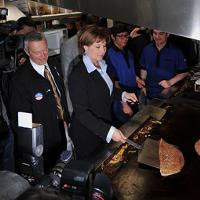 As discussed in yesterday's Tyee column, Bill 11 appears to threaten student privacy, cripple school boards' autonomy, and remove teachers' control over their own professional development. The head of the B.C. Teachers' Federation, Jim Iker, told The Tyee he's baffled by the bill. Why would a government that just achieved a hard-fought contract settlement with teachers introduced it? "I thought they wanted labour peace," Iker said.

The roots of this conflict arguably began way back in the mid-1960s, when the Social Credit government of Wacky Bennett used the teachers' pension fund to invest in its own hydro projects, launched as part of the the Socreds' infrastructure projects of the 1960s. They were great projects, but the teachers had been effectively shanghaied into helping fund them.

The teachers thought that a four per cent return wasn't good enough; at that point, a teacher with 35 years' service could look forward to retirement in the 1970s and '80s on a pension of $275 a month (about $2,077 in 2015 dollars). Teachers might be able to look forward to cheaper hydro bills in their golden years, but the takeover of their pension fund for the Socreds' political benefit rankled.

Bennett refused to hand over control of the fund to the teachers, and in 1968 he made matters worse by freezing school construction. While he had presided over an explosive expansion of the B.C. schools to serve the baby boom, Wacky's heart had never really been in it. Only pressure from parents of the first boomers had goaded him into building enough schools so kids didn't have to go on attending classes in shifts.

If Bennett and his Socreds disliked teacher partisanship and militancy, they had only themselves to blame. The construction freeze was just the first in a series of arbitrary changes, all of them designed to reduce education costs and limit teachers' professional freedom. The old man escalated the conflict in the late 1960s just as Lyndon Johnson was escalating the war in Vietnam, and with similar results: Johnson drove himself from office in 1968, and Bennett lost to Dave Barrett's NDP in 1972.

I owe much of this account to a fascinating Master's thesis written in 1979 by Marlene Ingrid Yri. After 35 years, her catalogue of the causes of the school wars still sounds depressingly contemporary:

Restrictive government education policies; particularly the removal by legislation of automatic membership provisions in the BCTF and the elimination of teachers' collective bargaining rights;

Societal trends -- the late 1960s and early 1970s were times of protest and rejection of the status quo. These trends and the increasing militancy of other teachers in Canada influenced the B.C. teachers to consider anti-government protest action.

A power struggle within the BCTF; between the hired General Secretary, who had held the position since 1947, and the elected Executive Committee, attempting to wield the power it was entitled to according to the BCTF Constitution. The struggle was won by the elected members, who were then successful in influencing the rest of the membership to take radical action against the government.

An increase in wealth and expertise in the BCTF; from 1966-1972, the budget of the BCTF doubled, and this helped to increase the capacity of the organization. Now it became possible to hire experts to help organize political protest action... The anti-government campaign of 1972 became a viable alternative to more conventional interest group activity.

The Department of Education's seeming incompetence. From 1965-70, eight new junior colleges and two new universities were instituted by the B.C. government; Deputy Education Minister Dr. Neil Perry was said to have neglected the public school system in favour of post-secondary education. The Department was unable to stretch the education budget to take care of this added load plus the rapidly increasing public school enrolment. Education Minister Donald Brothers antagonized the teachers and imposed measures to try to weaken the BCTF. These departmental inadequacies influenced the teachers to take anti-government action.

If militancy has dominated the BCTF for half a century, it is only because Wacky Bennett's blend of small-town B.C. populism and downtown Vancouver money has been equally long-lived. The Socreds were great believers in running government "like a business," and that included education.

Wacky's son Bill Bennett brought the Socreds back in 1975, and the school wars resumed. His 1983 "restraint" program nearly triggered a general strike. The rest of the decade was a bitter period and Bennett wisely resigned before he could be booted out like his father.

When Social Credit ran out of steam under Bill Vander Zalm, its backroom boys bided their time. Gordon Wilson, a Capilano College colleague of mine, had rebuilt the provincial Liberals almost as a hobby, and then (he once told me) got an offer from the backroom boys to hand it over.

It was an offer Wilson couldn't refuse, but he refused it anyway. The backroom boys took his hobby away from him, installed Gordon Campbell, and launched a rebranded Social Credit -- complete with a resumption of the Bennetts' business-oriented vendetta against the teachers.

Through 50 years of enormous social and technological change, that vendetta has remained immune to experience and education alike. The BCTF's militancy is not the result of a handful of radicals bamboozling the dimwitted rank and file. Anything less than militancy would mean leaving the profession or leaving the province. Every teacher in B.C. since the 1960s has personally suffered, financially and professionally, from the Socred/Liberal vendetta: budget cuts, worsening salaries, a failed education commission, and a growing rift between teachers' trust in their own professional judgment and the government's preference for high-stakes standardized tests.

Clark has found supporters in an array of right-wingers who prefer the Global Education Reform Movement's obsession with tests and standardization, reducing education to numbers on a spreadsheet. In the perspective of the past century, they seem closer to the colonial elite of 1915 than of 2015: a century ago, educated people were a luxury import from Britain or Ontario, paid for by the physical labour it took to cut the trees down and pull the fish out of the sea.

The idea of educating our own professionals did not register with B.C.'s political masters for a long time. I recall in 1967, my first year at the old Vancouver Community College at 12th and Oak, being told by an administrator that we would be training our students for "boring jobs," not for management or the professions.

If Yri's reading of events is accurate, the truth of our school wars does not lie "somewhere between" the teachers and the Socreds and Liberals. They are the result of a deep-seated, almost tribal disdain among B.C. right-wingers and their business supporters, who mistrust teachers and loathe the very militancy that their mistrust has provoked.

It's especially ironic since teachers as a profession are highly conservative. Education itself tries to conserve and transmit the best in human thought and experience, and it does so with techniques scarcely changed since the ancient Greeks. ("Socratic dialogue" is still considered very hip in our universities.)

Had the Socreds and their Liberal heirs ever decided to treat education as a solution and not as a problem, teachers would have happily settled down to routine lobbying for better supplies and working conditions, while governments basked in B.C.'s reputation as one of the best education systems in the world.

Instead, the tribal disdain of teachers continues, expressed in Bill 11 and the ongoing underfunding of the B.C. schools -- ensuring another half-century of school wars.