A storm of criticism has engulfed the Harper government's Bill C-51, the Anti-Terrorism Act. 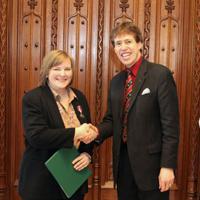 One of the leading points of contention is whether peaceful protesters will be caught up in the wide anti-terrorist net cast by the new legislation.

Opponents point to the expansive definition of national security threats that would now include ''interference'' with ''critical infrastructure'' or with ''the economic or financial stability of Canada.'' They suggest this could include, for example, First Nations and environmental protests against pipeline megaprojects. It's no surprise these groups feel anxious. Among other things, C-51 provides for increased information sharing, an expanded no-fly list, and new CSIS powers, including secret judicial warrants that permit agents to use any means -- even break the law -- to reduce threats.

Until Friday, the government's position was entirely dismissive. Public Safety Minister Steven Blaney bluntly asserted: ''These allegations are completely false and, frankly, ridiculous.'' Again and again, government spokespersons cited a clause defining what a security threat isn't: ''For greater certainty, it does not include lawful advocacy, protest, dissent and artistic expression.'' For Mr. Blaney, case closed.

In the first indication of willingness to bend in the face of criticism, A CBC report suggests government may soon amend the bill to ''narrow the scope of what might be captured as a terrorist-related activity.''

Before declaring victory, critics should recognize that even if a ''lawful'' protest is defined more generously, there is a much bigger problem here. ''Lawful advocacy, protest or dissent'' -- already present in the CSIS Act -- is a flimsy shield against intrusive surveillance of peaceful protest, as a quick look at history attests.

The case of Quebec separatism offers a telling example. Following the 1970 October Crisis in which the federal government had been caught unprepared for kidnappings and assassinations by the terrorist FLQ, orders went out from the federal cabinet to the security service -- then a section of the RCMP -- to step up its surveillance of violent separatist activity in Quebec and to ''counter'' such activity by means left up to the Mounties.

Separatists like the FLQ were genuine threats to national security. But the Parti Québécois also sought to gain Quebec independence, by peaceful and lawful means, and was elected the government of Quebec in 1976. The PQ represented a threat to national unity but not to national security. The security service was sent conflicting signals from Ottawa, sometimes not to target the PQ as such, but also to follow the violent separatists wherever they were to be found -- even when they were hiding in plain sight inside the PQ. Consequently, PQ offices were burgled and their membership lists stolen and copied by the Mounties. Much later it became known that the second-in-command of the PQ government, Intergovernmental Affairs Minister Claude Morin, had been a secret informant for the RCMP.

Illegal "dirty tricks" by the RCMP caused serious scandal, and it seemed the PQ as well as the FLQ had been targeted. The idea that Ottawa's secret police were spying on the democratically elected government of Quebec was a serious embarrassment for the federal government in its struggle to maintain national unity.

In 1984, the security service was taken out of the RCMP and reconstituted as a civilian agency. The CSIS Act empowers CSIS to investigate specified threats to the security of Canada (espionage, terrorism, and so on) which do not include ''lawful advocacy, protest or dissent.'' This clause was hailed as a step forward in advancing the right of peaceful dissent in Canada.

But the lawful advocacy clause has a qualification: ''unless carried on in conjunction with'' any of the activities specified as threats. This qualification is crucial. Surveillance of the PQ could have been justified retroactively by the CSIS Act. After all, the legitimate threats to national security posed by violent separatists could only be tracked by following them wherever they operated, even in the PQ.

How has the CSIS exemption for lawful advocacy operated in practise? We don't know for certain, but some cases suggest it is a flimsy shield for protestors to rely on. For instance, peaceful protestors at the G-20 Summit in Toronto in 2010 were under surveillance by a number of policing agencies, including CSIS. More than 1,000 people were swept up in the largest mass arrests in Canadian history; almost none of the charges were sustained in court. The excuse for intrusive surveillance of the protests at large was the presence of Black Bloc "anarchists" who, unlike the majority of protestors, were determined to provoke violence. Targeting a few bad apples justified targeting the entire barrel, the lawful advocacy exemption notwithstanding.

Finance Minister Joe Oliver has publicly warned of the dangers posed by ''environmentalists and other radicals'' and the government has attacked the legitimacy of ''foreign-funded'' environment groups. A new Integrated National Security Enforcement Team (RCMP-led with CSIS participation) has been established in Edmonton and is dedicated to critical infrastructure protection. A leaked RCMP intelligence report sees the ''anti-petroleum'' movement as a security threat, citing the potential for violence. Another declassified document shows CSIS assisting the government in developing a ''proactive” stance toward potential violence against pipeline projects.

What does C-51 mean for environmentalists and First Nations opposing pipeline megaprojects? The government can never rule out the possibility that even a few protestors might in future resort to violence. The point is that an exemption for lawful advocacy, protest and dissent would mean precious little once a potential threat of violence is detected -- however remote and however small in relation to the larger protest.