"If you can't spot the sucker in your first half hour at the table, then you are the sucker." -- Rounders poker movie, 1998. 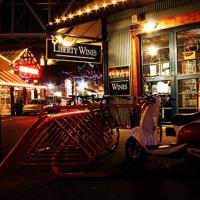 Forget about alleged BC Liberal government "incompetence" handling impending April 1 liquor price increases, Sunday openings for government stores or anything else. It's all a red herring.

There is only one fundamental shift coming in B.C liquor policy and it is enormous, replacing the existing system of public and private beer, wine and spirits stores with a near-monopoly for supermarkets.

There is no real incompetence -- it's simply a distraction to fool the suckers.

What does exist is a Machiavellian plan to eventually wipe out most private and publicly owned liquor stores and move the majority of booze sales to grocery stores.

The BC Liberals are picking winners and losers with its policies, which are far from free enterprise -- since the "competition" is government-controlled.

And the benefits the B.C. government gets are huge: continue to reap windfall profits from North America's highest liquor prices while jettisoning unionized labour costs in government stores and the troublesome patchwork quilt of small private stores.

The strategy is cunning and deceptive, with an allegedly consumer-friendly face promising "convenience" while increasing government profits and making sure the suckers -- the customers paying far too much per bottle already -- even thank you for it!

BC Liberal attorney general Suzanne Anton announced the changes in March 2014 as part of the government's "modernization" of liquor laws.

After recent talks with a wide range of people from private and government stores, liquor import agents, restaurants and bars and other players, the realization is sinking in that the only true winners are the ones not yet sitting at the table -- supermarkets.

But they are about to be dealt a winning hand by government and the pot is huge -- B.C. Liquor Distribution Branch sales net the province $1.2 billion -- on gross sales of about $3 billion.

Not all in the industry are ready to speak on the record but Jeff Guignard, executive director of the Alliance of Beverage Licensees of B.C., was.

"If supermarkets get a full suite of products, it's private stores and government stores that will suffer -- that will lose sales," Guignard said in an interview with The Tyee in mid-March. "Sixty-five to 70 per cent of wines in open markets get sold in grocery stores."

Guignard predicts that supermarket liquor stores will trigger a clash between remaining private and public outlets.

"Then government stores will fight harder against the privates stores," he says. "But private stores employ 10,000 people -- why would you put that at risk?"

The government offers two models for grocery store sales -- buy an existing private or public liquor store and relocate within the supermarket or sell only B.C. wines on existing supermarket shelves.

But that latter plan is already under siege by winemakers in other countries like the United States, who say it violates several trade agreements.

Guignard has no doubt foreign wineries will win.

"There will be huge pressure to open grocery stores to all wines -- not just B.C. wines," he told me. "Ultimately, less B.C. wine will be sold, not more."

That's because the big wineries and their agents will demand supermarkets give them premium shelf space, promotional deals, advertising and other marketing advantages that a small B.C. winery simply can't offer. And with French, American, Italian, Spanish and other big wine producers enjoying huge economies of scale, B.C. wines will cost more.

The union representing government liquor store workers actually applauded the new BC Liberal policies, including allowing government stores to open on Sundays, have longer hours and sell cold beer and wine -- all of which will hurt private store sales.

But B.C. Government and Service Employees Union members' jobs are not really secure beyond the expiry date of their current contract in 2019.

And government stores' ability to compete with supermarkets while paying workers considerably more in wages and benefits than grocery store clerks make is questionable at best, given that B.C. is implementing a single wholesale price for all stores as of April 1. Previously there were separate discounted wholesale prices for different private liquor store categories but now there's just one -- and public stores are being told to compete or close.

The supermarkets are gearing up -- food giant Loblaws has lobbyists registered on liquor issues and others are likely to follow.

None of it will happen overnight -- that would be too obvious, too dangerous. It will take place over a few years.

And there is still a chance the BC Liberals will bail out at the last moment, as they did after promising complete privatization in 2002. Back then, the government reneged after many LRS owners and investors spent serious money preparing to see government liquor stores closed and their own stores expand or new ones established.

Then-finance minister Gary Collins and then-premier Gordon Campbell got cold feet when they saw big risks to the government's liquor sales revenue stream after the BC Liberals' vaunted 25 per cent income tax cut blew a giant hole in the budget and forced a 0.5 per cent sales tax increase to compensate. Risking a big dip in liquor income just to keep a political promise was too big a stake then.

This time, the only outside chance of public and small private stores surviving this game is if consumers get wise to being played for suckers -- to protest the coming higher prices, smaller selection from fewer suppliers and reduced service.

But the BC Liberals, just like governments in other jurisdictions, believe that you won't care that you are paying several dollars more for the convenience of buying beer, wine and spirits in your local grocery store.

Or that if you do notice, you'll just sigh and have another drink rather than do anything about it.